Less than two years after Berkeley’s Sketch Ice Cream (2080 4th St.) reopened on Fourth Street, the popular soft-serve ice cream specialist is saying goodbye again. Last week, owners Eric Shelton and Ruthie Planar-Shelton announced that Sunday, July 6 will be the last day for their retail store — and this time the farewell looks like it will be final.

“This will be the end of the road for Sketch,” the husband-and-wife tandem wrote on the shop’s Facebook page. 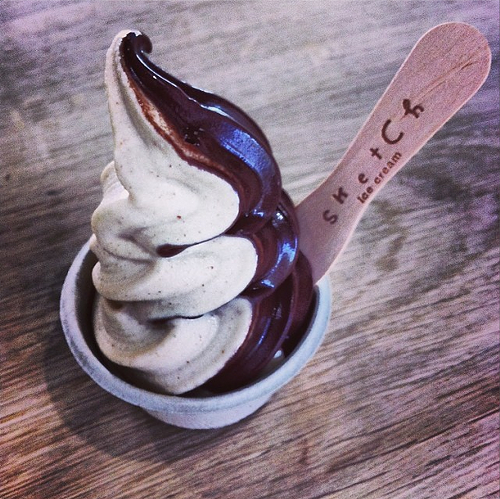 The sudden announcement came as a shock for fans of Sketch’s soft-serve ice cream, which is notable for its purity of flavor, smooth texture, and surprisingly refreshing quality — the product of a scratch-made ice cream base made with no egg yolks, and with milk rather than cream. (The soft-serve sorbets are pretty great too.)

The first time Shelton and Planar-Shelton closed shop, in 2009, it was so that they could carve out more family time after their daughter, Audrey, was born. When reached by phone this morning, Shelton told What the Fork that the latest decision was again motivated by a desire to prioritize family — to not have to miss school functions and weekend outings. It wasn’t a financial decision, he stressed.

“I’ve been in the kitchen for twenty-four years — that’s a long time,” Shelton said. “It’s time to have some weekends off.”

Sketch will continue to do catering and online sales (of candies, cookies, and ice cream cakes) for a short time, but those aspects of the business, too, will shut down by the end of the year. Shelton said he and his wife haven’t figured out their next step yet. While it will likely be food-related, it definitely won’t be a retail business, Shelton said.

For Sketch’s final week, Shelton said the ice cream shop will rotate through some of its most popular flavors — yogurt ice cream tomorrow, for instance. The store will be open its regular hours, unless the ice cream sells out early. Longtime regulars will want to pay a visit to say goodbye, and to snag one last taste.

ETA: Updated hours for this week.