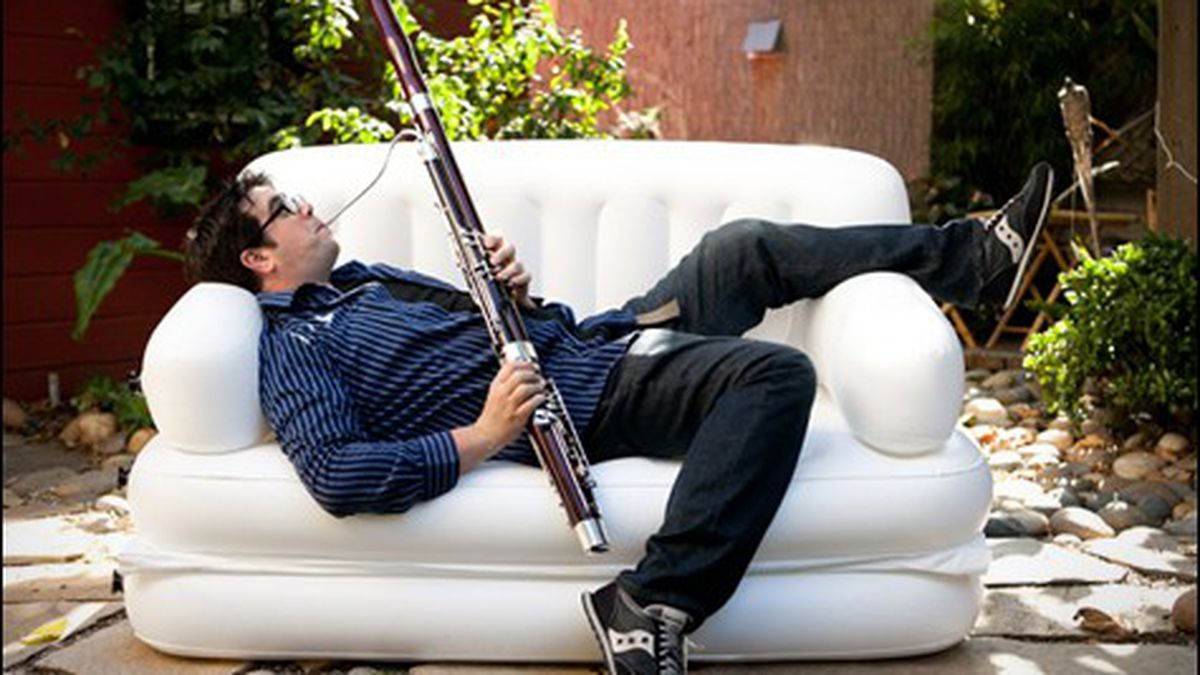 Local singer-songwriter Scott Alexander likes handing out cookies to strangers. But he doesn’t want to appear creepy. So he usually posts up on a street corner with a green inflatable couch, and waits for people to catch his eye. If they do, he’ll make the first overture: “Hi, I’m Scott — would you like a cookie?” As a friend-making gambit, it’s a little weird. But it seems to serve Alexander well as a form of guerilla marketing. After all, he has managed to attract many random people to his shows, even though he doesn’t have a publicist, a label, a band to back him up, or a ton of sex appeal.

In fact, Alexander would characterize himself as a competent but not phenomenal musician. Most of his imagination gets funneled into lyrical content and creative forms of self-promotion. When Alexander got frustrated with a fairly established Brooklyn producer who, he said, was screwing him over, he took the dude to People’s Court — and brought cookies for the bailiff. When he wanted Express writers to check out his recent gig at the Stork Club, he posted sock-puppet videos on our Facebook pages. (The one on my page had a sock puppet quoting things I’d written about Alexander in the “Local Licks” column — namely, that his entire album was a ruse.) When he needed a concise way to introduce himself to the music-listening public, he combined video footage of several stunts and turned them into an autobiographical montage. It begins: “I grew up in the tough streets of Mendota Heights, Minnesota ….”

It doesn’t take deep psychoanalysis to understand why Alexander resorts to such antics. “I’m vegan, I’m married, I don’t drink alcohol,” the singer said, defining the limitations of his social sphere. Also: His primary instrument is the bassoon. Not exactly conducive to being a rock star.

That said, the singer has made a pretty good go of it. Originally a saxophonist, he switched to bassoon in high school, partly because of the instrument’s high-culture cachet, and partly because he thought it would land him a college scholarship — which it did, to the Peabody Conservatory in Baltimore. Midway through his undergrad studies Alexander grew weary of the rarefied classical music world, so he transferred to the ethnomusicology department at UCLA. He also adopted the California lifestyle by going vegan (although he wouldn’t eat his first salad until three years later) and becoming a rock star.

“Rock star,” of course, is a relative term. Alexander started playing guitar and writing songs at age fourteen. Throughout his conservatory career, he lived a parallel life as a garage musician. The two things may have informed each other, but they required opposite mindsets. “With bassoon I learned technique, and subtlety, and practiced scales for hours and hours and hours,” he said. “With guitar I just moved my hands around.” He said he has trouble playing with other musicians because he doesn’t like following rules — or time signatures — and he’ll never play a song the same way twice. So he mostly performs solo, in typical singer-songwriter fashion, and plays a repertoire of mostly original material. He’s cut four albums so far: Scott Alexander Makes Mistakes, Scott Alexander Makes Friends, Scott Alexander Makes 7 or 8 Dollars, and Scott Alexander Makes a Big Deal Out of It. Occasionally, he’ll bring out the bassoon and try his hand at “Flight of the Bumblebee.” Sometimes he’ll even regale audiences with the suona, a double-reed Chinese folk instrument that he learned in college. He said it’s a great party trick.

In person, Alexander is chatty and self-effacing. His round face and rounder glasses give the impression of someone who either emerged from a Norman Rockwell painting or belonged to the UFO club in elementary school. (The latter is true, in fact.) He has an extremely realistic conception of his abilities as a musician and of his appeal as an artist. “I’d say on average, about 15 to 20 percent of the people who promise to come to each of your shows actually do show up,” Alexander said, after scolding me for not attending the Stork Club. (The sock puppet trick was cute, but ultimately ineffective.) On the surface, he seems rather benign.

It’s only when you delve into the guts of Alexander’s lyrics that their sheer bizarreness starts to come through. Take the song “My Little Pony,” which spawned from a bedtime story he told to his wife, Rebecca. In the story, Rebecca is a pony who crosses paths with a giant porcupine named Scott. The porcupine warns the pony that she’d better retreat, lest she get pricked by one of his giant quills. But they fall in love anyway, and the pony suggests that the porcupine shed a few spines (I wouldn’t care if you looked softer without hair/I’m searching for the softness under there). So the porcupine cast off all his quills, save for the big one between his legs — which he shot straight onto the pony’s forehead. She became a unicorn. “So the song is about a pony getting impaled by a giant phallic symbol,” Alexander summarized. Freud would have a ball.

And there are others: “Why Are You So Horny?” which puts a new twist on a timeworn theme — that of the sweet, sensitive balladeer who falls for a promiscuous hot girl, and gets jilted. (Consider things, like why’d you get that tongue ring? Does it help you do something?) Or “You Are Not a Market,” which is about Alexander’s complex and conflicted relationship with self-branding. Granted, all of these themes might qualify as conventional, but Alexander’s treatments make them singularly personal and weird. Add to that the intonation of his singing voice, which sounds uncannily like an amateur singer-songwriter trying to impersonate Neil Young. No matter how quirky the lyrics, Alexander always makes them seem heartfelt. If he’s trying not to repel people, that’s probably not the way to go.

Alexander is convinced he can make it work. Others have, he insists. “Like They Might Be Giants,” he said, pointing to the most obvious example. “Their music is kooky, but it’s accepted. I want my music to be awkward and emotional, and have some kind of humor about it.” He says the odd marketing schemes go hand-in-hand with his goal to be, well, a little left of the norm. Like the whole cookie thing — it’s a more intimate way to market oneself than, say, standing on a poster looking stoic in a field of wheat. “It’s more than just ‘for my music,'” Alexander argued, saying that cookies do, indeed, help him make friends. They almost qualify as a separate piece of performance art.

But he also wants people to know that he’s more than just a guy on an inflatable couch with a plate a free sweets. He even wrote a ditty about it, which he used to promote the album release for Scott Alexander Makes 7 or 8 Dollars. The theme could be summed up in one lyric: There’s more to me than cookies. &#8;

Facebook
Twitter
Previous articleOakland Police to Jean Quan: Can’t We Take the Day Off, Too?
Next articleOngoing Coverage of the General Strike All Day Today
18,637FansLike
0FollowersFollow
67,429FollowersFollow

It Took Some Time

Diana Guerrero-Maciá Mixes It Up