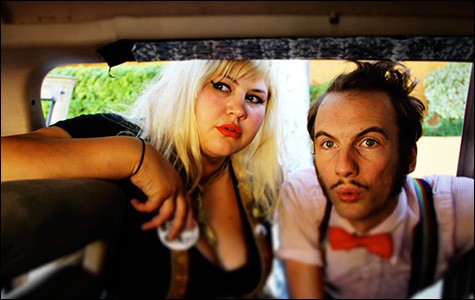 Much of the Boogaloo crowd conformed to a definite visual aesthetic. Three-inch band buttons were legion, pinned to an array of denim, leather, and polka dot garbs. Many devotees traveled from afar, as announced by back-patches bearing Rat Fink-style graphics anchored by city names. On Sunday, the tribe congregated in Mosswood’s concrete amphitheater, bobbing kindly to local acts like Shannon & the Clams and Personal & the Pizzas. Lining the stage, balloons spelled out the phrase “Be My Baby” in anticipation of the evening’s headliner, Ronnie Spector of legendary 1960s girl group The Ronettes.

Spector was a perfect choice to headline because she’s retained grace, grit, and impeccable style throughout most of modern pop music’s history. Clad in purple with a towering hairdo, Spector’s consummate singing eschewed showy histrionics in favor of sustaining a rich, evocative timbre. Her cover of Johnny Thunders’ plaintive solo ballad “You Can’t Put Your Arms Around a Memory” was devastating, and a telling reminder of Spector’s seminal historic role. Co-founder of proto-punk outfit The New York Dolls, Thunders is an icon to the sort of listeners rallying around Burger. Still, as Thunders often admitted, his songwriting was heavily indebted to figures like Spector. Through her deeply emotive rendition of a disciple’s song, Spector reminded the Boogaloo crowd that its scene, heroes, and anthems practically belong to her.