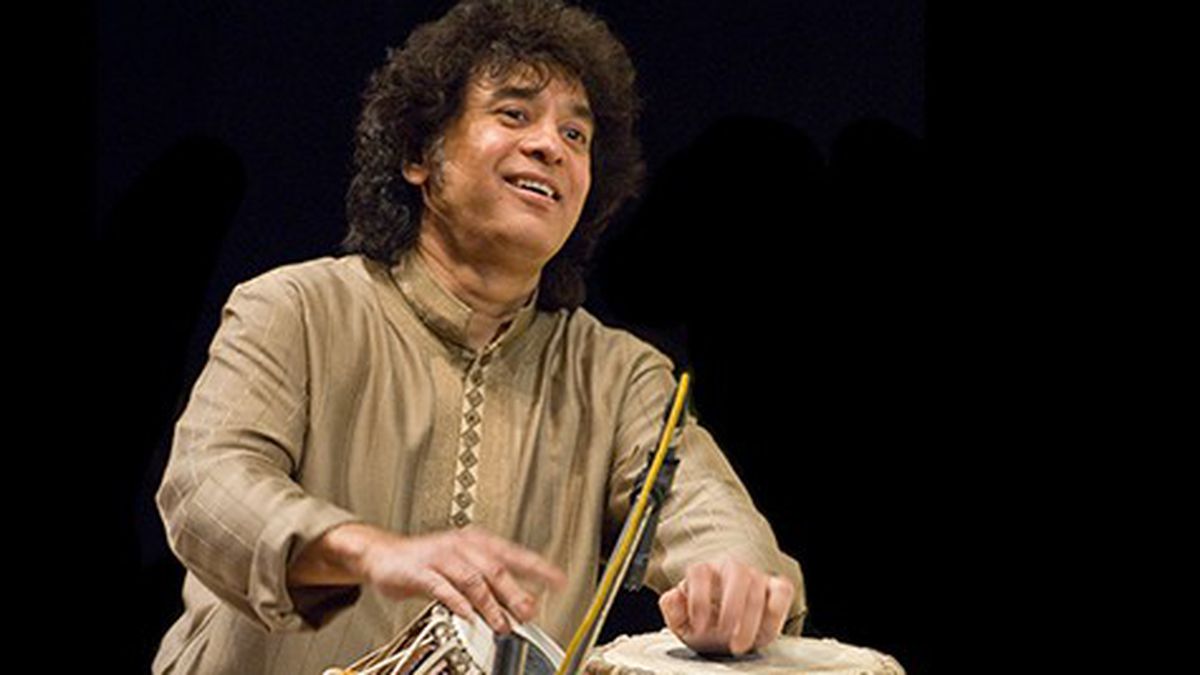 Zakir Hussain searched near and far to put together his Masters of Percussion tour.

Ever since tabla maestro Zakir Hussain started presenting the biennial Masters of Percussion tour in the mid 1990s, he’s scoured India for obscure drumming traditions, looking to showcase the subcontinent’s rhythmic riches. But to find the latest addition to the tour, which Cal Performances will present on Sunday at Zellerbach Hall, Hussain only had to travel a few miles north from his home in San Rafael. In a breakthrough that speaks to trap drummer Steve Smith’s dedication and consummate skill, the longtime Novato resident is the first non-Indian musician to join the Masters of Percussion tour. It’s the latest remarkable evolution for Smith, who started his career on the Boston jazz scene, hit the musicians’ lottery when he joined Journey during the band’s hit-making heyday, and went on to earn renown in jazz circles for his work with Mike Mainieri’s pioneering fusion band Steps Ahead.

“From being a rock and jazz drummer, now I find him to be more of an Indo-jazz drummer,” Hussain, 63, said of Smith. “He’s spent a lot of time studying South and North Indian drumming. Rather than picking up a tabla, he choose to transpose all that information onto his instrument, the American drum set. I’m looking forward to sharing that.”

The son of India’s greatest 20th-century tabla master, Alla Rakha, Hussain is a musical polymath who has composed scores for dozens of Bollywood and Hollywood films and collaborated with a dazzling array of artists, including Yo-Yo Ma, Edgar Meyer, Grateful Dead drummer Mickey Hart, and tenor saxophonist Charles Lloyd. He credits his father, a pioneering North Indian Hindustani artist who sought out collaborations with South Indian Carnatic musicians, with sparking his interest in presenting various Indian rhythmic traditions to international audiences.

“Every tour I keep the core kind of the same, with at least two or three drummers I’ve worked with on a regular basis,” Hussain said. “And then I bring in two or three new ones to give a fresh look at what a master percussionist can be. There are 200 or so percussion instruments in India and 24 percussion traditions, and I’ve spent a lot of time traveling down little dirt roads to find drummers. It’s been a very satisfying experience to go find these guys and then spend months on the road with them, learning their rhythmic thinking and how their music works.”

For the latest edition of Masters of Percussion, Hussain has recruited some longtime comrades, including his wife, noted kathak dancer Antonia Minnecola (“She’s just as much a drummer as a dancer, wearing 150 bells on each ankle, playing rhythms with her feet, and visually painting those rhythms on the stage,” Hussain said), and Remember Shakti’s V. Selvaganesh on the South Indian frame drum, or kanjira, and clay pot, or ghatam. Among the newer members of the tour are Vijay Chavan, who represents the folk traditions of Maharashtra on the small double-sided dholki drum, and Deepak Bhatt on the larger Punjabi double-sided dhol (familiar to many through dance-club iterations of bhangra).

“The sad part is that under the guise of bhangra, DJs took one Punjabi beat and made it into a remix, and it became an underground thing,” Hussain said. “But that took away from what the tradition is, when women sing the welcoming song for the bride, or the spring seeding of the fields. There is a tradition there that has not been explored in the DJ world.”

While this marks Smith’s first Masters of Percussion appearance, he and Hussain share a lot of history. They first played together in the late 1990s as members of Yo Miles!, guitarist Henry Kaiser and trumpeter Wadada Leo Smith’s talent-laden project exploring the early fusion experiments of Miles Davis. They went on to tour and record with Berkeley tenor saxophonist George Brooks’ Summit, “which is where we really connected,” Smith said. “Whenever you play with the Indian musicians they’re always teaching you the different rhythmic compositions. I ended up developing a pretty extensive vocabulary on the drums. Then I started meeting different Indian musicians and people like the guitarist Prasanna started hiring me,” which led to the fantastic 2010 album Raga Bop Trio, a collaboration with Brooks and Prasanna.

Most recently, Smith joined Hussain at the SFJAZZ Center last March for his Rhythm Summit with Puerto Rican conga master Giovanni Hidalgo and trap set star Eric Harland (who plays with Hussain and Charles Lloyd in the celebrated trio Sangam). The encounter is being released as part of a DVD package The SFJAZZ Sessions documenting Hussain’s sold-out four-night run at the center.

“To get the call for this tour was a great thrill,” Smith said. “The most exciting part is that unlike some of the gigs which are one-offs, now we’re all traveling together in a sleeper bus and I think a lot is going to develop during that time. I’m definitely going to be in school those four weeks.”