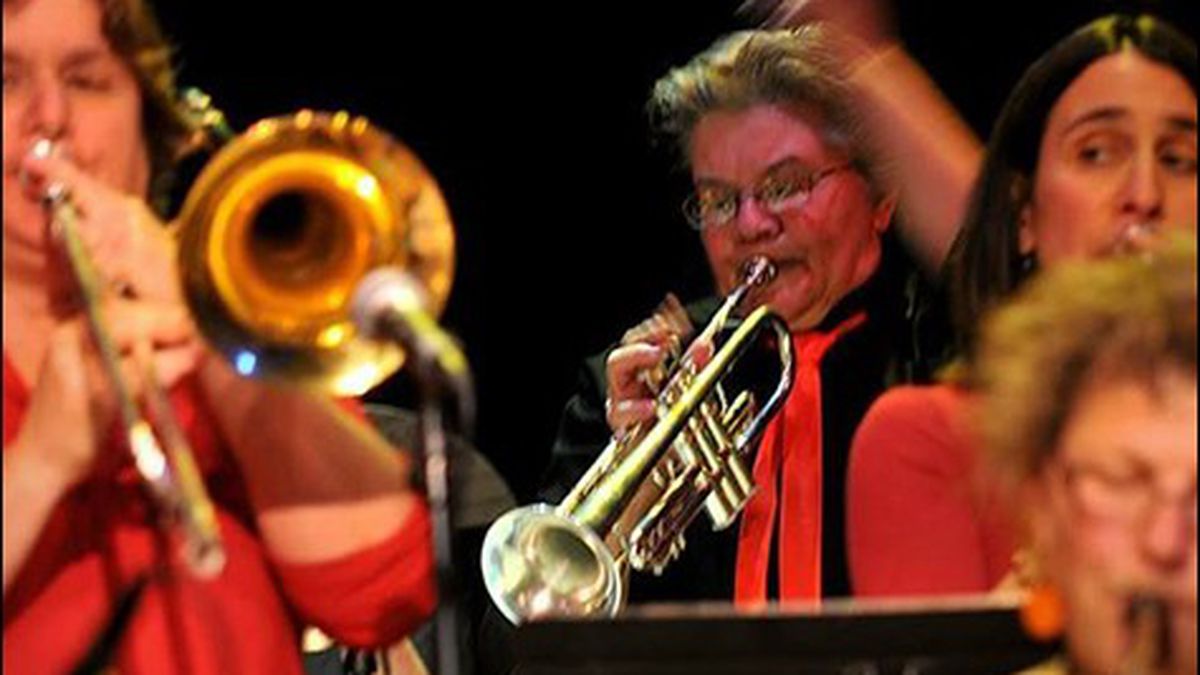 Ellen Seeling began studying jazz in the seventh grade, but it wasn’t until she went to college that she met another female trumpet player. When she enrolled at Indiana University in 1969, she was one of only three female trumpeters in a class of more than one hundred students. After becoming the first woman to graduate from the university’s jazz studies program, Seeling moved to New York City in the 1970s to pursue music. At the time, she knew of only two other professional female jazz trumpet players in the entire city.

“It was clear to me that something was wrong,” said 63-year-old Seeling, who teaches jazz trumpet at UC Berkeley and is a founder of the Montclair Women’s Big Band. “I was lucky to get as much work as I did.”

Decades later, Seeling says little has changed. As evidence, she points to the fact that the Jazz at Lincoln Center Orchestra, which is directed by Wynton Marsalis, has never hired a permanent female instrumentalist since its founding in 1988. On Saturday, March 22 at 5 p.m., Seeling will stage a rally at the SFJAZZ Center, where the Jazz at Lincoln Center Orchestra is scheduled to perform Thursday through Sunday.

“These guys are running the show and they don’t want to give it up. They have a lock on jazz,” she said. “Women cannot get those jobs.”

Seeling believes a simple reform could make a big difference — blind auditions, in which the identities of the candidates are concealed from the judges. “Women spend a ton of money on education, work just as hard as everybody else, and play just as good as everyone else. They should have a shot at those jobs.”

With the exception of singers, jazz music remains heavily male-dominated, said Seeling, who cofounded the Girls’ Jazz and Blues Camp, the first of its kind in the country, in 2009. As the director of a world-famous jazz band, Marsalis could take a noteworthy step in the right direction by hiring female instrumentalists — or at the very least holding fair auditions, she said. “With a lack of role models and not a lot of encouragement in school and nobody in the bands that looks like them … who is going to put up with that?” Seeling said, noting that girls often quit in the face of these barriers.

Seeling added that Marsalis doesn’t even publicize openings for the Jazz at Lincoln Center Orchestra, and instead seems to pick colleagues and friends to join his group, which reinforces gender discrimination. “Wynton holds the ultimate authority in terms of decision-making.”

In the 1970s and ’80s, the implementation of blind auditions in symphony orchestras led to major improvements in gender equity, according to a National Bureau of Economic Research paper published in 1997. In 1970, female musicians in the top five US symphony orchestras made up less than 5 percent of all players. By the late ’90s, they made up 25 percent, the study found. Today, it’s common for orchestras to feature 30 to 40 percent women, Seeling noted. Researchers also found that women were 50 percent more likely to advance beyond the preliminary rounds when audition processes were blind. There have not been parallel advancements in jazz, which makes it very difficult for female instrumentalists to have sustainable careers, Seeling said. Jazz at Lincoln Center offers its orchestra members the rare well-paid and long-term job. The group has featured female vocalists and substitute female instrumentalists, but has never given a full-time orchestra job to a woman.

Seeling also questions whether Jazz at Lincoln Center, a private nonprofit organization, could be in violation of non-discrimination laws. This is especially of concern, she said, considering that the organization receives public money. Records show that the nonprofit, for example, has consistently taken funding from the National Endowment for the Arts — most recently, a $60,000 grant for fiscal year 2014.

Jazz at Lincoln Center did not respond to repeated requests for comment.

Legal experts said that musicians could potentially allege discrimination in court, although one of the challenges would be finding a plaintiff willing to speak out — which could be especially difficult since women generally aren’t given a chance to audition in the first place. Further, “When you have this long history and culture that supports this kind of persistent discrimination and exclusion of women, it’s really hard to find women who are willing to be cannonball fodder,” said Jennifer Reisch, legal director of Equal Rights Advocates, a San Francisco-based civil rights organization. “If you are the one who is challenging this man and this institution … the reputational risk is huge.”

But a plaintiff may have a strong case given that the orchestra has never had a female member, said Sara Sanderson, a philanthropist with the Women Donors Network and an attorney who has discussed the legality of Jazz at Lincoln Center’s hiring practices with Seeling. “You have no employees in a certain category of workers who are women, and you never have. When that occurs, the burden of proof is lessened and it’s going to be much easier for a plaintiff to show discrimination.” Reisch, who is not involved in Seeling’s rally or any legal action against Marsalis, noted that critics could also potentially go after the public entities that fund the orchestra as a way to pressure Marsalis to change his practices.

“It’s a fair employment issue as far as I’m concerned,” said Jean Fineberg, who co-founded the Women’s Jazz and Blues Camp with Seeling and is the assistant director of the Montclair Women’s Big Band. “If you’re a woman musician, you get pretty darn tired of being invisible and have a harder time making a living.”

It’s brave for a musician like Seeling to raise awareness of this issue, said Sarah Cline, jazz director at Berkeley High. “Professional women musicians are afraid to complain. There’s a lot of pressure on us, even if we feel like something is wrong, not to say anything about it.”

Faced with criticisms in the past, Jazz at Lincoln Center has noted its many female employees in other positions: In an interview with The Village Voice in 2000, directors cited the high rate of female staff members in administrative roles. From a legal standpoint, that’s a weak argument, said Reisch. “If someone is applying to a job as a construction worker, you can’t say, we’ve got ladies in the office who answer our phones.” In the Voice article, Marsalis also argued that there is slow turnover in the band and added: “I hire orchestra members on the basis of merit.”