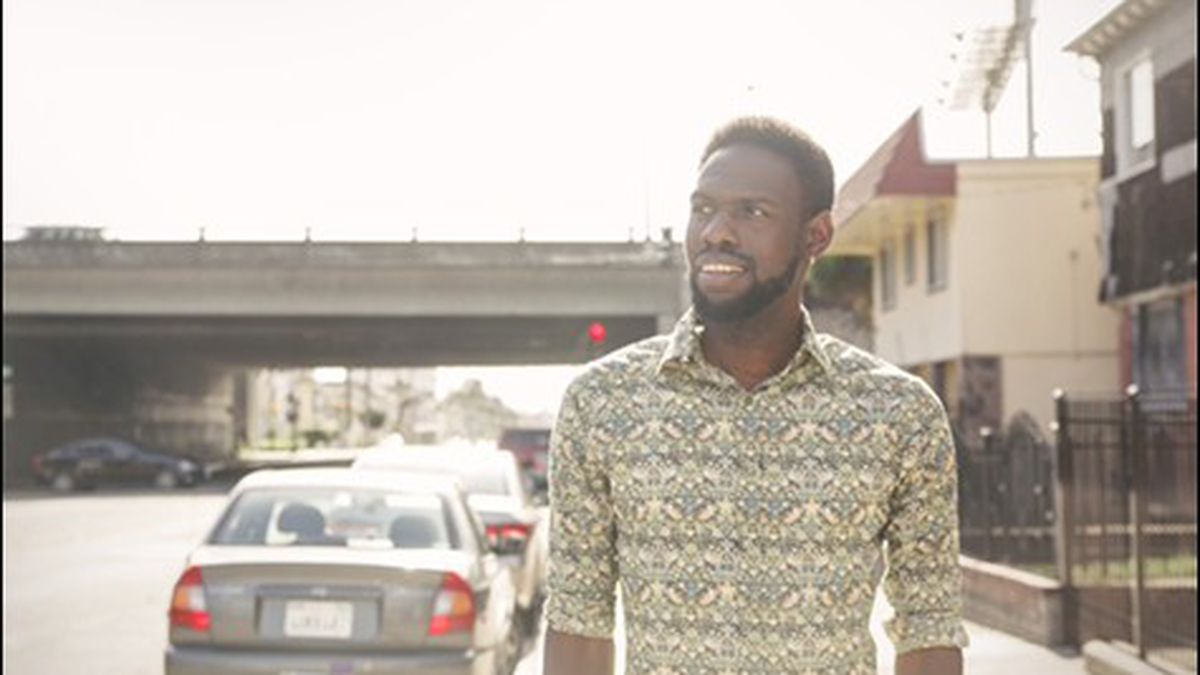 What would the traditional roots music of an African-American Jew sound like? Anthony Mordechai Tzvi Russell is the first to admit it’s a ridiculous question. But for personal reasons, he’s been on a journey to find out.

As an African-American classical singer, for fifteen years, Russell avoided singing Negro spirituals. “They are traditionally part of the African-American classical repertoire; they’re just something you do,” said the Vallejo-raised singer, who now lives in Oakland. “I didn’t want to do them because I didn’t want to be defined by my race as a performer.” It was only by immersing himself in songs of another culture — Yiddish music, which he began learning after he converted to Judaism — that this foreign tongue brought him back to music of his own people.

Russell was living in New York and just beginning to perform as a Yiddish singer when he was asked to participate in a show honoring Martin Luther King Jr. Day. It was a conundrum for Russell, who said yes, and then didn’t know how to approach it. “Just being black wasn’t enough,” he said.

One of his favorite Yiddish songs was “Der Germore Nign” by Avraham Reisen, about a boy studying at yeshiva, away from his family. Russell couldn’t help but notice how similar the theme was to the spiritual “Sometimes I Feel Like a Motherless Child,” so he performed his own take on the Yiddish song at the New York event.

While he received a positive response there, Russell experienced an even stronger reception when he performed the work at the Ashkenaz Music Festival in Toronto — a Jewish festival — which convinced him that his music needed to go in this direction.

Out of this exploration came “Convergence,” Russell’s dialogue between Yiddish music and Negro spirituals. Subtitled “Spirituals from the Shtetl; Davening from the Delta,” the piece will have its West Coast premiere on March 23 in Berkeley as part of the Jewish Music Festival.

“A lot has been written about the relationship between Jewish and African music as far as jazz is concerned, but most of this is pre-jazz,” said Russell. “What I’m looking to do is to create a space where African-American texts and Jewish texts speak to each other, comment on each other, and have a dialogue — or in many cases, say exactly the same thing.

“I knew of no precedent of a Yiddish song organically growing out of a Negro spiritual, but inside my own head — and I hesitate to say this, but in my heart — I felt I didn’t particularly need a precedent,” he continued.

Russell, 34, was raised in a musical, church-going Christian family in Vallejo. At the same time he was taking piano lessons, he taught himself to sing by listening to Handel’s Messiah, singing along with it every day for almost five years.

“I wore it into the ground,” he said. “I didn’t know I was training myself to be a singer. It’s not easy music.”

Voice lessons followed, and soon Russell was singing in choruses, the theater, and the North Bay Opera in Fairfield. In 2007, he sang in the San Francisco Opera’s world premiere of Philip Glass’ “Appomattox.”

He soon moved to New York to further his opera career, having no idea he would fall in love with a rabbi, convert to Judaism, and become fascinated by a language he had never heard before. Yiddish is a combination of German and Hebrew, once widely spoken by Jews of Eastern European descent. While it is still in use today, those most commonly speaking it are ultra-Orthodox Jews, or those learning it in a university setting.

But Russell found deep emotional resonance in Yiddish songs, specifically those sung by Ukrainian-born cantor Sidor Belarsky, who died in 1975. He first heard Belarsky’s work on the soundtrack of the Coen brothers’ film A Serious Man. Russell, who’s a bass, just as Belarsky was, found an online archive full of the pioneering singer’s material.

“It covered the gamut of what I wanted to do as a singer,” Russell said. “It had songs that were rousing and interesting, sad and vulnerable, slow songs, fast songs, ones that were complicated and [ones that were] simple. Practically anything I would want as a singer was right there, and as far as I knew, there wasn’t anyone doing any of it.”

While he began performing in Yiddish in New York, Russell feels that the Bay Area is where he should be. “If you grew up anywhere else in the US, the idea of a gay black guy singing in Yiddish might seem strange. But if you grew up in the Bay Area, bring it. That’s why I love this place — anything can happen here. My Yiddish roots come from New York and it’s where I first made connections, but here you can do what you want to do. Being different is an asset, people are looking for that.”

For “Convergence,” Russell is collaborating with Veretski Pass, a Berkeley-based klezmer ensemble that Russell first met at the Ashkenaz Jewish Music Festival in Toronto. “The first time I heard them, it was in almost an early music fashion,” he said. “A lot of people play klezmer and do the same thing over and over. But they take all of these skills to recreate new things. I look to them as mentors, in that I’m taking things I’ve learned about the Yiddish, Ashkenazi [Eastern European] style of singing and am applying it to something new. They’re ideal collaborators for this project.”

Joshua Horowitz, a founding member of Veretski Pass who is doing the arrangements for “Convergence,” said this composition was clearly personal for Russell. “I see it as a testament of his journey, something that’s really kind of apropos to our time, as people change their identities over their lifetime. Everybody does; it’s just that his is such a great amalgamation of seemingly opposite forces.”

Horowitz said he quickly realized that playing the Yiddish parts as Yiddish and the gospel parts as gospel would make for a rather boring show. “Sometimes we’re contrasting Yiddish with spirituals of some type, and sometimes the spirituals are overlaid with the Yiddish style,” he said. “In my mind as an arranger, it’s about the flow of these cultures and we’re changing them all the time. It’s a very fluid process with a varied and rhythmic language, sometimes using Mississippi Delta blues, which then flows into a Rachmaninoff piano flurry or some gospel church piano. You’d think these things are discordant with each other, but they flow in and out.”

The performance will also feature animation by San Francisco-based visual artist Meredith Leich. Russell met her at a retreat for emerging Jewish artists.