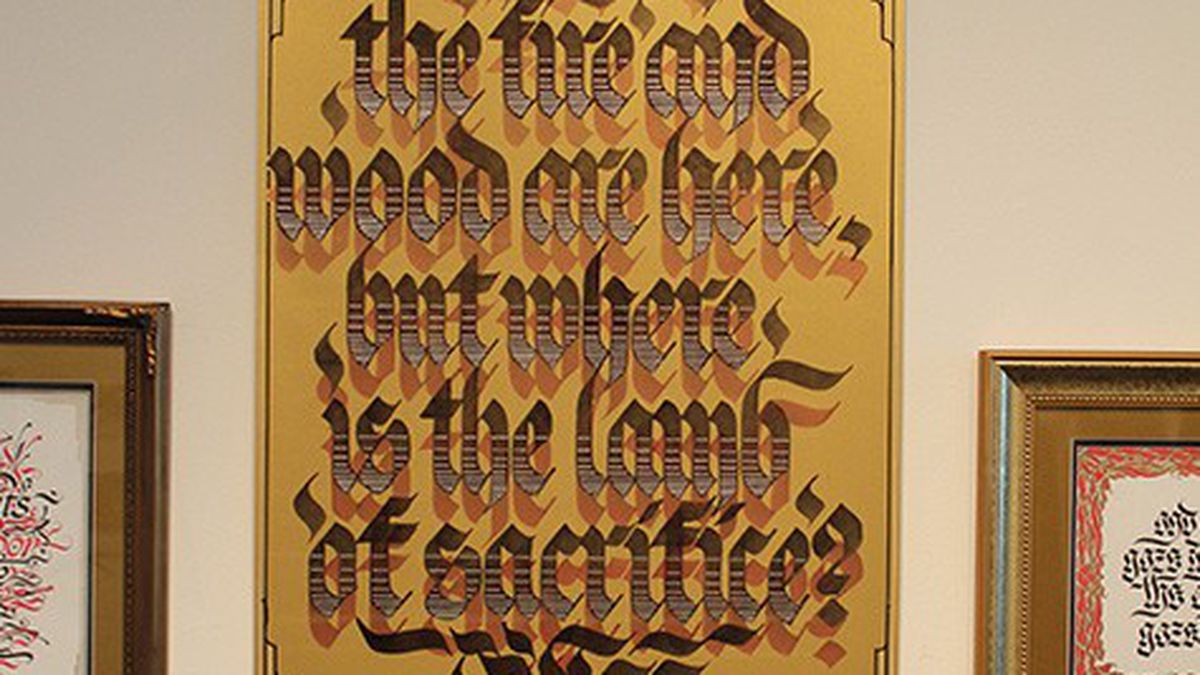 New show at Faultline re-examines the landscape of contemporary calligraphy.

Contemporary calligraphy emerges from a nexus of intersecting influences, calling upon a number of writing traditions while simultaneously challenging the traditional concept of writing altogether. The artistic practice of celebrating script finds its roots in ancient Chinese calligraphy, gothic European script, graffiti, tattoo art, and other writing conventions. “All of these different calligraphic languages that we now have open access to through the Internet come from ancient lineages that we are now just kind of subconsciously and consciously reinterpreting,” said Oakland artist Evan “ESK” Wilson. ESK is the curator of Indelible Marks II: Broader Strokes, at Faultline Artspace (850 42nd Ave., Oakland), which aims to highlight those various lineages by bringing together a group of contemporary calligraphers who each approach writing from a different spot on its web of entangled trajectories. Along with ESK, the show features Bay Area artist Silencer, Atlanta’s Dusty Mauldin, and Santa Cruz’s Jasper Marino.

Mauldin’s work locks down the most legible end of the spectrum. His pieces are often humorous phrases in smooth graffiti-esque script. They have the appeal of clean, slick signage. Silencer’s work in the show is a bit less readable. Reminiscent of embellished gothic calligraphy, his pieces mostly relay philosophical phrases. The archaic style of characters, sometimes silky and at other times angular, appears obviously as writing, but requires careful attention to actually read. One must follow the outline of each character in order to decipher the word, being forced to recognize the letter as both an abstract sign and a code for meaning.

ESK’s script pushes into the realm of abstract expressionism. Although he uses the Roman alphabet, his fluid penmanship is reminiscent of Chinese and Arabic calligraphies. Each character flows into the next, often forming non-linear compositions. For Indelible Marks II, he draped fifty feet of calligraphy-covered paper scrolls from Faultline’s ceiling to foster a visceral, immersive reading experience that transcends the static page. His work is entirely illegible, but he hopes that viewers will have an intuitive reaction that goes beyond language-based communication. “I feel like the intent that you put into the letters can be read even though you can’t read it,” he said.

Of the artists in the show, Marino pushes the concept of calligraphy furthest into the abstract. His broad strokes are recognizably calligraphic, but emphasize the gesture of writing rather than representing contained characters, blurring the distinction between writing and painting. Challenging material conventions even further, the show also includes a number of his ceramic pieces with calligraphic designs carved into them.

As a whole, Indelible Marks II is a snippet of a broader conversation that uses words, but ultimately relays meaning that can’t be articulated through language.