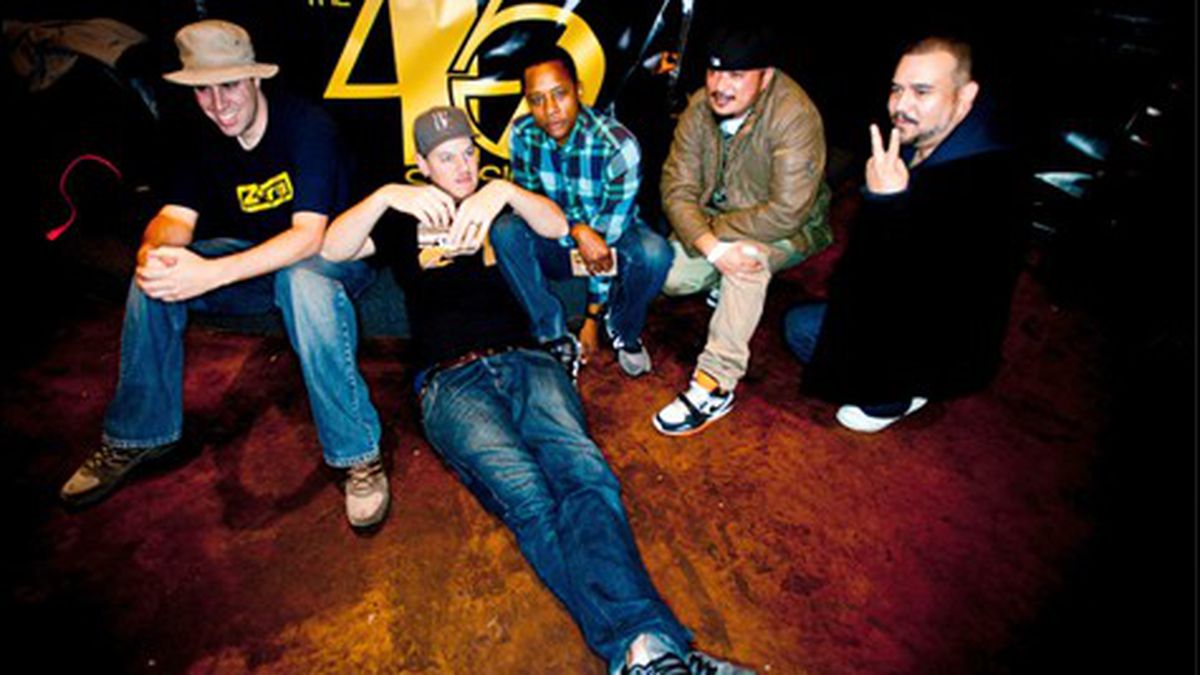 DJ Platurn (né Illugi Luke Thordarson) cuts a striking figure: six-foot-six with tattoos on his arms, piercing blue eyes, and conspicuously bad posture he says is from years of hunching over record players. In the mid-Nineties he stood out even more, mostly because he was known to board AC Transit buses with crates of records in tow. Platurn didn’t have a car at the time, but he took every gig he could get. Building a portfolio is as important in the DJ world as it is in any other industry, and lugging vinyl around was just part of the job. He’d take his records on the 43 bus line (now the 18) up Shattuck Avenue in Berkeley to friends’ houses or the small cafes that didn’t mind taking a chance on a teenage waxslinger. He occasionally had to bring them on airplanes. “Before this digital shit came along,” Platurn said, “I traveled everywhere with wax.”

But the digital shit arrived and Platurn didn’t change his habits too much. He has a car now, and after two decades of DJing he no longer has to accept low-paying cafe gigs. But he still buys records about twice a week. If anything, his taste has gotten even more anachronistic. Now the bulk of his purchases are 7-inch 45rpm vinyl — the kind that gained currency in the Fifties. While the vinyl renaissance has been well documented, 45s still belong to a small niche of hard-core analog fetishists. But that group is growing, too. In 2010 Platurn launched an all-45rpm dance party at The Layover with his friends E da Boss and Enki, two fellow DJs who are also avid record collectors. Recently relocated to Disco Volante, “The 45 Sessions” has become a wildly popular, potentially long-standing monthly affair. It has also turned Platurn into an improbable ambassador for old technology.

But he insists he’s not a Luddite. “It’s not an anti-digital thing at all,” the DJ said, stooping to paw through the discount bins at Amoeba Music in Berkeley. It was a warm Sunday night and the DJ had spent most of his weekend at a wedding gig; he’d arrived to the store in long utility shorts and Adidas sandals, a sunburn flowering on his cheeks. Platurn moved quickly, despite his perennial slump. Within half an hour he’d amassed a thick stack of seven-inches, each of which contained less than fifteen minutes of material (because of their size, these discs typically only fit a few songs at most, meaning they’re either singles or EPs). They represented large swaths of the pop music spectrum: George Michael, Chuck Berry, Michael Jackson, Milli Vanilli, an Irish Celtic rock band he’d never heard of called Horslips.

“And the score of the day,” he said, brandishing a bright-colored record from 1967 — Jefferson Airplane’s “White Rabbit” single. “The original,” he said proudly.

To a real vinyl enthusiast, that could be the equivalent of a Mickey Mantle baseball card — even if it costs three dollars. As of a last year, though, more people have begun to realize the value of vinyl singles. The trend is demonstrable. New data from the Recording Industry Association of America reveals that sales of vinyl singles rose precipitously in 2011, by about 99.6 percent, compared to the year prior. Yet that metric only accounts for new releases and overlooks the sales of used records, so the actual trend might be much more dramatic. “I started noticing it more in the last couple months,” said Rasputin Music general manager Sarah Lopes about the popularity of the seven-inch format. She attributed it both to an uptick in production — bands are embracing vinyl singles because they’re hip and because of their sound quality — and a change in consumer habits. “People are going back to the old mediums,” Lopes said. No matter what your musical tastes, primitive technology has a kind of nostalgic cachet.

Yet despite Platurn’s penchant for vinyl, he still plays about 80 percent of his gigs using a computer. When Serato came out with software that allowed DJs to mix and scratch digital music files, Platurn jumped on the bandwagon just like everybody else — you kind of had to if you wanted to remain competitive in the market. Thus, he isn’t one of those obsessive collectors whose house is so jammed with records that there’s no room for actual furniture. “I’m not a completist,” the DJ said. “I don’t need every single record from a person’s discography.” He looked up from the stacks for a moment, as though chewing on that thought. His face stiffened. “I feel like your relationship with music gets clouded when you’re all about a certain element of the collective process.”

Yet, if Platurn has loosened up his practices as a collector, he has also become increasingly sentimental about music, and about the material upon which it’s distributed. He got into 45s a few years ago, partly for pragmatic reasons — they’re smaller, cheaper, and easier to transport than twelve-inch records, and since all a DJ usually needs is one or two songs off an album anyway, they’re perfectly adequate. As he got immersed in the medium, though, Platurn also saw their aesthetic value. Because there’s more information on 45rpm records than on 33rpm ones, they provide a much thicker wall of sound. “I don’t know all the science behind this shit,” he said, “but I know that when the needle dips into the grooves it grabs more dynamics.”

In that sense, 45s are apropos of a generation that grew up listening to music on high-quality headphones, and whose members have a predilection for rich, full, loud, multi-tracked sound. But they’re also a challenging format for DJs, Platurn said. For one thing, they’re delicate and hard to manipulate — even more so than twelve-inch vinyl. Moreover, the vast majority of them were released during a time when bands recorded songs live, rather than as separate tracks. Thus, it’s harder to fade a record into another one and expect that both of them will have the same clean beat. Platurn pointed out that if you looked at most current pop music on a sound grid, you’d see that most of it follows the same rhythmic arc, which makes it fairly easy for DJs to match beats — these days, you can even use pitch-altering software to make chord changes align as one song fades into another (thanks to a feature called “mixed in key,” which has become a standard part of the average DJ’s toolbox). But 45s don’t work that way.

Since launching The 45 Sessions Platurn has embraced the older format wholeheartedly. He spends several hours a week scouring the bins at local record stores, flea markets, garage sales, and thrift shops. The spoils of these crate-digs are sometimes fantastic (Jefferson Airplane was a coup; Milli Vanilli was a pleasant surprise) and often bizarre. After he’d bought a stack of vinyl singles at Amoeba, Platurn waltzed up the block to Rasputin, where he found a few odder gems. Among them: Experts from ‘The Book of Mormon’ in electrifying yellow vinyl; a twelve-minute Jazzercise program with a woman in a leotard sketched on the album jacket; and, best of all, a record of duck calls — “for mallards, and all other ducks of the puddle class.”

“Like, who’s heard of that?” Platurn asked, pulling the disc out of its jacket to inspect the label. “A fuckin’ duck record.” He smiled cunningly.

Just then, a clerk came on the loudspeaker to warn that the store would close in four minutes. Still smiling, Platurn put the duck record under his arm and marched over to the cash register. If the ducks happened to quack in 4/4 time, he might use it at the next 45 Sessions this Friday.