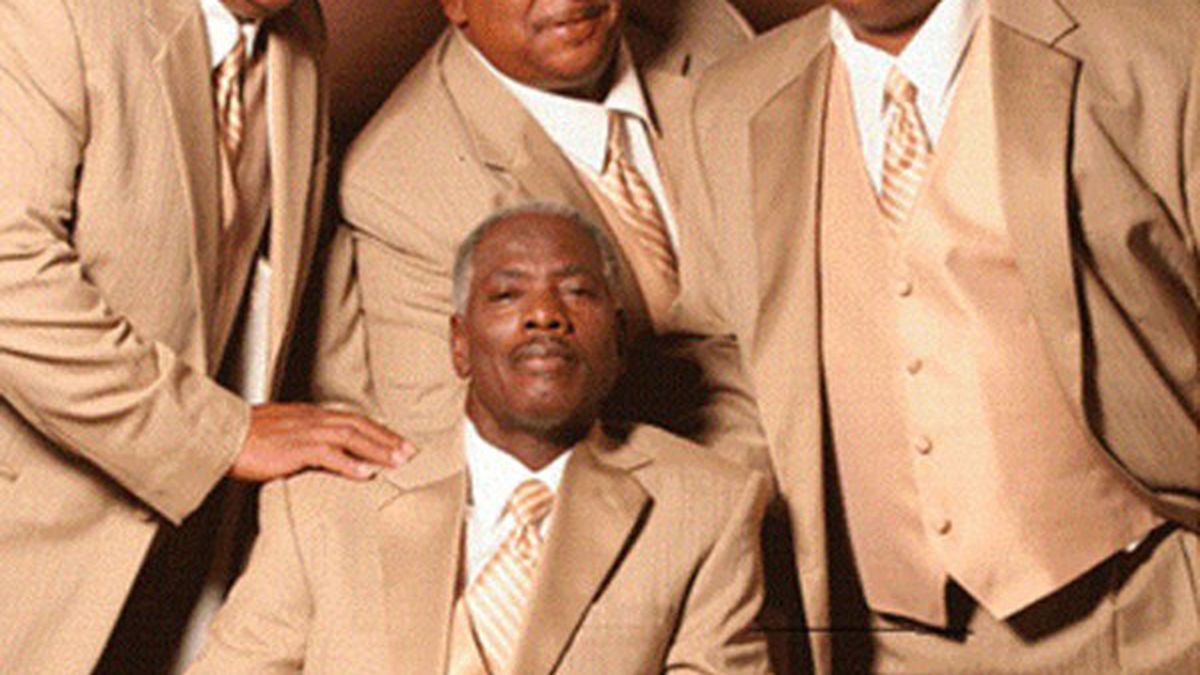 Lee Williams and the Holy Ghost

Leader of the Spiritual QCs takes his audience back to the crossroads.

Lee Williams stood stoically on the pulpit of Oakland’s Parks Chapel AME Church Saturday night, seldom moving his lanky body other than to tap his left foot in time to his band’s hard-driving shout beats, while delivering song after song during his second concert there that day. The 65-year-old gospel music star, leader of Tupelo, Mississippi’s Spiritual QCs (“Qualified Christians”), showed little expression on his face, yet emotion seemed to well up inside him and pour out through his rugged low-tenor pipes. His voice, which was rather weak at the onset of his thirty-minute performance, became increasingly powerful and intense with each number, bringing many of the several hundred fans in attendance to their feet. Some danced in Holy Ghost-inspired ecstasy.

Dressed in a dark-chocolate suit with a burgundy shirt and tie, as were his seven backup vocalists and instrumentalists, Williams at first said nothing between songs, then finally told the audience about one Friday night when he found himself standing at a crossroads in his life.

I promised my Father, he explained, that if You save this little soul of mine, I’ll run and run and run and keep on running. The band punched each “run” as his voice moved from speaking to singing. I can’t give up. I’ve come too far to turn around. I’ve shed too many tears, he wailed, giving emphasis to “shed” with a throaty sustain.

Williams’ career has come quite far in recent years. He worked as a truck driver and sang with the QCs only on weekends with minimal remuneration until a Memphis disc jockey began airing one of their cassette tapes seventeen years back. They are today the hottest group on the African-American gospel quartet circuit, which is rather unprecedented considering that Williams is neither a vocal virtuoso nor a showman. He and the QCs cast a spell with their call-and-response songs, particularly during extended one-chord vamps on which he improvises short, often repetitive phrases. The hypnotic effect on listeners is not unlike that of one-chord North Mississippi trance blues.

Ghent, though second billed to Williams, opened the show because he and his four musicians had to catch a plane in order to be back in Tennessee for church the next morning. He played his small guitar, held horizontally against his stomach and played with a slide, at a lower volume than when he appeared locally with Williams two years ago and was undercut in the mix by a punishingly loud bass drum. Many in the audience, unfamiliar with sacred steel-guitar music, appeared puzzled when he began playing shivering metallic lines over twelve-bar blues chord changes and a slow-shuffling beat that at first appeared better suited to a juke joint dance floor than to a house of worship — that is, until he began singing the lyrics to the Reverend Oris Mays classic “Don’t Let the Devil Ride” in a gruff baritone.

Local singer Murphy proved a welcome surprise during her three-song set, particularly when she used a variety of vocal inflections with consummate subtlety to drive home the message of the church standard “Call Him by His Name.” Tyson, the latest in a line of gospel organ masters that includes Reverend Maceo Woods, Billy Preston, and Twinkie Clark, stunned the audience with a B-3 rendition of “Amazing Grace” filled with clipped notes, swelling sustains, and wispy glissandos.

Yet the night’s real “house-wrecker,” as they call show-stoppers in gospel music world, was Golden Wings lead singer James Earl Parks. Since appearing on a Bay Area bill with Williams two years back, he has downsized by dropping his three high-stepping harmony singers and instead letting his musicians handle the vocal responses to his fervent calls.

Rock me Jesus, he shouted in a raspy low tenor, his body bouncing up and down and swaying from side to side. His musicians repeated the sentence while maintaining an incessant two-beat shout groove. Alton Hollis, who also plays guitar for the QCs, followed with a smoldering B.B. King-inspired solo.

Parks closed his part of the concert with “You’ve Got To Leave It Here,” an original country-flavored, anti-materialistic ode with which he brought the house down by singing, I never seen a hearse pull a U-Haul on its way to church.

Get Creative About Conserving Water