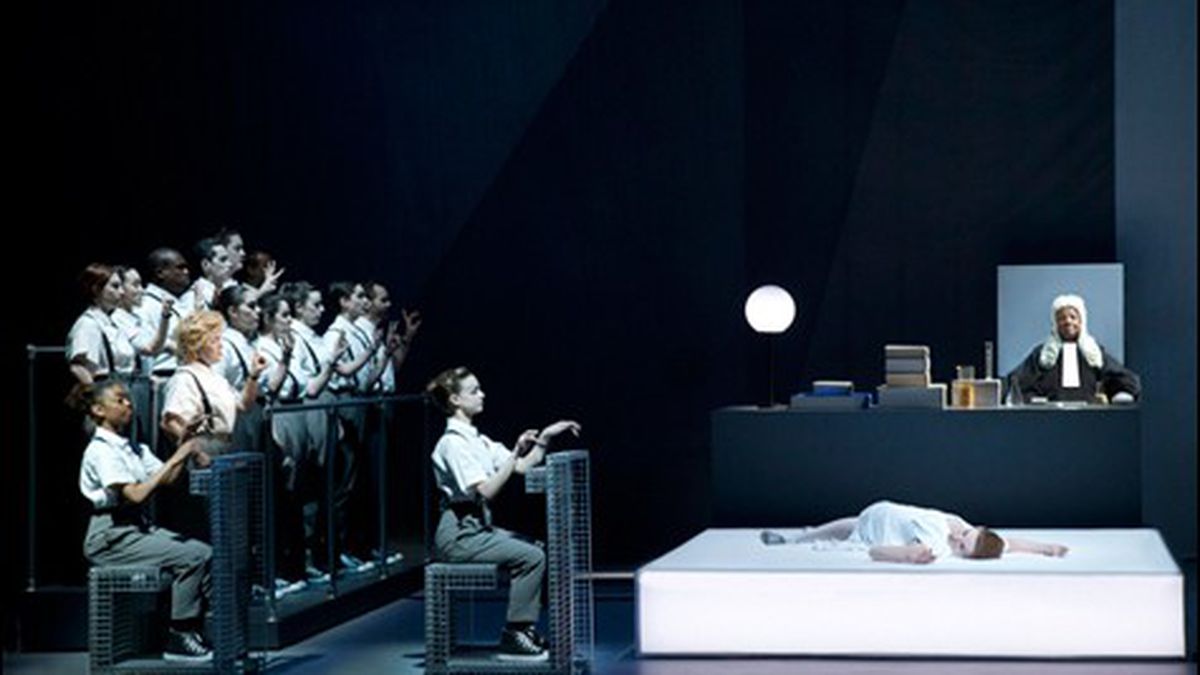 Reviving (and Surviving) ‘Einstein on the Beach’

A meditation on personal myth and the power of withholding.

There is so much myth around Einstein on the Beach — the rarely seen opera with music by composer Philip Glass that was staged this past weekend at UC Berkeley’s Zellerbach Hall — it distracts from the work itself. These myths, passed around on opening night like programs at the door, served to reinforce why we were supposed to spend nearly five hours on a Friday night with an opera that’s not really an opera and not really about Albert Einstein.

“I heard the original production was something like eight hours.”

“It first played at the Met Opera, which left Glass bankrupt.”

“The concept is about relativity. Go ahead and make fun of Robert Wilson, but he is a master.” (Wilson co-wrote Einstein on the Beach, and Glass used his stage-design sketches to compose the score. Conceptual art is an easy — and fair — target for parody: South Park wrote its own version of Einstein for Mr. Hankey in the Christmas Poo episode).

For the aesthete, Cal Performances is the Giants and its staging of Einstein on the Beach is the equivalent of it winning the World Series. Einstein on the Beach is a complex, expensive, and laborious production, and Cal Performances helped fund its first revival in twenty years with the hope of bringing it to Zellerbach. Berkeley got three precious performances last weekend, the only West Coast leg of the revival’s world tour, and its first time staged west of the Hudson, for which tickets immediately sold out when they went on sale late last year. Now the production is off to Mexico City, and this tour may be the last time audiences will see a staging in which its creators, now all in their seventies, were directly involved.

And so it goes when we humans get our hands on something rare, a supposed masterpiece, a thing we are told to treasure: We mythologize, we dissect, we want to know its secret, like its power can somehow transform us by being near it. But here’s the secret about Einstein on the Beach: The experience is not about what it brings to you, but more about what you bring to it. As relevant now as it was when it was staged in 1976, but for different reasons, Einstein on the Beach withholds information, emotion, and explanation from a culture whose immediate needs are constantly being met. It’s only then audience members are forced to look inside themselves for answers.

When he composed Einstein on the Beach in 1975, Glass deconstructed the concept of what an opera could be, likely less as a deliberate act of rule-breaking — there are those myths again — and more to suit his and Wilson’s anti-narrative, non-linear vision. There is a small orchestra (sadly not conducted by Glass in the 2012 revival) with synthesizers, woodwinds, a saxophone, a vocal chorus, and a solo violinist, Bay Area-based Jennifer Koh, who is dressed in full costume, makeup, and wig to resemble Einstein. Koh’s costume is the only overt reference to Einstein in the entire show.

From the moment the first act opens and one of the primary symbols of the opera, a steam locomotive, enters the stage, it feels like waking up from a lucid dream, recalling a detail, and then letting it tumble back into the subconscious. The imagery continues this way for four more hours: Above the train there’s a child standing on a crane, folding and flying paper airplanes into a group of dancing adults who ignore him; the cast is almost equal black artists to white artists (per Wilson’s staging); almost every member of the cast is wearing a wristwatch, and clocks feature heavily in the set; a trial takes place, about what we never know, which morphs into a prison; an industrial factory filled with workers turns into a brilliant white light show in which two players vertically and horizontally shift through it in moving rectangular boxes; a bus driver closes the show with a story about lovers on a park bench.

The music is similar to other Glass compositions — hypnotic rhythms built by repeating the same chord, a dramatic and intricate style he developed after studying non-Western forms such as Indian raga. Later in his career, Glass indulged in more lyrical and romantic orchestral compositions, such as the film score for The Hours, but back when he wrote Einstein on the Beach, his first of many operas, even adding a solo violinist represented a shift away from the tonal sounds of his previously rigid minimalist work. Thankfully, the pipe organ score of Einstein on the Beach, which starts to sound like robots stuck on a broken merry-go-round chanting fragmented dialogue and numbers, contains some relief: the calm duet of “Night Train,” the wailing fifteen-minute saxophone solo in “Building,” the mezzo-soprano aria sung in coordination with a moving bar of light, the vocal chorus in both “Field” dances, and the climatic finale, “Spaceship.”

Einstein on the Beach becomes a test of endurance. There are four acts and the first three are torturous in their assault of repetitive sound, symbols, and motion, combining Glass’ score, Wilson’s sets which transform the stage into a stark, mostly black, white, and gray moving painting, and Lucinda Childs’ frantic, angular, often paralyzed choreography which gives the painting life. A single performance from one of these artists would be overwhelming; three is a headache. And they know it, too, all pushing and pounding at once, so insistent to present something seemingly meaningless that the first hour of the performance comes on like a con.

Taking breaks from Einstein on the Beach is necessary, and detachment and rejection is all part of the experience. The intermissions are free-form and chosen at will by the audience, which is what the artists intended. About an hour and a half in, I had to leave my seat for the back of the theater to pace, stretch, and stand while I watched. In the beginning of the third hour, I went to the cafe upstairs, grumbling to a table of strangers how it’d been a long day with no end in sight, and watched the performance being telecast on one of the two TVs.

Eventually, after your brain stops searching for meaning in Einstein on the Beach, stops wondering how it connects to Einstein’s life, you start to see connections to yourself. The drama — the narrative, if it can be called such — then becomes purely interior, if you’re willing to go there. There is something so deeply American in its themes — man’s creation of the very science and technology that further disconnects him from mankind — but ultimately Einstein on the Beach seeks to tell the best-loved and oldest story in America — the search for self. Perhaps it requires five hours to present its abstract exploration of Einstein because it takes that long to beat us into submission. It’s only then it becomes obvious: The myth here is not about Einstein on the Beach or Einstein the man; the myth is in the mystery, in the personal and individual interpretation of each who experiences it.

Officials Try to Save NUMMI