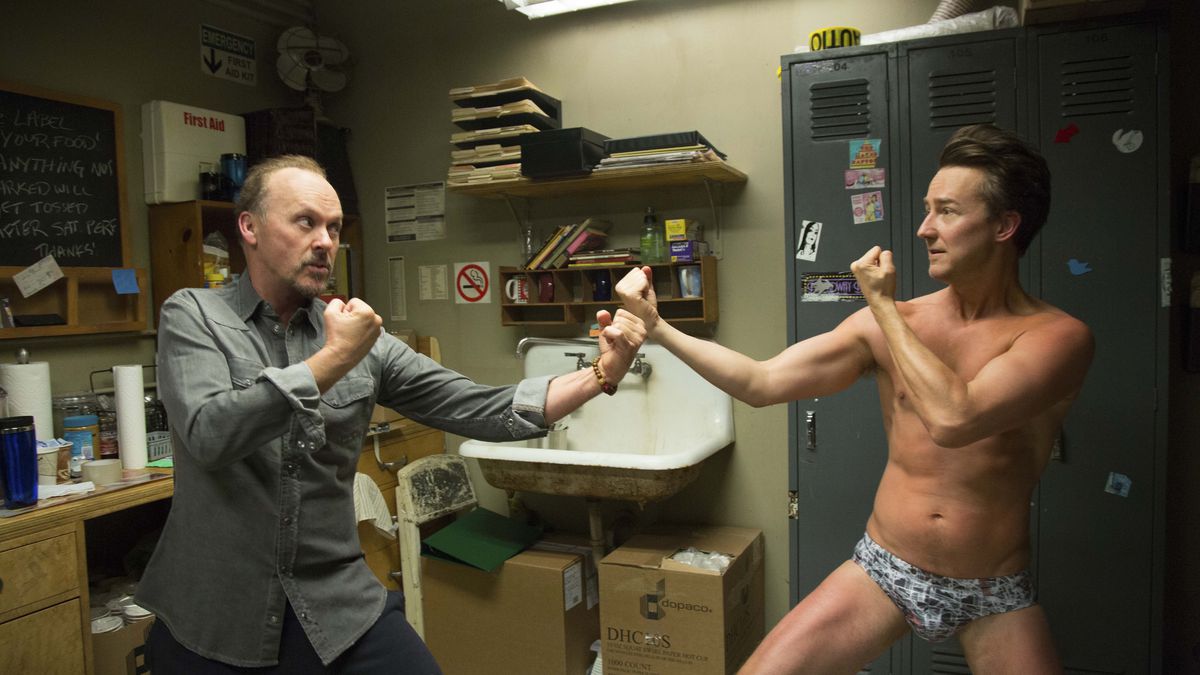 Up in the air with Michael Keaton.

The filmmaking of Alejandro González Iñárritu has always been a tough sell, mostly because of his dubious “hyperlink” dramas — 21 Grams, Biutiful, and the notorious Babel, which wrecked that tedious subgenre beyond all repair. But things can change. Suddenly a shaft of sunlight is shining down on the Mexican international auteur. Birdman, Iñárritu’s fifth released feature since Amores Perros in 2000, is some sort of miracle.

The scenario — concocted by the team of Iñárritu, Nicolás Giacobone, Alexander Dinelaris, and Armando Bo — takes us backstage at a Broadway theater in New York, where an actor-playwright-director named Riggan Thomson (Michael Keaton) is busily lashing together a stage show called What We Talk About When We Talk About Love, his adaptation of short stories by author Raymond Carver. The project has multiple implications for Riggan, who once upon a time was famous for a series of fantasy movies playing a superhero named Birdman. Now his brand has faded and he’s broke, balding, insomniac, drinking heavily à la Carver), and badly in need of a late-career boost. However, inside his head, he hears the voice of Birdman and possesses magical powers. What better time to sprout wings and fly?

Never mind that Keaton’s real-life career trajectory roughly mirrors Riggan’s. The fast-talking, inside-joke-filled screenplay fits the former Batman (Keaton played him twice) like a black leather driving glove. Has-been Riggan has everything invested in his new play and seemingly everything is stacked against him. Between accidents and nervous breakdowns, it’s a new show every night. Of the large cast of actors and hangers-on caught by Iñárritu’s constantly gliding camera, only a couple actually believe in Riggan — his ex-wife Sylvia (Amy Ryan), who drops by occasionally to chide him, and his daughter Sam (Emma Stone), the classic Hollywood spoiled brat, paid to hang around backstage smoking weed and kvetching.

Everyone else is too busy tending to his or her personal agenda to care much about the star’s problems, especially Mike Shiner (Edward Norton), a fill-in actor and Broadway veteran who gleefully script-doctors the play for the harried Riggan. Keaton and Norton’s rapid-fire, semi-antagonistic badinage hits the heights early and lights up the movie. Their bickering encapsulates the ancient enmity between “The Theatah” and Hollywood, plus plenty of old-fashioned upstage-downstage showbiz rivalry. Mike’s drunken barroom lecture to Riggan on the craft of acting is interrupted by a pair of fans asking for a Birdman selfie. When the proles blow past Mike to hug Riggan, the look on the younger actor’s face could melt a glacier.

Each actor in the movie gets at least a chunk of the arch, gossip-drunk dialogue. Zach Galifianakis carves a niche for himself as Jake, the long-suffering producer. Also in the play’s cast are Lesley, Mike’s willing prank victim (Naomi Watts); and Riggan’s hard-luck girlfriend Laura (Andrea Riseborough). Lurking on the periphery like a martini-drinking vulture is drama critic Tabitha Dickinson (Lindsay Duncan, dripping venom), who vows to Riggan, “I’m gonna kill your play,” before she even sees opening night. The operating philosophy is that this Hollywood charlatan is going to be taught a lesson, New York style. Meanwhile, Mike comes on to Sam on the theater rooftop. She reveals she’s not as shallow as she behaves. Stone shows us depths here that were only hinted at in her previous outings. For all the frantic camerawork, the scenario confines itself to the tight space of the theater and its surrounding block. We can’t imagine anywhere else it needs to go.

Keaton’s eternal antsy-ness is on magnificent display. Riggan’s interior monologues; his on- and off-stage rants; the walk through Times Square in his underwear, waving a wig at tourists; his endless Twitter jokes (every character in the film despises social media, even as they constantly keep tabs on themselves); the sweep of Antonio Sanchez’s orchestral score as Birdman wings it over Manhattan — all exhilarating and grandly funny.

Gratifyingly, director Iñárritu himself seems to be having fun. What a relief it must have been to wind up Keaton, Norton, Stone, and rest of the actors in a bitchy, high-spirited showbiz satire, instead of traipsing through another doom-laden, hyperlink guilt-fest. The director had talented actors working for him in those movies, but Birdman is different. Despite its minor faults, it’s an urbane picnic of histrionics and deadpan laughs. Maybe Iñárritu should team up with this gang of screenwriters again.