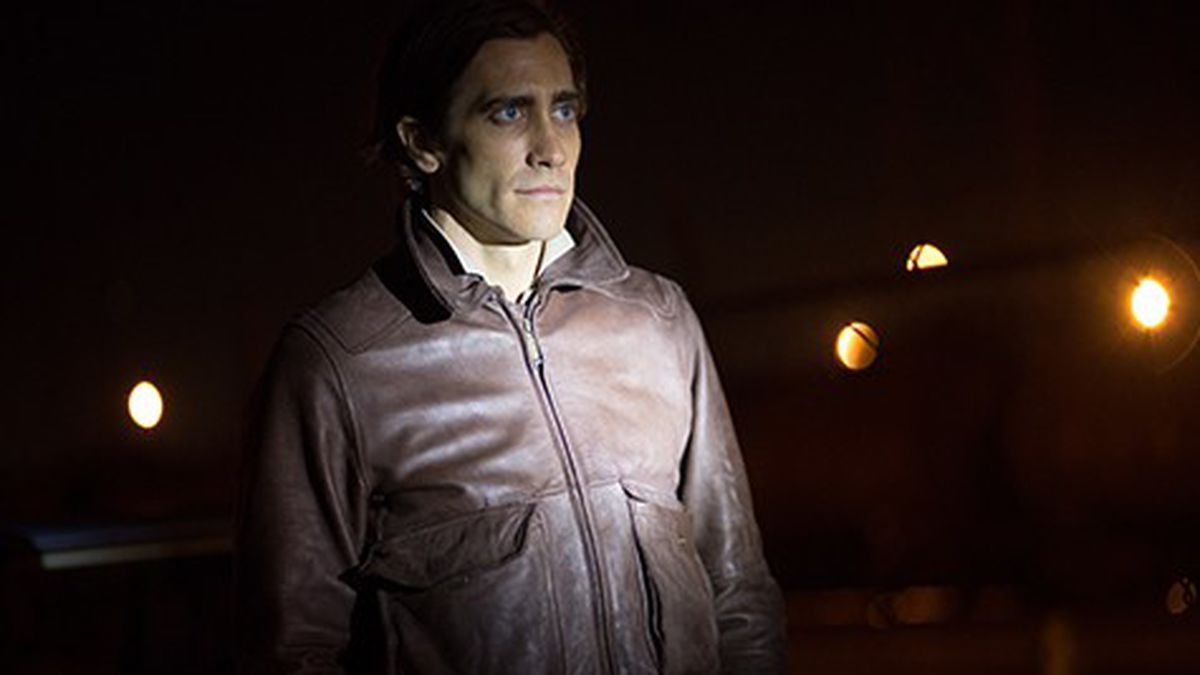 Anyone could tell Lou Bloom (Jake Gyllenhaal), the focal point of Nightcrawler, is stone crazy after spending thirty seconds with him. It’s in his eyes, and in the staccato, wired vocal delivery that reminds us of a shock radio jock in the early a.m. slot. If we hadn’t already seen the ubiquitous TV commercial spots for the film, we would certainly know something’s wrong in the opening minutes of the movie, after filmmaker Dan Gilroy’s dazzling hi-def nighttime montage of Los Angeles scenes wear off and we’re left alone with our boy.

Lou is trespassing on a deserted railroad yard when we first meet him, looking to steal copper, wire fencing, manhole covers, etc. Soon, he discovers it’s easier and more profitable to sell video footage of traffic accidents to TV broadcasters, and so begins a tenuous but long-running relationship — according to his fly-by-night standards — with Nina (Rene Russo), news director of KWLA, the city’s lowest-rated station. Their friendship is a little peculiar, as is Lou’s working partnership with his scatterbrained assistant Rick (Riz Ahmed), the classic dim-witted fall guy accomplice to a string of felonies.

First-time director Gilroy, screenwriter of The Bourne Legacy, keeps a number of hot-topic burners going as we follow Lou’s opportunistic career. Evidently, the move from scrap-metal thief to crash-and-crime video ghoul is as natural for Lou as the decision to upgrade his equipment and adopt a “managerial voice” with his flunky. Crime sells on TV. Ambitious Nina recognizes Lou’s footage as sensational and is willing to pay handsomely for it. If it bleeds, it leads, but Lou is unwilling to settle for merely chasing police scanner squawks in his search for ever more lurid images. Nothing stands in his way, not even rival video hound Joe Loder (Bill Paxton), who mocks Lou’s crummy camera at first but marvels at his Weegee-like talent for capturing the jugular shot. He may speak like a robot but he has the eye.

Lou’s standard line is that he never had much schooling but picked up things on the internet — concepts such as branding and market share. Is he a raging capitalist or a psycho criminal? Rearranging bodies at a fatality accident scene for a better shot comes far too easily to him. Nina shares some of Lou’s stop-at-nothing drive, but from a slightly older, more world-weary perspective. Ethics? She’s heard of that. But most of all she admires his news instinct.

We’ve seen thrill-peddling characters similar to Lou, Nina, Rick, and Joe in numerous Southern California crime-in-the-sunshine films. What Gilroy brings to the discussion is the 21st-century obsession with instantaneous voyeuristic gratification. The point of view is endlessly topical. Nina craves images of urban crime creeping into the suburbs — it’s what’s selling now. Lou essentially wants his own production company and a fleet of vans. In both instances, LA can provide.

The action scenes have a snap, crackle, and pop to compare with any modern urban thriller, but with a vital cooled-out, realistic touch. At its core, despite the grisly trimmings and Gyllenhaal’s unhinged performance, Nightcrawler is coldly analytical and dry as a bone. Says Nina: “I think Lou is inspiring us to reach a little higher.” One day, if your luck fails, he might even be your boss.