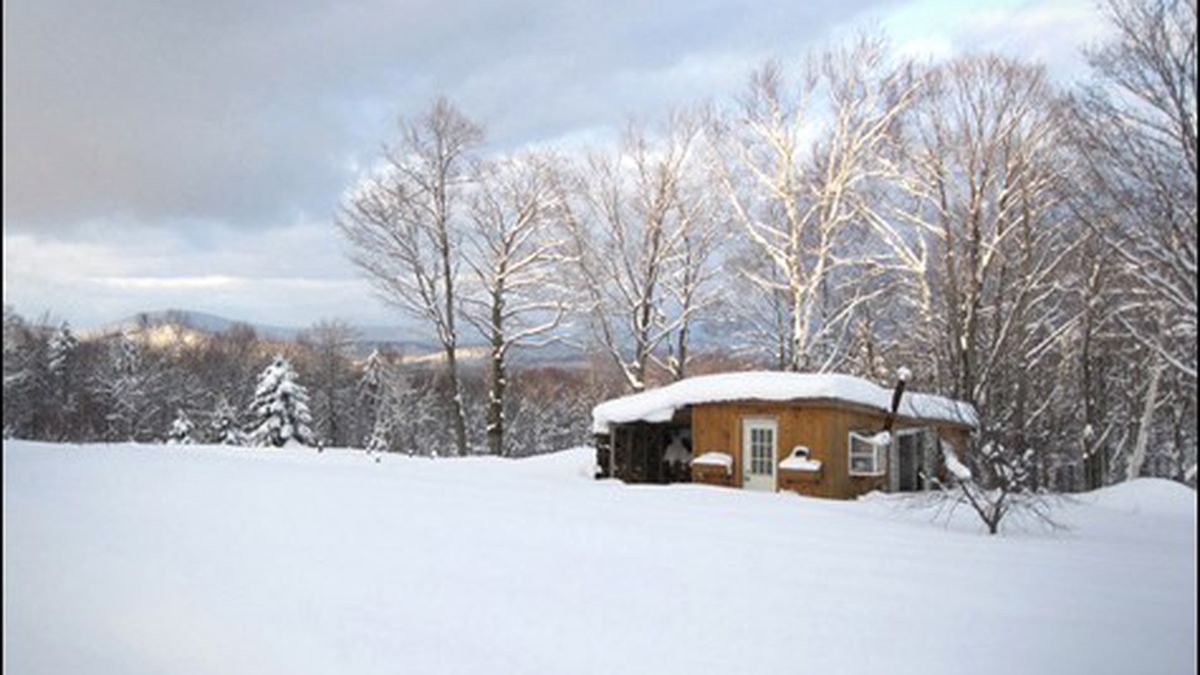 After the dissolution of his longtime band The Books, the veteran musician goes it alone.

Nick Zammuto lives on a mountain, in Vermont, with his adorable young family, in a house he built with his own two hands. Rock ‘n’ roll.

When he answered my phone call on a Monday morning, he immediately announced “I’m screen-printing! Can I put you on speakerphone so my ink doesn’t dry out?” He sounded happy to talk, but determined not to let our interview derail his art project.

He was making special LP covers to support his upcoming tour opening for Explosions in the Sky. “I figured, instead of doing a Kickstarter-type thing, I’d just do this. For the people who are willing to buy an LP for $30, at least they get something we made with our own hands.” The five hundred special-edition record sleeves will help pay for this first national tour under his own name.

Zammuto and labelmates Explosions in the Sky have known of each others’ work for years, but, until recently, Zammuto had gone under another moniker, as one half of experimental duo The Books. The duo members carved out a reputation as electro-orchestral loop-machine fiends, keeping up their (meager) finances by touring. After a nearly ten-year run, The Books finally crumbled late last year, with the musicians parting ways after releasing 2010’s triumphant but perhaps should-have-seen-it-coming-tinged album The Way Out. In some ways, Zammuto is now starting back at square one; in others, he’s way ahead of where he began. Luckily, he likes screen-printing.

“I went to school for the visual arts before I got into music at all, so it’s actually a nice return — usually after the boys are in bed my wife and I like to stay up and screen-print anyway. So we love to do it, and people respond to it. If they know it’s coming from us rather than some machine, then the actual physical object is worth more to them.” Our conversation is colored by the background chatter of his children, an undeniably integral part of his musical life (he samples their voices) as well as his home life. Indeed, Zammuto and his wife stumbled into a lifestyle that’s fortuitously sustainable for a musician.

One of the keys was their move to Vermont, which put his entire family’s health-care costs at virtually nothing: “Vermont is basically Canada — it’s amazing here. It doesn’t matter how much I make, [my kids] are just covered, no questions asked, until they’re eighteen. And for my wife and myself, if I make below a certain amount a year, I think we’re paying like $10 a month for health insurance. We just lucked out; it’s not why we moved across the border, but I don’t know how we could have ever made it work in Massachusetts.

“We try to live as self-sufficiently as possible,” Zammuto said of his humble sixteen-acre estate. “We grow most of our food up here, and there’s a lot of blueberries around and stuff.”

And with each new child, they’ve added onto their house as needed. An old shed became Zammuto’s personal studio. “It’s pretty ironic,” he laughed. “It’s not lost on me that living up on the top of a mountain and making electronic music in an old tractor garage is kind of an odd thing to do. Winters are long, but it feels awesome to be up here. And it’s actually the most productive place I’ve ever been, musically.”

As his own CEO rather than a partner in The Books, Zammuto made quick moves to get back on the road, where the real money is. Though he admits he’ll lose nearly $15,000 this first tour (a loss which his label Temporary Residence graciously subsidized), he’s keeping it efficient. That means limiting days off. “It’s that idle time on the road that always leads to ambivalence and mischief of one kind or another.”

Zammuto also worked out a profit-sharing deal so that members of his band have vested interest in the tour: “Basically, I pay them either a flat rate or a percentage of the ticket sales, whichever’s higher. It’s a good way to start because the flat rate is affordable, and when [ticket sales] are good, it’s really good for the band, like, much better than their standard gigs.”

In his Vermont hideaway, Zammuto also puts his technical skills to work mastering other artists’ albums on the side, which he’s found is coincidentally a great way to connect with his fans. “I just do it so I can buy gear here and there,” he admonished. I actually just mastered a record from this band called Twigs and Yarn, and man, it really blew me away. It’s a lot of fun. Mastering is a whole different thing from making a record, it’s a whole different set of gears, and you learn lots of new things that you want to try out on your own stuff.” For the record, he’s not expensive, either.