With chef Kim Alter at the helm, the pioneering Uptown Oakland restaurant marks a return to relevance. 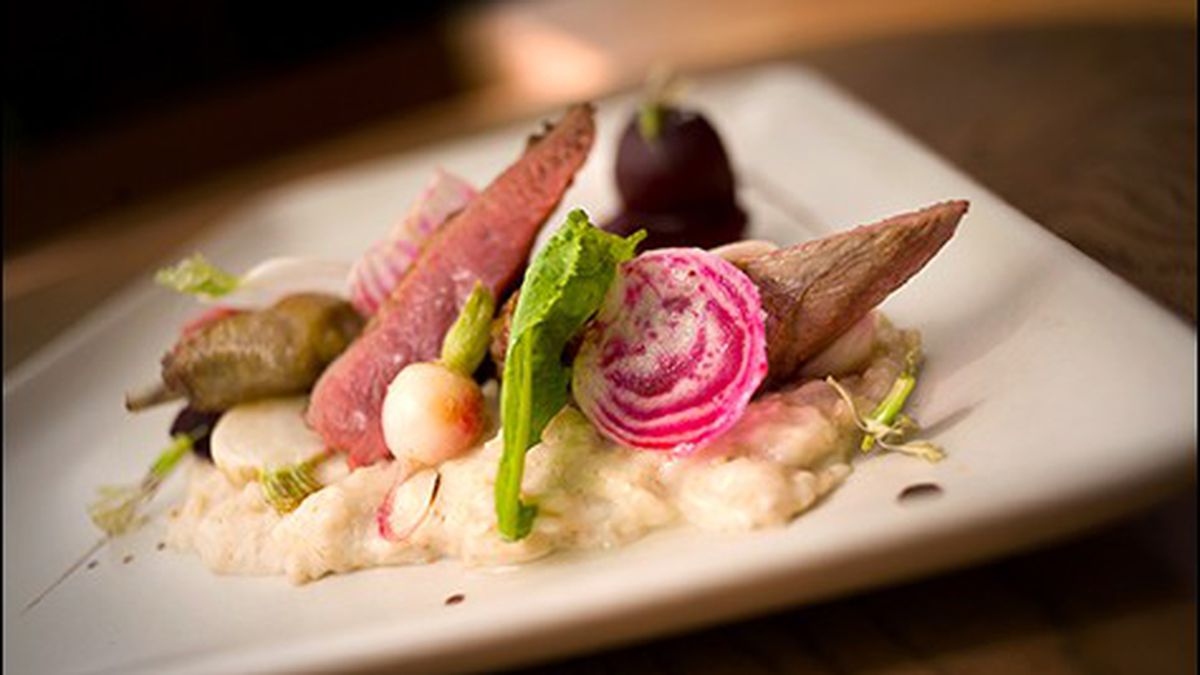 When Kim Alter took over the kitchen at Plum earlier this year, she became the sixth chef — seventh, if you count its earliest pop-up days — to helm the Daniel Patterson-owned restaurant since it opened less than four years ago. Many of the personnel changes occurred suddenly and with a certain amount of drama. For a Bay Area restaurant with such a stellar reputation — and one that’s been closely tied to Oakland’s rise as a world-class food city — Plum has seen more than its fair share of upheaval.

As a result, the restaurant has been hard to peg. I have eaten many inspired, satisfying dishes at Plum, and I’ve also listened to friends complain about how they dropped $80 on dinner for two and went home hungry. I once declared Plum’s brunch program to be the best in town only to hear, a few weeks later, that the restaurant no longer served brunch. In 2010, I thought Plum was the best new restaurant in the entire East Bay. But there have been three or four chef changes since my last visit, and, frankly, I wasn’t sure whether I should even still recommend the place.

Now I know I can. By moving Alter — who made a name for herself at Patterson’s other Oakland restaurant, Haven — over to Plum, Patterson has brought some much-needed stability to the proceedings. And Alter is cooking as well and as confidently as she ever has, serving seasonal California cuisine that’s modern and slightly edgy while still managing to satisfy basic comfort-food cravings.

Look: This will never be a restaurant that pleases everyone. The sleek, dimly lit dining room doesn’t have the warmest ambience or the most comfortable chairs. While the menu has moved away from the taxonomic categories of its early days (“animal,” “vegetable,” etc.) toward a traditional appetizer-entrée structure — and, not coincidentally, larger portion sizes — it tends toward a kind of minimalism that some might find off-putting: just a string of ingredients, often listed by scientific classification (alliums, brassicas) instead of their common names (onions, broccoli). If you’re looking for a fun atmosphere and lower prices, go to Plum Bar next door. Plum’s appeal lies strictly in the quality of the food itself — bold, balanced flavors; pinpoint execution; and, for what is still a surprisingly casual restaurant, a real ambitiousness in terms of cooking technique.

Take the dish that Alter dubbed “Ox Pho.” While there were certainly dozens of steps involved in making it, the final product didn’t feel fussy at all: seared oxtail terrines (crisp-edged, tender, and unctuous); pickled shiitakes, which helped cut into the richness; and an intense mushroom-and-beef concoction that was so concentrated it was more sauce than broth. My only quibble: It wasn’t anything like a pho, and a few thin strands of pea shoot, while pretty, made a poor stand-in for noodles.

A crab salad, served with grapefruit segments and thin bagel-chip-like croutons, was a gorgeous kaleidoscope of colors that would have been right at home at Chez Panisse, but for the smoked aioli on the plate, which added a haunting layer of flavor. A bowl of miso gnocchi ($13) would be a worthy subject for a still life, with edible flowers, green garlic, and cloud-like puffs of fresh ricotta. The sauce was pure comfort — mostly butter as far as I could tell, but once in a while there’d be a surprising little burst of flavor: the mouth-puckering punch of a Meyer lemon or the umami of a Chinese fermented black bean.

My favorite entrée was elevated peasant food at its finest: lamb served two ways (as a roasted leg and a seared terrine) over a scoop of creamy smoked grits, along with juicy, meaty trumpet mushrooms and a chimichurri-like leek vinaigrette.

Dish after dish was like that lamb: labor-intensive and gorgeously plated, always featuring some unexpected ingredient or unusual technique. The food was “fancy” without feeling soulless in the way that modern cuisine sometimes can. In that sense, the dark-crusted, pillowy Parker House rolls that Alter brought over from Haven are as representative of her cuisine as anything else. You don’t have to be a food geek to appreciate them.

Since Alter took over, Plum has started offering what’s probably the most casual tasting menu in the East Bay: five courses, none of which are available on the à la carte menu, for $75 (plus $45 for the optional beverage pairing). You can walk in most nights (or make a same-day reservation), get a spot at a two-top or the chef’s counter, and finish the entire tasting-menu meal in a little more than an hour.

There aren’t enough column-inches here to take you through a blow-by-blow — from the amuse-bouche of pickled kohlrabi, radish, and puréed celery root to a play on “grasshopper pie” that featured sundry forms of mint and chocolate. In any case, by the time this review is published, the entire menu at Plum, including the tasting menu, will likely have changed. I’ll just note that the two meat courses were my favorites. Squab (aka pigeon) was cooked in two equally delicious ways: the tiny breast roasted to a perfect medium-rare (gamier and more liver-y than the most flavorful duck breast); the dainty leg cooked confit-style, until rich, delicate meat barely clung to the bone. And a slow-roasted, intensely beef-y wagyu-style bavette steak, served with a beef-tendon chicharron, crispy smashed potatoes, and assorted “brassicas,” was likely the best play on beef-and-broccoli I’ve ever eaten.

The name of the restaurant is a reference to the central image of William Carlos Williams’ “This Is Just to Say,” a poem about unapologetic hedonism that’s couched in the form of an apology. Plum, the restaurant, has always been a place that’s embodied those kinds of contradictions — between cerebral dining and comfort food, between a chef’s ambitions and the public’s desires. What’s clear is this: With Alter now hitting her groove, Plum suddenly feels as relevant and as exciting as it did when it first opened.