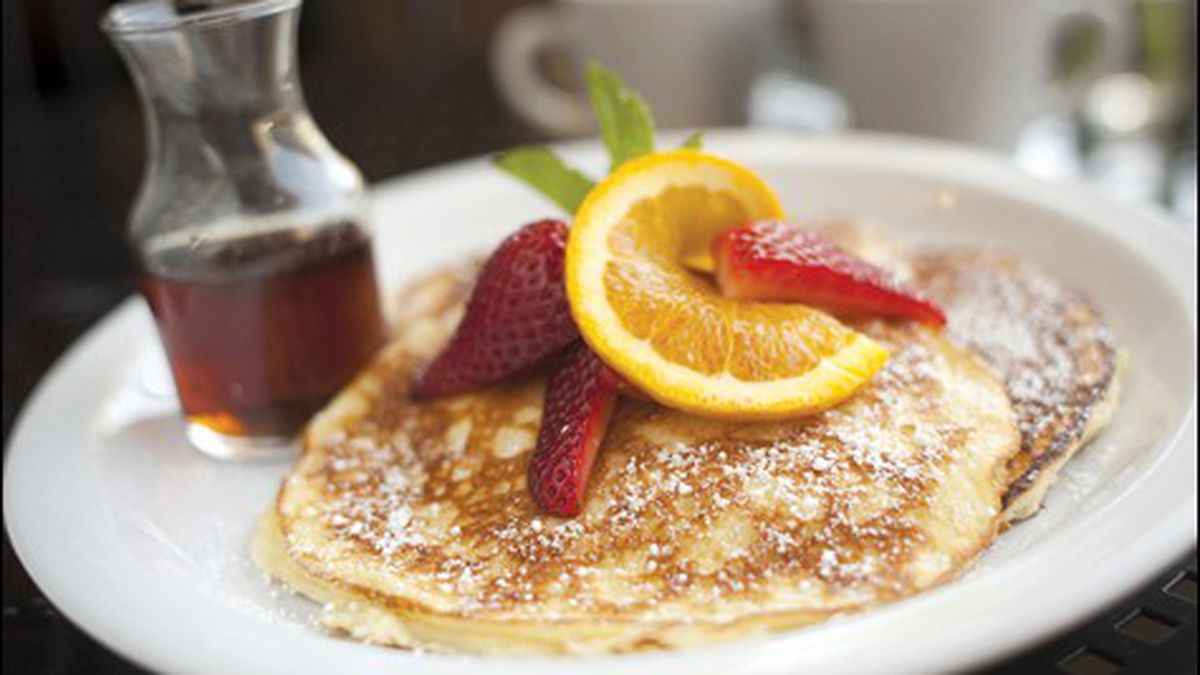 Everyone raves about the lemon-ricotta pancakes at Café Aquarius. And when everyone raves about something — a CD, a deity, a dish — that you have yet to try for yourself, you either believe it or not. Believe it and you’re giddy with anticipation. Don’t, and your jaw locks in determination never to be fooled, even about a pancake.

Served on sturdy white plates that contrast their brightness and float-away lightness, Café Aquarius’ famed pancakes effect that dappled, dimpled look — that lacy tracery of griddle-gilded brown — that distinguishes artisanal pancakes from monochrome tan Bisquick discs. Strawberry slices form a little hat. Knives and forks don’t so much cut the pancakes as suggest that they part — and they do, to vanish upon the tongue like whispers, leaving behind a citrus snap and that barely-cheese ricotta tang. On the plate waits a tiny white syrup jug. One heavenly flapjack down, you realize you’ve forgotten to use it.

Texture is paramount for owner Patrick Feehan, who opened the place in 2007 after many years spent learning the pastry trade. Initially at Grace Baking in Oakland’s Market Hall, whose unheated kitchen with its unilluminated oven he calls “bakery boot camp,” and later at high-end supermarket chain Draeger’s and San Francisco’s Ultimate Cookie, Inc., Feehan came to learn: “It’s really all about technique. With baked goods, flavor is the easy part. Texture is the hard part. You could have a nice buttery-tasting croissant, but if it’s not prepared with the right temperature control over exactly the right amount of time — some things you can’t push — you’ll never have a truly fine result.”

He carried this philosophy into all foods when he decided to launch his own restaurant. A nationwide search for an executive chef led him to Marianne Zdobysz, whose past gigs include Seattle’s Boca, Blowfish, and Madison Park Cafe; Zdobysz traveled to Argentina to master the wood-fired parrilla before opening her own Seattle restaurant, the Buenos Aires Grill. (The lemon-ricotta pancake recipe is hers.) Feehan chose Emeryville because “I didn’t want to come into an established neighborhood where there would be a lot of competition,” he said. “I wanted a neighborhood with lots of potential.” In 2007, “Emeryville was a very interesting macro-economic test tube with lots of new companies and construction and new condos selling at the top of the market.” That was then. A few thousand layoffs later, Emeryville is more like the village that got left behind when the highway was rerouted.

Nonetheless, Café Aquarius was packed when four of us arrived for brunch. Occupied by the historic Rodoni’s 6500 Club from the 1950s to 2002, its totally redesigned, low-slung space now looks like the outdoors, indoors — with pebble floors, black metal garden furniture, and faux ivy festooning brick walls. (In a sense, it’s always daytime here, as the cafe is open only for breakfast, brunch, and lunch.) Two flatscreen TVs aired sporting programs. Pastries beckoned from a case near the door. The ambience was lively, friendly, casual, and warm as we sat down. It remained lively, friendly, casual, and warm while the server forgot to give us menus — and when a second server arrived to take our orders. It was still lively, friendly, casual, and warm half an hour later when the food finally arrived. The second server was exquisitely attentive and apologetic over the delay. Service is not always slow here — but, during peak times, beware.

Tammy declared her sunny-side-up eggs perfectly done, the Niman Ranch pastrami in her “Hollis hash” piquant and just this side of too-salty. Feehan’s objective is not merely comfort food, but the handcrafted, creative neo-comfort food that’s been making a comeback in hip venues with pedigreed chefs. It permeates Café Aquarius’ seasonally shifting menus in such items as custard-dipped French toast, 3/8-pound burgers, four-cheese mac-and-cheese, personal pizzas, blackened-tilapia sandwiches, and grilled steak with mushrooms and bleu cheese.

This comfort-food sensibility infused the savory sautéed potatoes that accompanied our brunch dishes. It informed the hot-pocket style in which Tuffy’s shiitake-Gruyére omelet was served sealed around the edges, its East-West-fusion filling spilling out like a gift with each stab of the fork. It inspired the addictive sweet-potato hash, an impressionist color-and-flavor mélange spiked with red pepper and caramelized onion. Pure California comfort food was the smooth, tangy Hollandaise sauce cloaking Marc’s eggs Benedict — although his dish, with its very-crisp bacon, arrived at an undesirable room temperature. A masterfully frothy Palio-coffee latte raised his spirits.

Few terms fly lower on the radar than “biscuits and gravy.” Yet in Zdobysz’ hands, this country fare becomes a sausage-studded entity, abundant and restorative and bone-jarringly good. Eat this, and you could mine coal or set sail around the world.

And that’s an Emeryville kind of bliss: a bit industrial and a bit high-tech, a hub of hopes and dreams adrift in history. “The neighborhood is still young and finding its way. Eventually, it could be a destination area” — like Berkeley’s Fourth Street, Feehan mused. “In the early days, Bette’s had to build its name in spite of its neighborhood.”