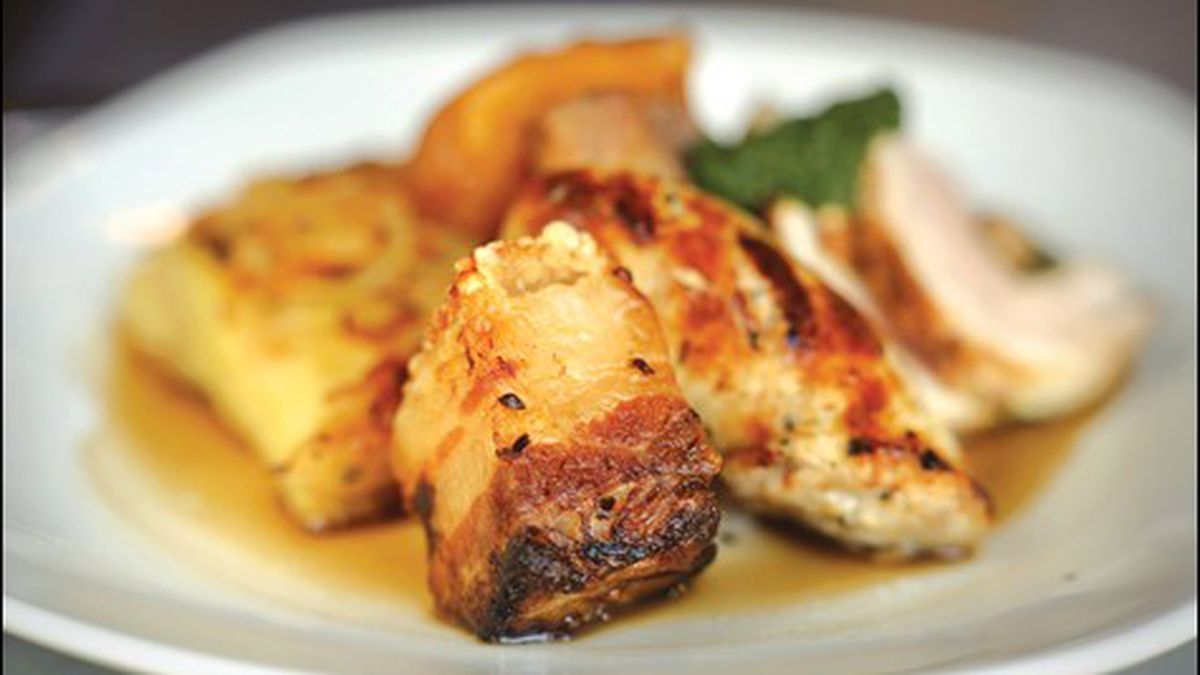 The Berkeley restaurant takes a "snout to tail" approach to its symbol and spirit guide.

When Amy Murray opened Venus a decade ago, she reemployed the tried-and-true Alice Waters concept (French and Italian cooking techniques combined with the Bay Area’s bounty of fresh ingredients) in a casual setting: a friendly neighborhood hangout with a menu of deceptively simple fare crafted from totally natural and organic local foodstuffs. Now, with Revival, Murray has taken her cuisine to a new, more sophisticated level. Taking a leaf from the Paul Canales/Oliveto playbook, Revival uses the increasingly fashionable nouvelle-farmhouse principle in which a sacrificial animal’s entire corpus is pressed into kitchen service, not just the meaty bits (“snout to tail,” in the words of the menu), and the stuff that goes with it — grains, fruits, and veggies — are as close to freshly plucked as possible. (Ingredients are sourced from within a hundred-mile radius.) These raw materials are prepared and combined with smoked, pickled, and/or caramelized herbs and spices in (occasionally surprising) ways that bring out individual textures and flavors.

The setting matches the venue’s upscale inclinations. Open since late May, it’s located in a prime downtown position near the Berkeley Repertory Theatre and other thriving destinations. The interior is in the bustling-urban-hotspot tradition, with expansive windows, high ceilings accented with billowing canopies, and worn-wood bookcases displaying rustic kitchen bric-a-brac. There’s an open kitchen and a handsome bar of distressed wood and the odd deco ziggurat. The red-medallion Grand Rapids bordello carpeting clashes amusingly with the standard Mediterranean cream/chocolate/burnt sienna color scheme. But despite the urbane trappings, the place has the same friendly, homey vibe of Venus up the street.

A tasty (if extra-rich) way to kick off your meal is with the pork rillettes, a crock of salty, fatty shredded pork with lots of slow-cooked piggy flavor. Served with (not enough) Acme sourdough toast and a sweet lemon chutney, a little goes a long way, but it was delicious. The light, pillowy flatbread wasn’t quite as uber-luscious, with its brightly flavored arugula leaves and sweet, balsamic-edged fig preserves … until one of the tiny globs of creamy marrow dotting the crust came along. Also helping the cholesterol levels to attain new heights was the “Basket of Bread,” rich, gamy lamb sweetbreads served in a paper cone with fried onion strings, a tub of spicy aioli, and some crisp, spiky bread and butter pickles for contrast.

Pig, the restaurant’s symbol and spirit guide, is featured not only in the rillettes, the green goddess salad (house-made bacon), and the frisée-arugula salad (pig’s ears), but it stars in the irresistibly named Mixed Pig Plate. A prime porker from Long and Bailey Farms was served four ways: as a coarsely ground, richly flavored sausage; as a slice of (not particularly memorable) greens-stuffed tenderloin; as chunks of fork-tender shoulder; and as extra-fatty pork belly — tasty but low on the protein. Complemented with crisp string beans and wonderful pickled ramps (spring onions), the platter was memorable — but you probably shouldn’t order it every night. Another meaty dish, the braised McCormick Ranch goat, wasn’t as rich or as culinarily successful; while the flesh had a slightly gamy flavor, and earthy chard, caramelized fennel, and pickled figs accented things nicely, the meat was chewy and dry. But the handmade pasta made an excellent palate-cleanser: Served al dente in broad, rustic strips, it was draped with sweet English peas, meaty trumpet mushrooms, a sprinkling of pea tendrils, and just enough pungent grana padano to bring it all together.

Revival offers plenty of choices for vegetarian diners, at least among the appetizers. Starters include stuffed squash blossoms with mint and aioli, squash-blossom flatbread with cherry tomatoes, house-made gnocchi with morel mushrooms, hummus with seasonal vegetables and seeded pita bread, and a salad of organic beets with frisée, arugula, and goat cheese. The only meat-free entrée is the pasta with peas and mushrooms, but you can always fill up on the house-cut French fries with blue cheese aioli and pistachio mayonnaise.

Two desserts take advantage of the year’s tastiest produce. The early summer fruit galette showcases sweet, juicy peaches and blackberries against a backdrop of tender pastry, a drizzle of peach syrup, a warming hint of fresh sage, and Straus Family‘s marvelous mint yogurt sherbet; the result was irresistible. Another seasonal extravaganza, strawberry and apricot shortcake, featured lots of equally juicy fruit atop dense, buttery cake with hints of ginger, apricot butter, and whipped cream for good measure. At the other end of the spectrum, the chocolate and cherry parfait was gooey, dark, and luscious, with juicy cherries, thick cream, and rich, fudgy devil’s food cake all mooshed together into a goblet of yum.

The thoughtfully chosen sixty-bottle wine list showcases tiny family vintners and sustainable or otherwise green wineries, both local and far-flung. (Try Emeritus‘s Russian River pinot noir with the mixed pig plate.) Most are in the $30 to $50 price range; nineteen are available by the glass. Beers include Eel River‘s Organic Amber, Hacker-Pshorr‘s Hefeweisse, Linden Street‘s ultra-hoppy Common Lager, and other seldom-encountered brews. Or one can opt for house-made strawberry lemonade, peach iced tea, kaffir limeade, or a refreshing pineapple spritzer. But the bar’s not only an attractive place to hang out, it’s also the source of several well-crafted house cocktails. The Farmer Jane was a sneaky fruit punch laced with bourbon and brimming with the flavors of strawberry, lemon, mint, and honey. The Jalisco Sour was a frothy, well-balanced, slightly citrusy mix-up of tequila, agave nectar, bitters, and egg white. And the Spring Fling combined gin, ginger, lime, and fresh basil into a bold, fresh, refreshingly verdant pick-me-up: a fine culinary metaphor for Revival itself.