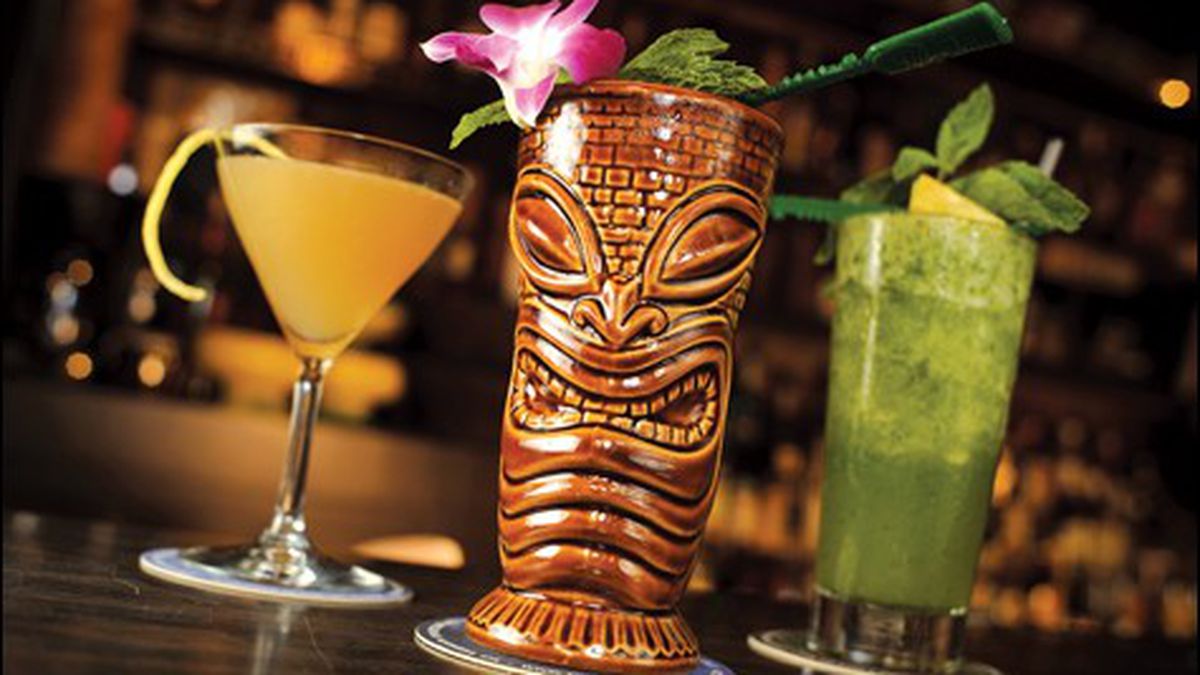 The tiki bar has a long and noble history in the Bay Area. It begins, of course, in Oakland, where “Trader Vic” Bergeron began serving goofy tropical libations and Americanized island grub out of his San Pablo Avenue bar circa 1934, thus spawning a global empire of hollowed-coconut cocktails, Jungle Cruise gimcracks, and sweet and sour spareribs. The franchise’s grandest offspring, the mai tai, was invented by the Trader himself at his Oakland hangout in 1944. The concept’s overwhelming popularity spawned a generation or two of imitations, from Trad’r Sam’s and the Tonga to the late, lamented Papagayo Room and Skipper Kent’s, a dark and delightful North Beach hangout accented with shrunken heads. Contemporary-fusion variations like Ponzu and Le Colonial have maintained the faux-frond tradition in a modern context, while youngsters like the Conga Lounge, the Kona Club, and the Bamboo Hut keep the spirit of the tiki torch blazing brightly.

The tiki bar attains an apex of sorts at Forbidden Island, a cheerful outpost of thatched bamboo, South Seas fertility gods, and tall, cool, foliage-bedecked cocktails. What makes this particular bar unique is its postmodern dedication to fresh, organic, top-quality ingredients and the sort of meticulously crafted cutting-edge cocktails that have made bartending the coolest profession of the 21st century. All juices are freshly squeezed. The grenadine is made on site from pure cane sugar. Other house-crafted mixers include syrups extracted from rosebuds, cinnamon, cardamom, and Chinese five-spice. Even the maraschino cherries are naturally colored and flavored and free of preservatives.

Forbidden Island is located on the perfectly un-forbidden island of Alameda. Co-owners Michael and Emmanuel Thanos opened the place in 2006 with master bartender Martin Cate, who departed last year. The brothers, who also co-own Oakland’s Conga Lounge, preside over a snazzy tropical getaway of their own, tucked away among the tree-shaded suburbia of Lincoln Avenue.

The low-slung main room features a long and attractive bar with fifty kinds of rum and an overarching ring of bunched thatch, like the skirt on a big-bellied hula girl. The wicker/fishnet ceiling drips with birdcages, hurricane lamps, pufferfish glims, tropical foliage, Chinese lanterns, little paper umbrellas, and dollar bills inscribed with messages from patrons past. Imbibers sit in thatched-roof booths, at wood-burl tables, or in big wicker chairs, surrounded by totem poles, palm fronds, and rattan walls hung with bamboo-framed velvet paintings. In the corner is a faux grotto complete with ferns and undulating moonlight, and out back there’s a comfortable patio brimming with potted plants, tiki gods, old crates and barrels, and several varieties of seashell. It’s a pleasantly low-key, softly lit hangout ideal for the consumption of Leilani Volcanoes and Coconut Kallaloos, while bossa nova, Beach Boys, ukuleles, and lounge lizards strike the ideal cocktail-nation note.

We kicked things off with a classic mai tai, prepared per the original recipe with rum, lime juice, curaçao, and orgeat, but it was a bit more watery than we remembered. A better bet is the Chamborlada, a frothy coconut-pineapple piña colada served in a huge goblet with a float of black raspberry Chambord and an orchid for good measure: fruity without being too syrupy-sweet and as delectable as an ice cream soda. The Monkeypod, a house creation, featured lime, coconut, and tamarind in perfectly balanced layers of flavor, but the Captain’s Grog outdid it: a rich, smooth molasses-sweet concoction jazzed with a healthy tot of Pusser’s British Navy rum and plenty of spice, served on the rocks with a bushel of fresh mint.

House specials include the Forbidden Island, a highly drinkable, deceptively light and fruity mix-up of lime, pineapple, and what the menu describes as “our secret mixture of rare spices and liqueurs,” served on the rocks with mint and orchid. Another special, the rum-based China Clipper, was tart, refreshing, and Christmas-spicy, served martini-style with a slice of lime. Forbidden Island also celebrates “Lost Classics from Legendary Tiki Bars” like Don the Beachcomber’s Missionary’s Downfall, a tall, cool glass of thick, frothy goodness. Fragrant with peach, pineapple, and a branch or two of fresh mint, it’s like a shot of alcoholic wheatgrass. Another tall one, the Sidewinder’s Fang, combined dark rum, passion fruit, and the snark of grapefruit to good effect.

The manliest drink of the evening was Spring in the West Village, one of ten cocktails on the bar’s new tiki-free Modern Mixology menu. A contemporary variation on the Manhattan, it was sweet, icy, and plenty potent, with a whiff of St. Germain elderflower liqueur for ballast. The Juice Joint Special, juiced up your basic lemon drop with the sweet, subtle flavors of peach, cardamom, ginger, and jasmine.

Forbidden Island doesn’t have a kitchen, just a fryer, so the few bar snacks are on the perfunctory side. The French fries and sweet potato fries needed salt. Ditto the so-so mozzarella sticks and the dry, leaden chicken strips. Crab Rangoon, a Trader Vic’s specialty, had a crunchy wonton texture, but the cheesy filling could’ve used more zip and crab. The guacamole, on the other hand, had a fresh flavor and a pleasantly spicy after-bite, and the coconut-battered shrimp boasted the actual taste of coconut. Our favorite was the spicy chicken bites, a dozen boneless, juicy, finger-size filets coated with a peppery Buffalo-style sauce.

Forbidden Island offers a number of special offers and events each month. On Sundays, Scorpion Bowls are only $15, and brunch drink specials include the Wrath of Pele, an incendiary twenty-ounce chipotle-vodka Bloody Mary. The first mai tai is free on your birthday; the International Flight Lounge (jetsetter-friendly music and cocktails plus actual stewardesses) takes place on the last Thursday of the month; live surf/exotica/Kennedy-era French pop music is a recurring pleasure; and on Saturday, June 26, there will be a parking lot sale of vintage clothing and accessories to help you create your very own tiki haven. Just make sure to juice your own pineapples.