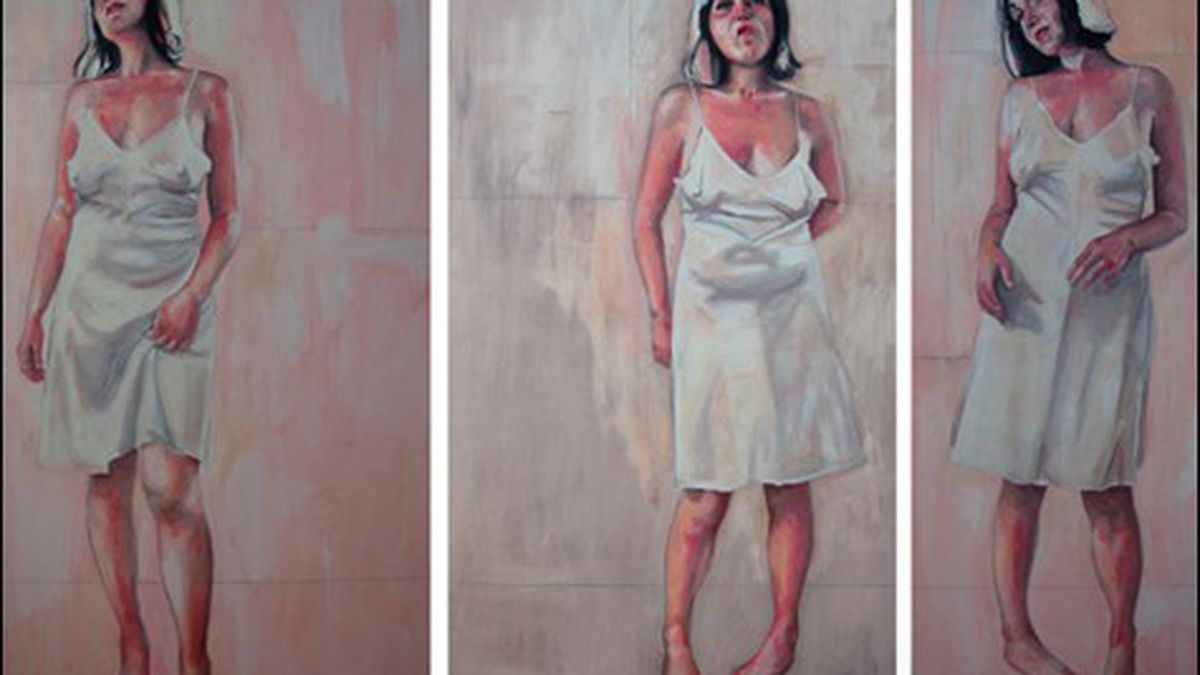 Personal But Not Up Close at Mercury 20

Julianne Wallace Sterling, Jann Nunn, and Jody Medich present work exploring the body and personal memory, but manage to avoid the sense of emotional intimacy one would hope for.

The three concurrent solo exhibitions now at artist-run gallery Mercury 20 are each, on the face of it, very personal. Figurative painter Julianne Wallace Sterling has many of her subjects strip bare before her easel, while Jann Nunn’s paintings and sculptures and Jody Medich’s drawings draw upon traumatic childhood experiences. Yet, few if any works in the show have the emotional grip that “very personal” would suggest. In fact, after a long look at the works, it rather seems that a certain distance from subject matter is what these exhibitions have in common.

As the nude recedes further toward the margins of contemporary art, Sterling seems to explore it with ever more enthusiasm — a treat for local art lovers who have been following the artist’s practice over the past year. Cliché as it may sound, it is hard to describe the appeal of Sterling’s large oil paintings without using a phrase like “wonder of the human form.” The resolution of splotchy pink and cream gradations into flesh is a pleasure to behold.

However, in this particular collection, Plural, the subjects really do seem only skin deep. In contrast to some of Sterling’s recent work, which evoked vast and perhaps thorny emotional interiors, for example, through the depiction of a woman huddled naked in the corner of a room, the subjects here seem to announce flesh alone as their raison d’être. Sadly, the result is that those who remain clothed aren’t very interesting at all.

Nunn’s exhibition, Arc of Atlas, likewise contemplates the body, albeit in a far less sanguine manner. Responding to memories of a beloved family member whose mobility was hampered by serious illness as a child, Nunn produced a series of paintings in which she delivers red and blue pigment by either stamping the rubber end of a crutch onto canvas, or similarly pounding her fists. The delicate forms they produce belie the anger suggested by these gestures. Some of them are poignant, resembling fragile organs like a set of human lungs; others are strangely vacant, taking the shape of generic spirals. More intriguing are Nunn’s sculptures, which set up a disconcerting analogy between the body and outmoded technology: One is a ten-foot-tall spine, the other a set of lobes suggesting the brain, both carved out of microfiche prints that an educational institution haphazardly discarded upon going digital.

Finally, in Stories They Told Me, Jody Medich dramatizes the stories of her grandparents who, living on the fraught border of Austria and Hungary during both World Wars, went through hell. Her images, however, develop through yet another personally significant lens: tropes from the film noir genre she devoured with her family as a child in downtrodden Detroit. Her Expressionist graphite compositions suggest movie posters or film stills. They add an intertextual dimension while, as with the work of the other two artists, setting the personal nature of the subject matter at some remove.