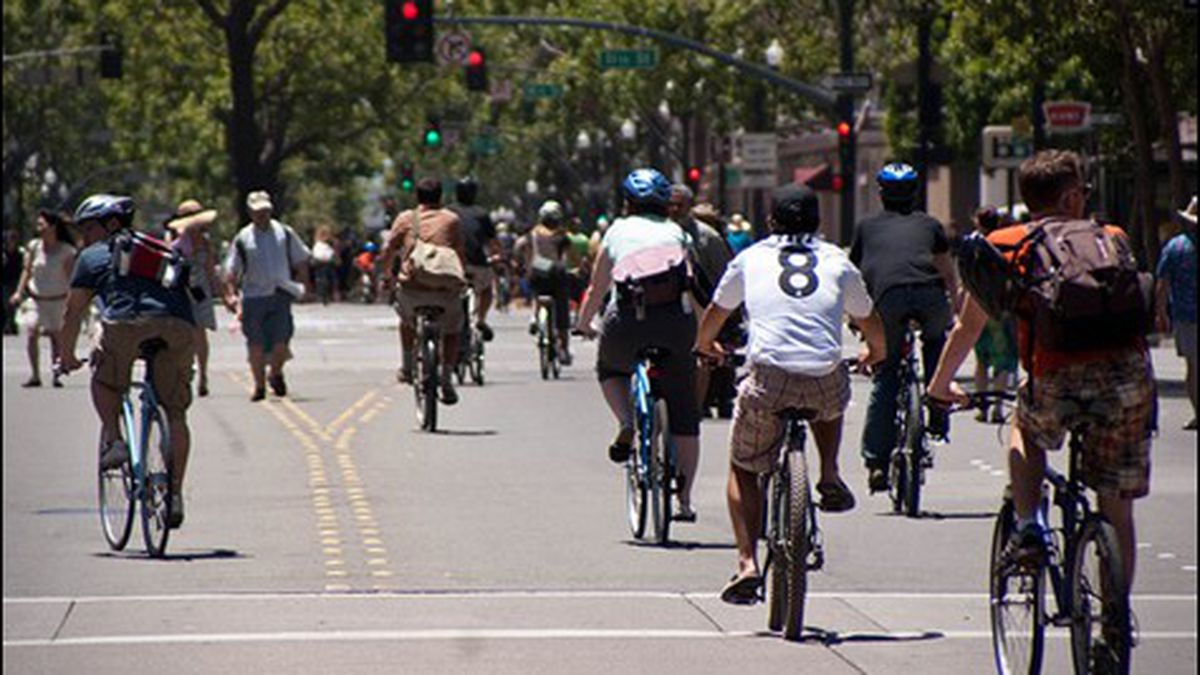 Oaklavía's utopian vision comes to Lake Merritt for a day.

“It almost feels illegal to be this free,” said a bicyclist weaving big loops in the center of Broadway during Oakland’s last Oaklavía event in 2010. The event, which closed Broadway from Grand Avenue to Jack London Square to vehicle traffic, was the city’s first experiment in a growing international movement that seeks to (temporarily) cede city streets to pedestrians and bicyclists. On Sunday, June 9, Oaklavía returns, this time to the other heart of the city, Lake Merritt.

In urban areas, most of our public space is, for better or worse, often at the mercy of the vehicles zooming through it. What happens when we take cars off the road can thus be hard to imagine. That’s why the spirit of Ciclovía — which started in Bogotá, Colombia in 1973 and has since spread to cities across the world — can border on the transcendent. “It’s almost a magical thing that takes place when people go to the forbidden,” Gil Penalosa, a founder of the Colombian event, told The New York Times in 2008. “There are no losers! It’s fantastic for business! It is the best thing Colombia has ever done!”

And in Oakland — as well as San Francisco, New York, Los Angeles, and the handful of other US cities that have since adopted Ciclovía in some form or another — the bicycle-and-pedestrian fair is equally treasured. The inaugural Oaklavía event drew roughly 4,000 bicyclists, pedestrians, unicyclists, and rollerbladers. But unlike at traditional street fairs, there were few vendors lining the street to sell their wares and command visitors’ attention. Instead, it was a car-free free-for-all with an emphasis on physical activity and social interaction. “The idea is just to let people experience their public space and do whatever they want, as long as it’s not in a car,” said Jonathan Bair, board president of Walk Oakland Bike Oakland, which organized the event.

The logical problem with that model is, of course, money. The event had to be put on hold after its successful debut in 2010 because organizers struggled to pay the fees needed to cover street closures and supporting services. But according to Bair, 2013 brought a tidal wave of fundraising support from the mayor’s office, making this year’s iteration possible. This time around, it’ll be a joint venture between Oaklavía and Love Our Lake Day, a celebration of the Lake Merritt beautification effort funded through Measure DD. Both Lakeshore Avenue and Lakeside Drive will be almost totally closed to traffic circling the lake, with just a smattering of food trucks, booths, and various dance and music performances along the way. The rest is up to you.

For Bair, it’s about transforming Lake Merritt into a more utopian space than it is during the day-to-day. “You can walk, you can bike, you can dance — whatever,” said Bair. “Oakland has plenty more spaces for people to explore with freedom. It’ll help Oaklanders envision a city that’s more about people in the first place.” 11-4 p.m., Lake Merritt redesign dedication ceremony at 2 p.m.; free. 510-654-6346 or Oaklavia.org