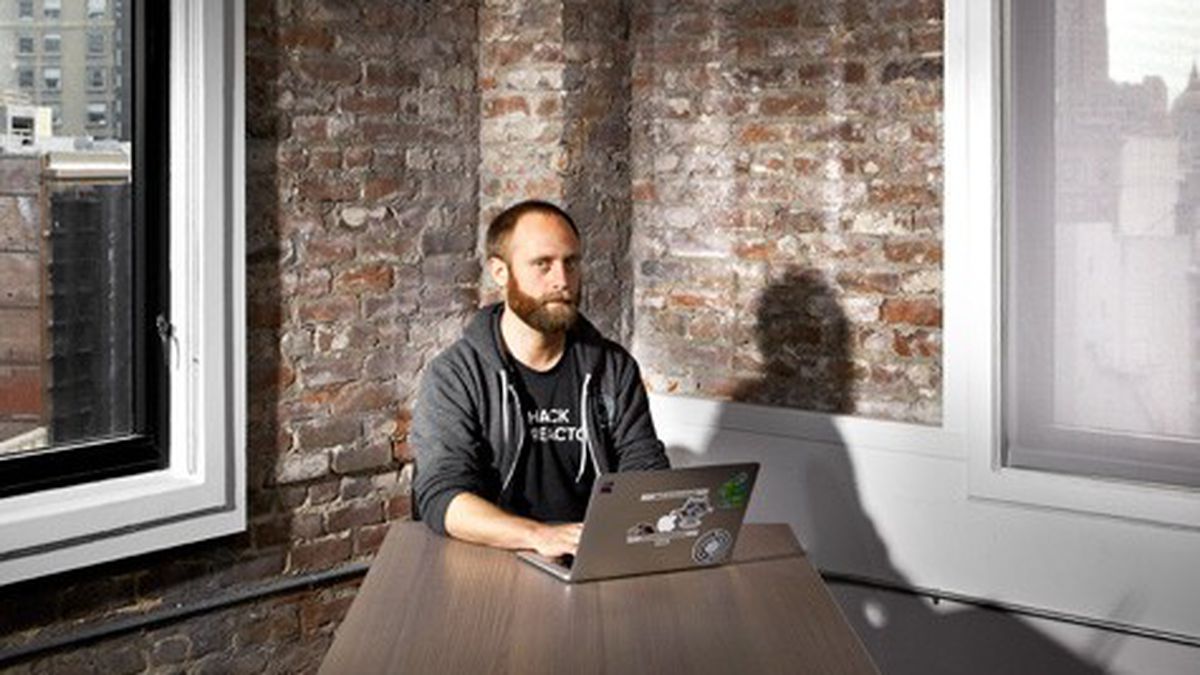 Boot camp coding schools promise big salaries after just a few months of training. But are they all they're cracked up to be?

A few years ago, Doug Calhoun was working at a technology company doing basic, low-level tech support. Seeing how well the developers around him were treated — they had to be, or they could simply walk across the street and find another job — he decided he wanted to join their ranks. He didn’t know how to code, so he asked his employer if he could be trained. When his bosses declined, Calhoun quit, bought himself a bunch of textbooks, and locked himself in his bedroom for five months.

Running out of steam and unsure of where to turn for help, he gave up and left the country to travel. “When I get back to the States, I’ll just get some crap job somewhere,” he told himself at the time. But while he was in Kuala Lumpur, he read a post on Hacker News that piqued his interest. A man named Shereef Bishay was offering to teach people how to code. Calhoun flew home to join Bishay in San Francisco in February of 2012 for the inaugural class of what is now Dev Bootcamp — one of several immersive coding schools that have cropped up in San Francisco in the last year and a half. After attending the class, Calhoun went on to briefly work as a developer, and eventually cofounded his own coding school, Hack Reactor.

The demand for computer programmers far exceeds the supply. According to Code.org, a nonprofit dedicated to growing computer programming education, at the rate computer programmers are being produced today, there will be a million more jobs than programmers by 2020. Surprisingly, less than 2.4 percent of college graduates major in computer science, which is actually fewer than ten years ago. The effect on the tech industry has been well documented: Companies compete mercilessly to attract talent, offering ever-increasing benefits like entry-level salaries that exceed $100,000, equity, bonuses, and office perks like meals on-site, lavish parties, free booze, and the like.

Coding schools like Dev Bootcamp and Hack Reactor are stepping in to meet that demand. They promise that after just nine to twelve weeks of training, students can obtain a position as an entry-level web developer with a starting salary of $90,000. But how realistic is that promise? Apparently, the answer is very — that is, if you have a knack for staring at a computer screen for hours on end.

“Dev Bootcamp was one of the first to know that this was even a possibility — that you could take folks with an amateur interest and scattered, half-learned set of skills from online resources, textbooks, friends, from hacking alone in their bedrooms, and gather that into a skill set that could be valuable to employers …. that you could give these people a foundational understanding and turn them loose on the job market, where these skills are massively in demand,” said Calhoun.

According to Chris Lee, vice president of operations and finance at Dev Bootcamp, Bishay was inspired to found the coding school after graduating with a degree in computer science, only to discover that he was using only about 10 percent of what he studied in college at his job. As a profession, computer programming is primarily vocational. But college programs focus heavily on theory.

“The world has enough compilers and operating systems. What we need are people who can build tools and web apps,” said Calhoun, citing examples of theoretical aspects of computer science that are taught in college, but rarely applicable outside the classroom.

The handful of coding schools that have cropped up in San Francisco lately — App Academy, Dev Bootcamp, Hackbright Academy (which is exclusively for women), and Hack Reactor — defy traditional education models in many ways, perhaps most significantly by explicitly defining their goal as preparing students to become entry-level developers. As Calhoun put it, “We live and die by the stories of our graduates. Nothing is hidden.”

Acceptance is highly competitive. At Hack Reactor, one student is accepted for approximately every twenty applications received, according to a post by cofounder Shawn Drost on Quora.com. Although differences exist among the schools, they share a similar format and philosophy: that coding is best learned by doing, and that absolute immersion is the best way to go. Programs are brief (between nine and twelve weeks) and intense: Students spend six days and between 80 and 100 hours a week learning code and working on projects, which sometimes includes paid client work. At the end of their course, students have a portfolio of completed work to show prospective employers on hiring day, when companies are invited to view students’ work. Sessions are held every few months.

Schooling doesn’t come cheap, however. A twelve-week course at Hack Reactor, the most expensive of the schools, costs $17,780. But, according to Calhoun, all his students who wanted to get jobs as developers — i.e., not entrepreneurial-minded ones who preferred to strike out on their own — have been hired, with an average starting salary of $100,000. And he said that figure continues to grow.

App Academy has taken a different approach to tuition. It doesn’t charge its students any upfront costs, which cofounder Kush Patel, another member of the inaugural class at Dev Bootcamp, said allows them to find and train the best talent — regardless of their ability to pay. Instead, students sign a contract agreeing to pay App Academy 18 percent of their first year’s pre-tax salary over the first six months of their new job. The Academy boasts similar figures of success: a 95-percent job placement rate, with an average starting salary of $91,000. Using that average, tuition ends up costing $16,380.

A large part of the programs’ success is due to stringent application processes and the incredible amount of resources they throw at students. The thought is: Anyone can learn to code, but not everyone has the desire or will to spend hours staring at symbols on a computer screen. So prospective students without any experience are asked to learn some basics before formally applying.

In addition to aptitude, the schools are looking for personable students — those who will be able to contribute to the collaborative environment of development teams. “This idea of a lone coder writing amazing code is something you see in Hollywood,” said Donnie Flood, cofounder and chief technology officer of Bizo, a digital marketing technology company. “Software is a team sport that requires a lot of communication.”

Before accepted students even step in the door, they’re asked to spend 50 to 100 hours learning to code on their own and given specific projects. Classes are small: At Dev Bootcamp, there are approximately 18 students per session; at Hack Reactor, the number is between 25 and 30. Teacher-to-student ratios hover around eight to one (or less), check-ins are very regular, and students are coached on giving interviews. At Hack Reactor, they’re even asked to BCC their teachers on emails with potential employers.

Calhoun regularly communicates with employers and alumni (even going so far as to hold alumni office hours) to ask, “What could we have done better? What do you find yourself wishing you knew? Are there any questions you’re too embarrassed to ask your employer?”

In some ways, this model is quite different than pursuing a four-year degree. But is it legitimate? It seems so, and that may be because coding schools have a lot to gain from running their programs well.

“One challenge of for-profit education is that it’s difficult to see what the real McCoy is from what has slick marketing,” said Dev Bootcamp’s Lee. “That’s part of the tragedy of for-profit education — there are going to be predatory institutions that make a lot of promises and deliver very little. How do you validate what’s real and what isn’t?”

But there’s another element besides education involved in becoming a valuable computer programmer, and that’s personality. The people I interviewed told me that many companies are more interested in a “culture fit” and care less about where or how an engineer has mastered his or her skills. “What we’re really looking for is culture match,” said Flood, who has been in charge of hiring new developers at Bizo. “There are a lot of smart people who can do this job. In computer science in general, a lot of what you learn is the dedication and the grit and the grind of computer programming. That’s part of what makes a good developer: long hours and the tenacity to work through bugs without pounding your head against the wall.”

Dan Croak, chief marketing officer at ThoughtBot, said he has hired students from App Academy and Dev Bootcamp after an additional three-month apprenticeship period. “We don’t have a bias towards [a background],” he said. “Our CEO doesn’t have a college degree. What’s nice about these boot camps is that you have a pretty good expectation of where someone is going to be.”

And some students are finding coding academies more attractive than four-year programs. Savannah Kunousky began studying computer science in the honors program at Western Washington University last fall. But she was frustrated by what she perceived as a total lack of caring by her teachers and a general lack of resources.

“I was in a one-hundred-person lecture with a teacher who didn’t care about what we were learning,” she said. “Maybe he had other stuff going on or didn’t want to deal with teaching beginners. I began studying for finals and just felt like, ‘This is a horrible way to learn.’ There’s no reason for me to sit here and do these projects that I’ll have to spend twenty hours in the lab on when I know this project should not take me twenty hours.”

So Kunousky applied and was accepted to study at Hack Reactor this summer. She’s not alone. Calhoun told me there are a “significant” number of students who have formally studied computer science or a related field who enroll in Hack Reactor. Patel estimated that 5 percent of his students have come from four-year programs. (“If you tried to learn this for four years, maybe this isn’t the best fit for you,” he said).

Mike Ng graduated from Amherst College with a degree in computer science in the spring of 2012. But when he began interviewing for computer programming positions, he quickly discovered that there were large gaps in his practical knowledge. He knew how computers worked and about data structures and algorithms, but that wasn’t what employers were looking for. So he enrolled in App Academy.

“I didn’t even know what it was I was missing until I began interviewing,” said Ng. “What I learned directly translates to my job. I was incredibly marketable, because I had a portfolio of ten different projects. Employers could read my code and see exactly what I had already done.”

Until many more students begin studying computer science, the demand for programmers seems unlikely to decrease anytime soon. So if you’re looking to make a decent salary, have several thousands of dollars handy, and have an aptitude for loads of computer work, you might give coding a try.

Editor’s note: Due to a misunderstanding, we erroneously stated that App Academy’s average tuition is $8,190. However, it’s actually double that amount because students must pay 18 percent of their first year’s pre-tax salary in the first six months of their new job, not 18 percent of six month’s worth of their pre-tax salary. This version has been corrected.