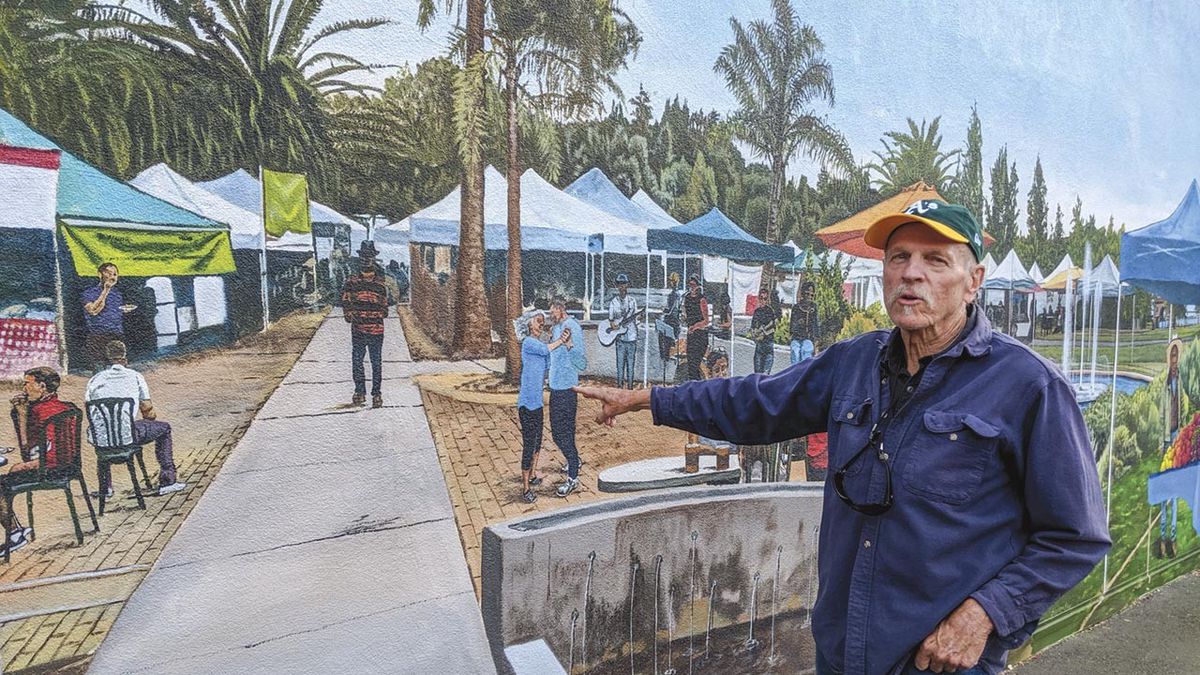 STEFEN is a primarily self-taught artist and muralist, who after leaving Nevada and traveling through Europe decided to call Berkeley his home in the late 1973. “I moved here for the openness and truth of Bay Area,” he recalled.

After a year of living and working in Berkeley, the n27-year-old did his first mural on the side of the Dutch Boy Paint Store in downtown Berkeley, sparking a “mural movement” in Berkeley.

“When I first came to the Bay Area, my canvas paintings were getting larger as I was going on and, and it occurred to me to paint on a big surface,” said the artist, who just goes by one name. “So, I talked with the people at the Dutch Boy paint store. It was almost as if they were waiting for somebody to come and do something with their wall. I had known only one other person doing murals on walls and public spaces at that point. I was the only one doing murals in Berkeley at that point. A lot of people saw the mural, and I think that sparked a lot of interest and inspired people to do similar things.”

Since that time, the now 72-year-old artist has completed well over 100 murals for the public, businesses, and private homes. The ones most beloved by Oakland are his large murals of Lake Merritt on the wall of the Peet’s Coffee on Lakeshore, and his latest, an homage to The Lakeshore Farmer’s Market and The Grand Lake Theater on Walker and Rand Avenue. But his murals can be found all over the Bay Area, including Montclair, San Francisco, Hayward, Alameda, Albany, El Cerrito, San Pablo, Richmond, Pinole, Orinda, and Martinez.

If you pay close attention to STEFEN’s paintings, the first thing you’ll notice is the incredible detail. Not only are they breathtaking from a distance, but they are also very intricate, almost ornate, in capturing the nuances and particulars of a scene. The Lake Merritt mural, for example, shows The Cascade Stairs as they were some time ago. The Farmer’s Market mural has a stone elephant at Splash Pad Park that has not been seen in years.

“I usually go to take photos and to work from,” he said. “The people in my murals are usually people that were there when I took the photo. “In the Farmer’s Market mural, there’s an exception. The vendor standing in the front is a beloved man there, and I thought it was important to place him up front.”

What makes STEFEN such a treasure to The Bay Area is, unlike other muralists, he focuses on the people and places that we all love and admire, while chronicling both his and our personal histories. His murals can take up to 240 hours to create. People who have witnessed him work will notice how painstakingly he begins, with slight sketches on Jesso white, and how just as carefully he finishes them, carefully filling in each detail with a thin paint-brush that seems more suitable for calligraphy than painting a huge wall. He treats every grain of wood, every wrinkle of fabric, every blade of grass, as its own creation. His love for these places, and the people who live and work there, shines through in everything he has done in long, illustrious career.

Even as the muralist has done work for private homes and businesses, he still prefers working on public pieces. “I prefer to do large scale murals that are visible to anybody and everybody.” STEFEN paints our world.&#8;

D. Scot Miller
Managing Editor of The East Bay Express, Former Associate Editor of Oakland Magazine and Alameda Magazine, Columnist-In-Residence at San Francisco Museum of Modern Art (SFMOMA)'s Open Space, Advisory Board Member of Nocturnes Journal of Literary Arts, and regular contributor to several newspapers, websites and magazines. Miller is the founder of The Afrosurreal Arts Movement through his publication of The Afrosurreal Manifesto in The San Francisco Bay Guardian, May 20, 2009.