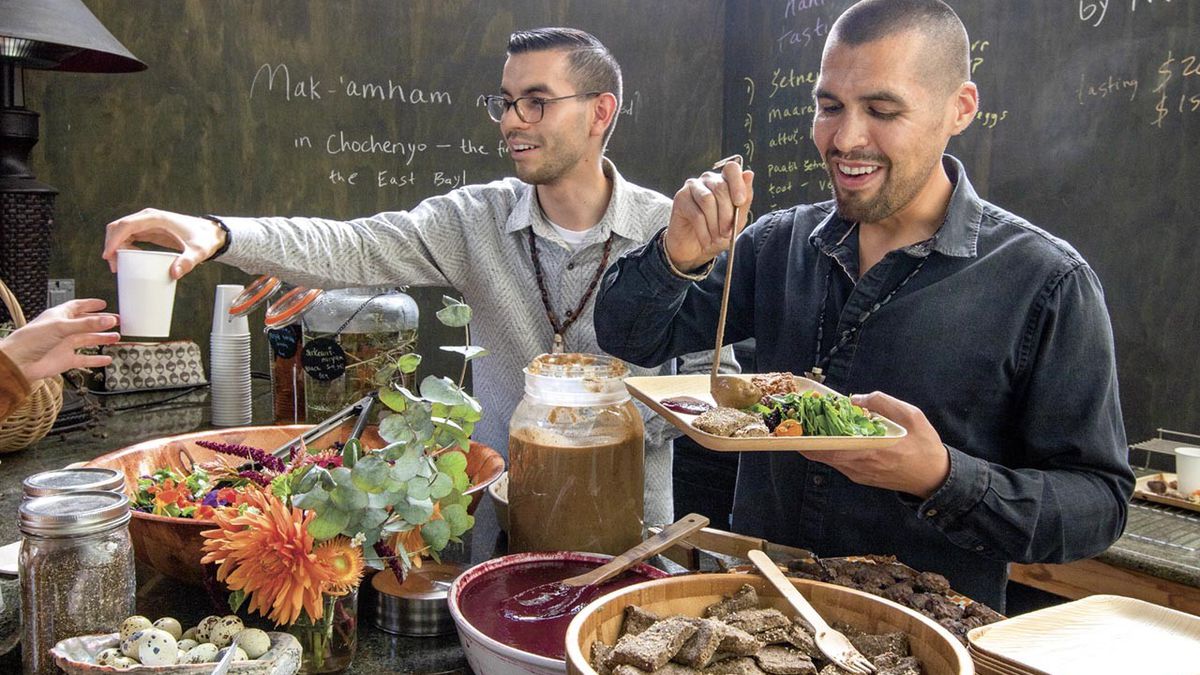 On a recent sunny Thursday in Berk­eley, lunch-goers flocked to the leafy back patio of University Press bookstore, lining up to partake in a special meal. Atop the serving bar were dishes such as fresh berries, local greens with strawberries and nuts, smoked salmon, and potatoes roasted in duck fat. This is Cafe Ohlone, a pop-up restaurant where visitors can sample the traditional foods eaten by the Bay Area’s native peoples — known broadly as the Ohlone.

Vincent Medina, a member of the Muwekma Ohlone tribe and one of the cafe’s creators, greeted guests as they approached the bar, making a plate for each person and discussing their questions about the food and culture. Louis Trevino, Medina’s partner, cafe co-founder, and a member of the Rumsen Ohlone tribe, prepared clear glasses of iced tea made from native plants behind the bar. The cafe, which opened in 2018, is a result of decades of research and effort on the part of the co-founders and their tribes to actively work toward a cultural revival — re-learning their native languages and practices that were denied them by colonizers.

Medina and Trevino have each learned to speak their tribes’ Ohlone languages — Chochenyo and Rumsen, respectively. One way they have done so is through listening to recorded accounts from their elders speaking the language and describing their customs. Recorded in the early 20th century by anthropologists and linguists from Washington D. C., they include elders’ accounts of traditional knowledge of all kinds, including information about traditional foods and how to prepare them.

In the early days, Medina said he could easily spend three to four hours each night studying the language — reading notes and cross-referencing them with other resources to help remember and solidify it. They would speak with family, reinforcing traditional place names, and sharing stories using words from their language. They are no longer in the beginning stages of cultural revival, said Medina. Now, using conversational greetings and even basic sentences are commonplace in his tribe.

“We’re hearing all of those phrases and words echoed in our community with a lot of pride,” he said. Elders are the ones leading this work and it makes them really happy to hear the language being used widely again.

One of the most rewarding parts of this process for Medina and Trevino has been learning about traditional practices, most notably in food preparation, and then practicing and sharing them with older family members.

“Sometimes, we’ll talk about foods that we haven’t experienced yet at the time and we’ll describe it to those family members, and they’ll have had it or they’re excited to talk about it,” Trevino said.

In one instance, he had learned about how to prepare Yerba Buena tea, a plant native to the Bay Area that is related to mint. He decided to prepare it for his grandmother — and she was delighted. It turned out she knew and loved the tea, and not only was excited to have it again, but also was pleased that Trevino was enjoying the preparation process.

“Those are really striking moments too when we are reconnecting with our food traditions and realize these traditions are so much closer than we might have thought before,” he said.&#8;