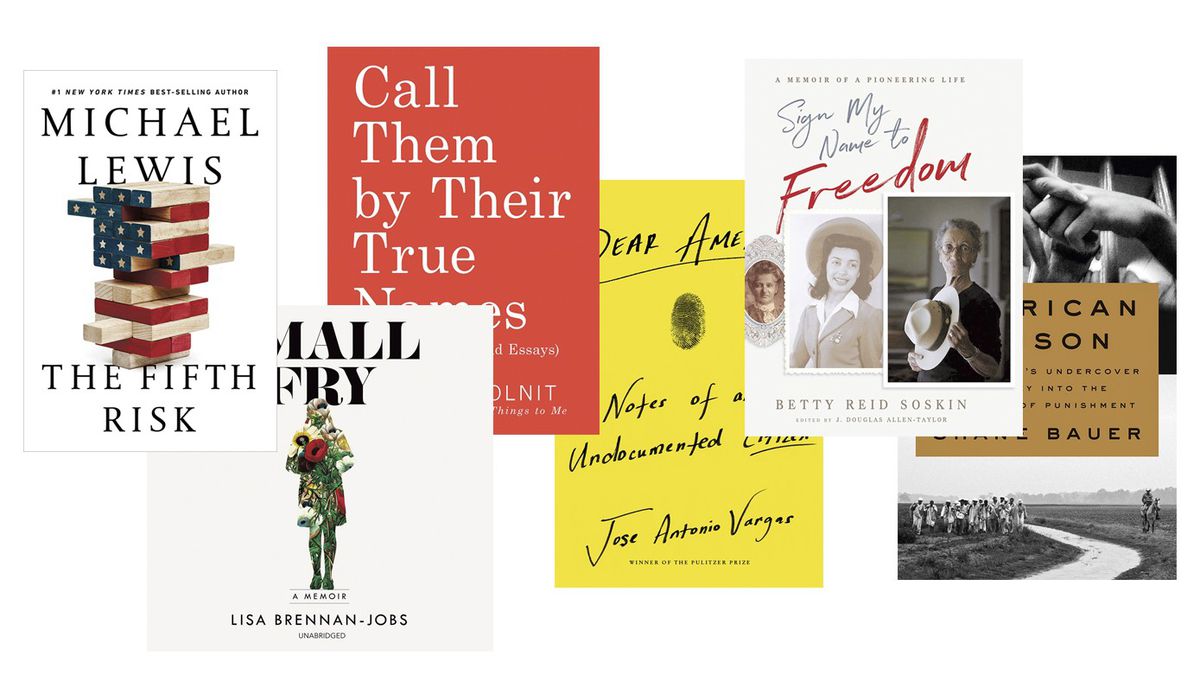 In the age of “fake news,” it’s good to know where to turn for writing rooted in reality. Bay Area authors are noted for their outspokenness, and most work mightily to get the details right. Whether the subject is bureaucracies, prisons, or immigration and the form is reportage, memoir, or essay, the following selections make for powerful and timely reading.

The fifth risk is the one so dire you don’t see it coming. Berkeley’s Michael Lewis, author of Moneyball and The Big Short, brings his personal brand of immersive journalism to national politics. In writing about the Trump administration’s first year in office, Lewis spotlights three government bureaucracies — the departments of Energy, Commerce, and Agriculture — and recounts how few new staff members brought in by Trump seemed to want to learn how they function and what purposes they serve. Perhaps you don’t want to spend the holidays feeling infuriated, but Lewis’s book, which does contain interviews with workers who do excel in their jobs, might offer some insight and courage with which to face the new year.

When his mother put him on a plane from the Philippines to reside with his grandparents in Mountain View in 1992, 12-year-old Jose never thought he would be still “illegal” decades later. Winner of a Pulitzer Prize, Vargas reports first-hand on the immigration wars, despite the fact that his notoriety makes him a target for deportation. Dear America captures the frustrations and absurdities of being undocumented in the United States, a call to arms for those who hunger for freedom in what was once — and still is — a nation of immigrants.

American Prison: A Reporter’s Undercover Journey into the Business of Punishment

A senior reporter for Mother Jones, Oakland journalist Shane Bauer took a job as a prison guard at Winn Correctional Center in rural Louisiana and quickly learned that the private company that ran the institution was interested only in the bottom line. Pay for the guards starts at nine bucks an hour and never rises much over time, while each inmate is worth $34 per day. The focus on profitability leads to dangerous understaffing, and during his four-month stint, Bauer documents numerous stabbings, scores of “use of force” incidents, and a perhaps preventable suicide. By chronicling the history of private prisons, Bauer demonstrates how dangerous incarceration can get when no one is really minding the inmates.

Call Them by Their True Names: American Crises (and Essays)

In her new collection of essays, the journalist, San Francisco activist, and author of Men Explain Things to Me addresses topics such as climate change, homelessness, the death penalty, and feminism. Not surprisingly, the focus of her ire is our 45th president. “Eight Million Ways to Belong,” is a letter to Trump on the eve of the 2016 election, referring to the 800 languages spoken in New York City, in voices that need to be heard. In “Death by Gentrification,” Solnit investigates the San Francisco police shooting of Alejandro Nieto, struck by 14 bullets when he allegedly pointed a Taser at them. Fearless, furious but still hopeful, Solnit pushes her readers to commit to the ideals that should never have come under question in the first place.

Sign My Name to Freedom: A Memoir of a Pioneering Life

Soskin has packed a lot of living into her 97 years on the planet. Not only does the Richmond resident rank as the oldest ranger in the National Parks Service, but she has delivered cash for the Black Panthers, co-founded Reid Records in Berkeley, helped integrate the East Bay suburbs, and was instrumental in the establishment of Rosie the Riveter/World War II Home Front National Historical Park. After Soskin inaugurated a popular blog, her cousin, Oakland journalist J. Douglas Allen-Taylor began compiling selected posts into a memoir. The result is Sign My Name to Freedom, a lively and insightful account of her experiences across decades of social turmoil.

In her new memoir, the daughter of Steve Jobs reveals what it was like to grow up as the eldest child of one of the most famous and wealthiest people on the planet. Small Fry, however, is far from a celebrity tell-all. As she deftly chronicles her Peninsula upbringing, Brennan-Jobs seems intent upon figuring out why she and her father had such a difficult time loving each other. Whether reacting to her birth with “It’s not my kid” or reneging on a promise to pay her college tuition, Jobs could be mean and capricious, but at the end, when he was dying of cancer, the two were able to find some peace and understanding. Small Fry ends up tackling the big issues of family with insight and compassion.

Corrections for the Week of September 1