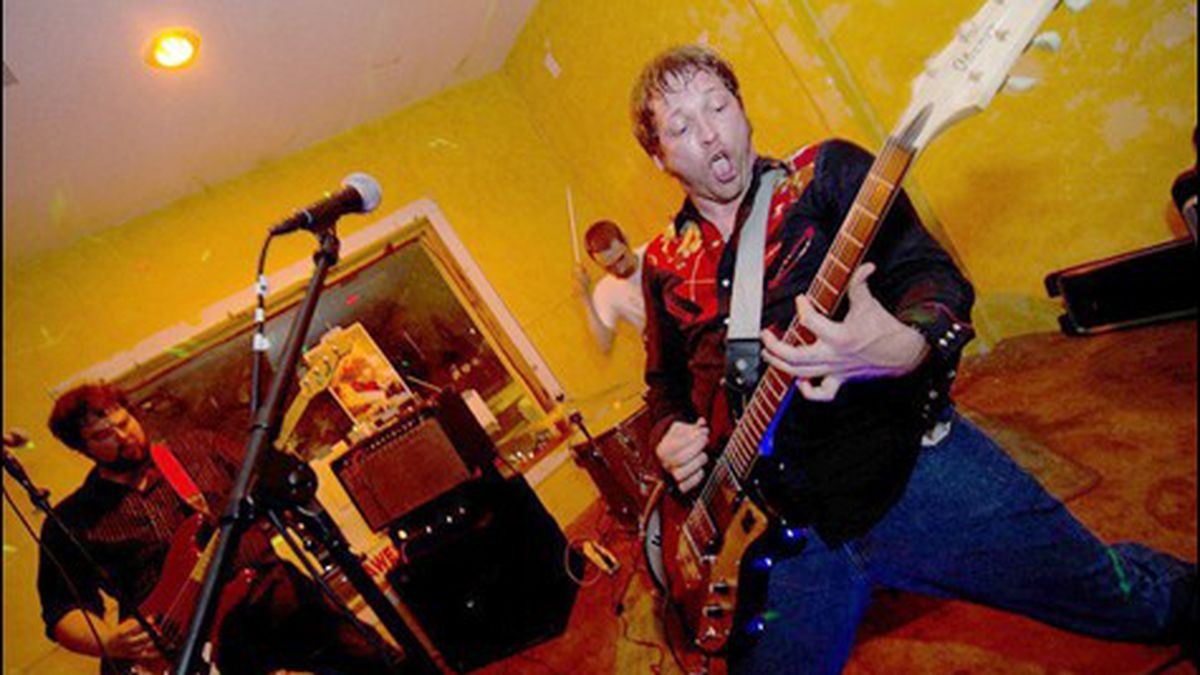 The Bay Area's own Victory and Associates take us through the dirt-broke lows and rock-star highs of a weeklong SXSW tour.

Hometown kickoff! I spend most of the pre-show set wondering what the turnout is going to be, but my worries are quickly assuaged when folks start coming in. I fret, I fume, and I am constantly concerned, but you rarely let me down, Bay Area.

Then we’re up. The first two songs go swimmingly, with decent sound and good performances. We play a pretty new song, and lo! The power on all the amps shuts off. Weird. It comes back on, I make a joke about PG&E not caring for our new material, and we try once more. Again, it goes off. The house engineer does everything in his power to find out what is going on, but these intermittent power outages happen throughout the set and we have to cover for this abrupt change in dynamic range. We cut “Friend Rock City” two lines early; “Wildly Plausible” and “Plausibly Wild” both get lines in the choruses that are a cappella by necessity, and we cut “You Can’t Stop the Signal” out completely and call the set a touch early.

It’s frustrating; I won’t lie. But we tried to keep it light and I will say this: If we’re going to have a show where there are these kinds of issues, it might as well be a block from where you live on the first day of the tour.

Pappy and Harriet’s is your ultimate remote roadhouse: the only place in many, many miles, a secret location that you always kind of hope exists, and maybe even does exist in your mind, before the crushing banality of actual reality quashes the dream. The bartenders will brook no tomfoolery, the doorman most definitely can kick your ass (between bowls), and the people are so disarmingly friendly you think you are in a David Lynch movie. To be clear, I mean that as a compliment. Everybody is quietly humble about all of the badass stuff that they are doing: that dude builds his own guitars, this one used to race motorcycles in the Forties, this guy is building a rocket. Their stories will unfurl like beautiful tapestries if you ask, but only if you ask. It’s totally surreal.

Many huge bands play Pappy and Harriet’s as a warm-up for the nearby Coachella festival: Robert Plant, PJ Harvey — and tonight, it’s us. On open mic night. Yes, you read that right. Awesome. We get up and do our thing, and suddenly the acoustic Johnny Cash covers and conversation-volume guitar compositions give way completely. This, folks, is unapologetic rock and roll, brought to you by Victory and Associates. But instead of fleeing the area, people watch and are into it. We uncoil and spring like a desert predator, throwing it all out there. Some folks even start dancing. Later, a fellow buys us some beers, the first of many. It turns out his band played a couple of the Minutemen’s last shows before that final tour with R.E.M. We swapped punk-rock war stories and bonded over the insane calling that is playing music.

This van does not run on hugs or high fives. I write this in the hopes that we will make some damned money tonight. Look: It’s a sad fact of nature that bands do not make money anymore, at least little bands. It’s not, like, “oh, it’s not a lot of money.” It’s laughable. The petroleum companies get paid for the gas, the fast food places get paid for their failure food, the bar staff gets paid, the sound people, the door guys, but the bands getting paid? Nah, man. Rock and roll is a pyramid scheme. And if you talk about money as a band, you’re suddenly mercenary or careerist, instead of just trying to be able to keep doing what you want, or even arrive at your destination safely. How bougie of you, dude!

Anyway: Rogue Bar is a punk-rock watering hole that sits next to a liquor store, the customers of which appear to be largely shirtless young gentlemen with a Breaking Bad sort of look to them, acquiring sugary snacks with both aplomb and purpose. (You get that Blueberry muffin loaf, Skinny Pete, and you enjoy it.) The bar itself is cool though — central casting for “punk rock bar,” to be sure. The walls are covered in old fliers and photos of semi-tastefully exposed breasts. You can smell the leather from the studded belts before you enter and the door to the toilet in the men’s room is comically loose on its hinges. We call this character.

There are some shows that are like religious experiences, some that you etch in your mind as war atrocities, and then there are the ones in the middle. That’s what this one is for us. I break a string on my primary guitar at a key part and something about the stage sound isn’t quite right. We connect a few times with folks, and it’s decent-plus. But during the most rousing parts of “Plausibly Wild,” I don’t see even the remotest inclination of anything other than noble indifference from the folks at the bar. I cut the last song, and we wrap it up. For fuck’s sake, it’s a Tuesday you know? Thanks, Arizona.

Arizona apparently cannot abide by Daylight Saving Time, which is clearly a tool of the Socialist overlords. This, like many other elements of the state, is willfully ignorant and backward-leaning at best, and vaguely lunkheaded and fascist-feeling at worst. It’s also rather harrowing when you suddenly realize, having left Arizona, that a show you thought started at 9 p.m. actually begins at 7, meaning you’re already late. That said, we ruled the stage in Santa Fe. Rock was delivered; good times were had. There was loose affiliation with success.

As the premier all-ages venue around, Warehouse 21 was already full of kids when we got there, and it was looking like this show will be a complete winner, despite our lateness. But then, apparently, somebody caught wind of a real cool party, which nearly immediately sapped away 90 percent of the crowd before we were even finished setting up. Yup: a free, awesome rock show from a band that traveled untold hours still rates far lower than drinking warm PBRs at Kimmy Stadler’s place.

The party line for a band like us is that it doesn’t matter if you are playing for eight people or eight hundred — if those people are truly locked in to what you’re doing, it makes all the difference in the world. It’s a slippery slope, and, often, a justification for an endless series of lies you tell yourself in order to slap on a grin and bear another letdown. But when it’s really true, it hits you harder than anything else, and the long drives, the insulting compensation, the noble indifference all melt away. It’s the most amazing feeling in the world, and I’d be lying if I said it didn’t completely overwhelm me this night. It’s a white hot flash of something wonderful and pure and it cannot be bought with the most pricey PR person or pertinent hype.

We sell more merch to these people then any show since our last record release. We sell the last of our collectors’ plates (!), and we truly are hurting for being out of medium shirts. But the good people of Santa Fe deliver and deliver hard, with an enthusiasm that I wish I could export to San Francisco. City of Santa Fe, we thank you for your generosity and largesse. Because of you, we have the power to fight on for another day.

After you enter your tenth hour of consecutive driving, the romanticism of the open road loses its luster, the gas stations and roadside convenience stores of one state melting away into the gas stations and roadside convenience stores of another. When I speak to non-rock people about the majesty of touring, it’s all the myth of nonstop groupie sex and “Live At Budokan”-style stages. Nope, it’s truck-stop food, open highway, and entirely-too-expensive gas, all just for that thirty-minute-or-so period when you get to truly live. It’s traveling long distances, moving heavy things from one place to another, and waiting for a very long time, just in order to get up, make some noise and leap around for about thirty minutes or less — and then, only to move those same heavy things back into the van, sleep, and repeat. It’s absurd, it’s grueling, it’s at times inhuman, but you do what you have to in order to do what you want to. Sometimes, that involves a near-inhuman level of driving to play a show that probably does not justify the Herculean effort put into getting there. But the fact of the matter is that you just never know. The other fact of the matter is that the United States is really fucking big.

We get to Austin late, with just five minutes to get to our SXSW label showcase. I dashed through the doors of the Sidebar, and leaped on to the stage, my guitar already plugged in by my bandmate Evan. Magic time. Switch on, suckers.

We played pretty damn well, and we finished the set heaving and winded, drenched in sweat, every inch of our souls poured into the art — only to have the next act come on stage to do its thing. There is an assembly line-like efficiency to a SXSW showcase: no time for prima donnas or self-involvement. Set up as fast as you can, do your thing, break down, and make ready for the next act. It’s a little dehumanizing at best — less like a real show and more like a series of epic busks — and the more cynical among us can question its very point altogether. There were no Big Money Bubbas waving contracts to sign, no enraptured groupies throwing their pliant and taut bodies at us. But that wasn’t what we even expected or wanted. (Well, maybe the latter would’ve been nice.) It’s almost impossible to get across for anybody that doesn’t live the lifestyle, but those that do this for money, or even to feed fevered egos rarely last or achieve. You do it because it’s a calling. You sink every part of your being into every vocal line, guitar chord, bass note, and drum hit. You put forth every social inequity, unfairness, frustration, and woe you have and erase it completely in the wave that encompasses you.

Then you get the hell off the stage.

And so, at the end of our tour, what is the greater meaning? Is SXSW “worth it”? Is it really about music, or is it about a mass confluence of social media and hype? Somehow, it’s about both, but it’s mostly about possibility. It’s what you make of it, and what lit my fire here was seeing people happy and self-empowered: setting up generators, wheeling and dealing amazing off-the-cuff showcases, audiences being more receptive than usual. There’s a certain kind of “why not?” mentality here, one that I’d like to see more of in general life.

I had a blast and next time is going to be even better. See: We’re Victory and Associates. We chew up pennies and spit dimes, son.

To find out more about Victory and Associates, visit VictoryandAssociates.net. To see the full, unabridged version of their tour diary, click here.

Food to Drive You Loco