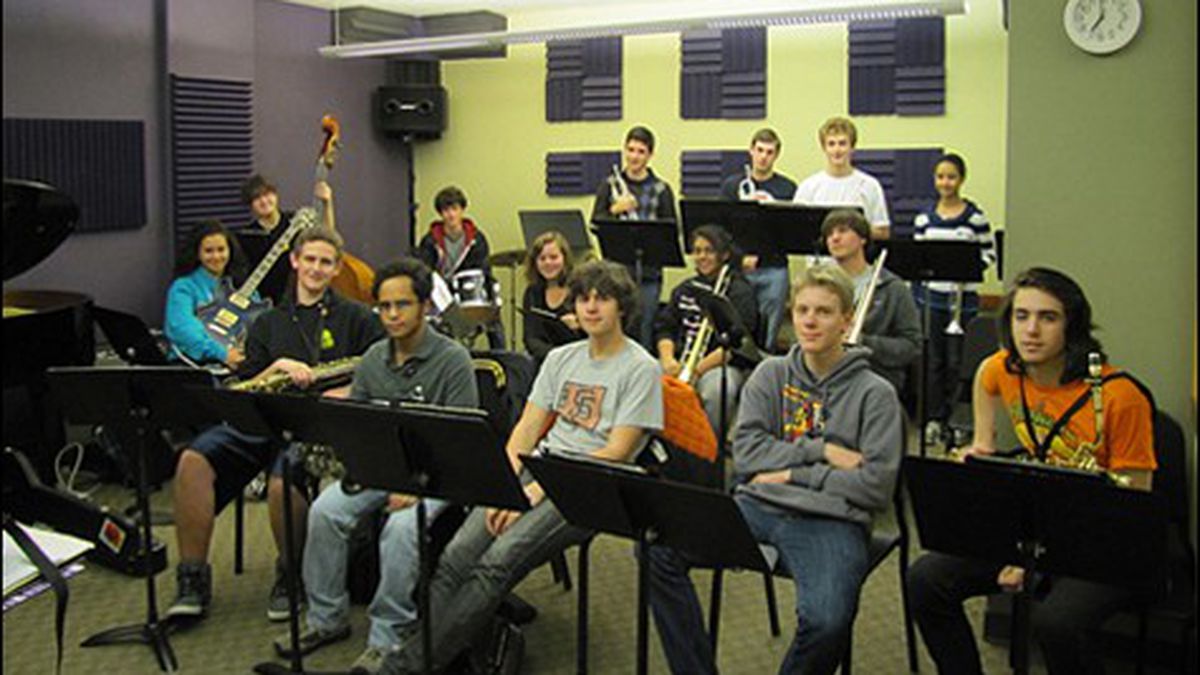 A New School of Jazz at the Jazzschool

There’s no ‘dah,'” Keith Johnson told the trumpet, trombone, and saxophone sections of the Jazzschool Thursday Night Studio Band during rehearsal in a room barely large enough to accommodate the ensemble’s fifteen musicians from high schools from throughout the East Bay. The director was attempting to get them to more accurately articulate a series of “da-da-da-da-da-da” triplets.

“It’s like Morse code,” Johnson added before the players again pressed horns to their lips and, joined by the rhythm section, continued practicing the John LaBarbara composition “Message from Art” in preparation for a concert Sunday evening at the El Cerrito High School Theatre. New Orleans trumpet great Terence Blanchard will be the guest soloist with the Thursday night band, as well as with the more advanced Jazzschool Monday Night Studio Band.

At the end of the number, Johnson complimented drummer Athan Gousios, a senior at Campolindo High School in Moraga, on how nicely he played the underlying shuffle rhythm. During earlier rehearsals, Gousios had been having trouble getting the old-school groove — which involves playing a swing pattern on ride cymbal while shuffling on snare drum, thus creating a sense of forward momentum — but he finally nailed it, much in the manner of the late Jazz Messengers leader Art Blakey, to whom the tune is dedicated.

On a normal Thursday evening, the Thursday band would be followed by the Monday night band, which has retained its original name despite having switched its practice to a different day. The Monday band’s rehearsal had been cancelled, however, because eight of its members — exactly half the band — were in Boston with the SFJAZZ High School All-Stars Jazz Orchestra.

“We shared some students in the past,” Johnson said following rehearsal. “This year we share a lot.”

Earlier incarnations of the Monday night band won first place three years in a row at the Next Generation Festival in Monterey, which led to appearances in the Monterey Jazz Festival’s main arena. Both the Monday and Thursday bands will be in Monterey on March 31 and April 1 to compete at the Next Generation Festival. The Monday night band was named “Best High School Large Ensemble” in the US by Down Beat magazine last year. And it has done two tours of Europe, including appearances at the Montreux Jazz Festival in Switzerland, Jazz a Vienne in France, the Umbria festival in Italy, and the North Sea festival in the Netherlands, as well as less-formal performances at town squares along the route.

At 29, Johnson isn’t too much older than his Jazzschool students. He began directing the bands five and a half years ago, not long after graduating from San Jose State. Even before he earned his BA in music, however, he was hired to lead the jazz band at his alma mater, Portola Middle School in El Cerrito. He’s now in his third year as the full-time music teacher at El Cerrito High, another of his alma maters.

“I was a late bloomer when it comes to jazz,” said Johnson. “I went to school to become a music teacher. My focus was classical music. I wanted to be a conductor. That’s still one of my passions.”

He had played trumpet in the jazz bands at El Cerrito High and San Jose State, but admits that “it wasn’t necessarily anything that I was hooked into.”

“When I was nineteen, my sophomore year of college, an opportunity presented itself at my old middle school,” he explained. “They got a new band director, but the guy didn’t want to do the jazz band. They asked me if I would come in and do an eighth-period jazz band. I jumped at the opportunity. That’s actually what kinda pushed me over the edge to get into and learn the styles and genres of jazz.”

Jazz band teachers have struggled for years to maintain a balance between reading charts and improvising, but Johnson has found that most students who audition for his Jazzschool bands already have their solo chops together.

“I’m their band director when they’re here, but they come from various high school programs, like Berkeley High and Northgate, and they get a lot of good training there first,” he said. “I get the really fun job.”