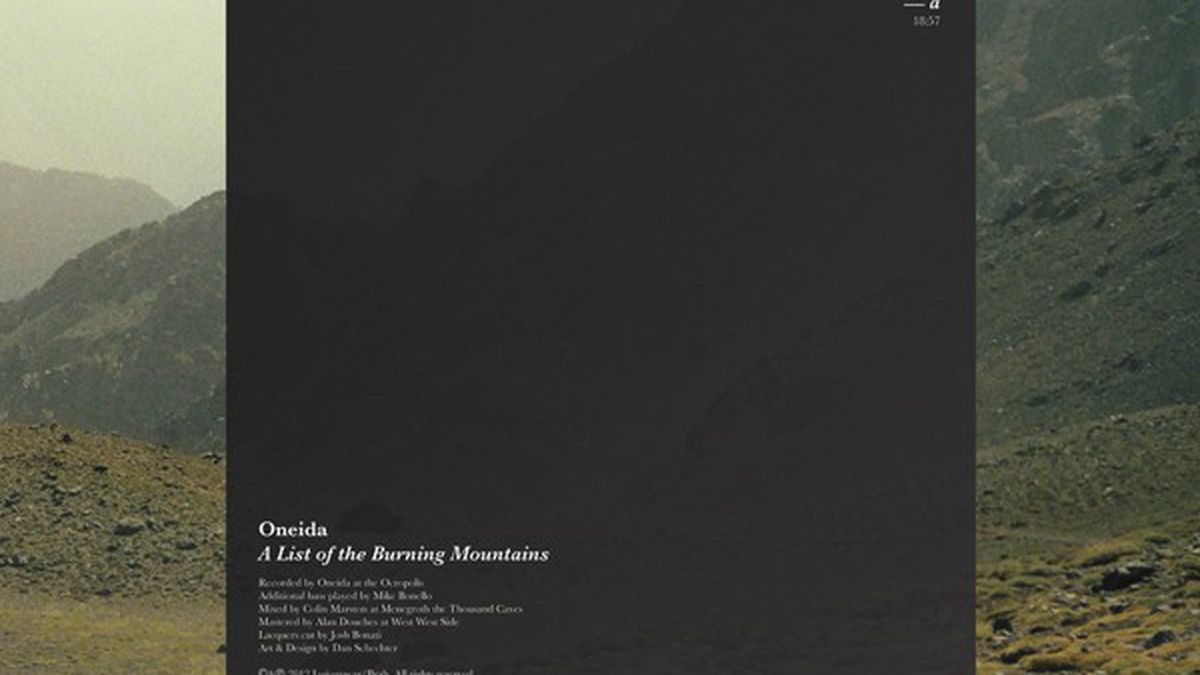 Cling to tradition when listening to Oneida, “the overlords of experimental rock,” and you might just end up lampooned in its liner notes. Last week’s vinyl-only release of A List of the Burning Mountains (LOBM) came with an unsurprisingly opaque announcement: “If Absolute II was indeed ‘like hearing the Doors without Jim Morrison’ on account of its not featuring any drumming, consider LOBM our ‘Ghost Song.'” Absolute II, a 2011 textural tour de force, arguably had more in common with a Philip Glass chorale than with any of Oneida’s earlier records, and was nearly drumless (the band had called drummer Kid Millions its “anchor” a year before). The analogy to “The Ghost Song,” a track produced after Morrison’s death by The Doors’ remaining members jamming under a recording of Morrison reading poetry, makes sense because, in a way, LOBM is Kid Millions’ resurrection.

Oneida didn’t waste its album title on an empty metaphor. Much like the spooky hallucinatory lyrics between various movements in “The Ghost Song,” Kid Millions’ drums on A List of the Burning Mountains‘ two twenty-minute tracks lead us on a wandering tour over a wide range of musical mountain tops, all of which are on fire. Through grit, groove, fuzz, feedback, and voracious wails, you can feel your heart linger in your mouth for full minutes past each of the many peaks. Our percussionist guide pauses but never looks back, dragging us onwards into the inferno. There’s so much in the landscape to surprise and enthrall, it’s tempting to call LOBM an experimental triumph, but, much like firewalking, it probably isn’t for everyone. Bring an open mind or prepare to have it blown. (Jagjaguwar)

Robin Hood Would Not Approve