Off the Grid Comes to Uptown Oakland

Even as some mobile food businesses transition to opening brick-and-mortar restaurants, the continued success of Off the Grid, noted organizer of massive food-truck gatherings in the Bay Area, offers convincing proof that the dining public has yet to tire of gourmet street food — at least as consumed while sitting on folding chairs in a tent-lined parking lot or street enclosure, surrounded by ten or twelve (or as many as 39!) trucks and a throng of fellow bao and fusion-taco lovers.

Now, Off the Grid founder Matt Cohen is looking to tap into one of the East Bay’s juiciest markets for food lovers — Uptown Oakland. Updating an initial report by Diablo Dish, Cohen confirmed that Off the Grid’s newest event will be located near the Fox Theater, on the stretch of William Street between Telegraph Avenue and Rashida Muhammad Street that’s adjacent to the Henry J. Kaiser Memorial Park. 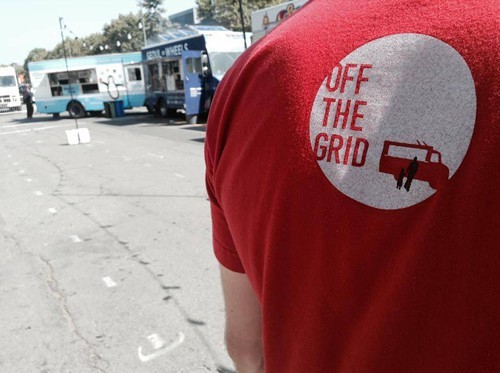 The new market will debut on Monday, July 14, from 5 to 9 p.m., and will take place every Monday night thereafter. A total of eight mobile food vendors will be on hand to hawk their wares the first week, and Cohen said there’s room at the site to expand to as many as ten.

When reached by phone, Cohen told What the Fork that he’s been interested in expanding to Uptown for quite some time, with the caveat that he wanted to be able to add something different — something that’s “not going to be cookie cutter” — to Uptown Oakland’s lively bar and restaurant scene.

“I think what we’re really trying to do is bring a sense of young Oakland music to that space,” Cohen said. Toward that end, Off the Grid will partner with neighboring businesses and organizations — including the Oakland Asian Cultural Center, Funky Soul Stop Records, and local schools — to bring live musical performances to the Henry J. Kaiser park each Monday, including some by student bands.

As for the food, one of the perks of the Monday-night time slot is that many of the food trucks that never make it to the other Oakland Off the Grid market on Friday nights — because they’re already committed to Off the Grid’s super-sized Fort Mason event — will be able to participate. The tentative lineup for next week’s debut includes Roderick’s BBQ, Doc’s of the Bay, El Porteño, Garden Creamery, Out of the Cave, WhipOut!, J-Shack, Frozen Kuhsterd, Ebbett’s Good to Go, and SAJJ Street Eats.

Although other Off the Grid events have occasionally been met with opposition from nearby brick-and-mortar restaurants, of which Uptown Oakland has no shortage, Cohen said he hopes that having the event on Monday nights — not traditionally a busy night for restaurants — will help mitigate that issue.

Off the Grid currently runs a whopping 34 weekly food truck events scattered throughout the Bay Area. The Uptown market will be the 35th.