When Brent Woodard was diagnosed with a gluten intolerance last spring, the thing he missed the most wasn’t pizza, beer, or spaghetti. No, what Woodard was most loath to give up was his morning routine: a cream-cheese topped bagel and a cup of coffee — “my idea of perfection,” he said.

Subsequently, the Oakland-based stay-at-home dad sampled every gluten-free bagel he could get his hands on, including those produced by established gluten-free bakeries like Udi’s and Oakland’s Mariposa Baking Company. But he found that all of the available options were subpar — not real bagels so much as vaguely bagel-shaped “bread rings” or dinner rolls with holes. So Woodard, a former IT specialist who had never before worked in the food business, got busy in the kitchen. By the fall, he had not only come up with a recipe for a gluten-free bagel that satisfied his own cravings, he’d also launched a new food startup, Odd Bagel, dedicated to bringing his creation to the masses. Now available at Berkeley Bowl West, Saul’s Restaurant and Delicatessen, the online marketplace Good Eggs, and a handful of other retail locations, Woodard’s bagels have slowly garnered a loyal following in the Bay Area’s gluten-free community. 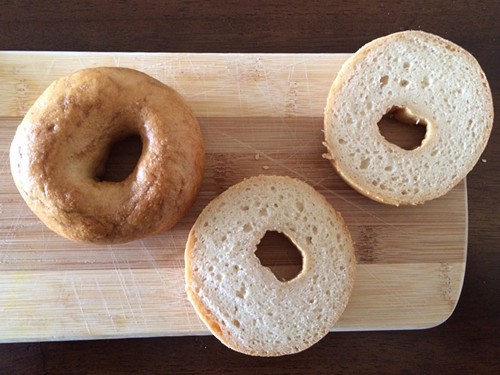 Woodard is convinced there isn’t a better gluten-free bagel product on the market. (He hesitates call them “bagels,” since in his view a bagel, by definition, contains wheat.) I’d even go a step further and say the bagels might be the best gluten-free bread products I’ve ever tasted — quite frankly better, and more bagel-like, than plenty of wheat-flour-based bagels.

The first thing you’ll notice about an Odd bagel is its small size (maybe four inches in diameter) and shiny, golden-brown exterior — both tell-tale signs of the proper East Coast style. The bagels have a yeasty aroma; a satisfyingly savory flavor; and, a dense, tightly packed crumb. They have a nice snap to the crust and are chewy as all get-out, to an extent that doesn’t seem possible from dough made with assorted rice flours, potato flour, tapioca starch, and xanthan gum. Most of the other gluten-free breads I’ve tried have a chalkiness to them and an off-putting mouthfeel, like the bread just kind of disintegrates in your mouth before you’ve have a chance to chew it properly. Not Woodard’s bagels, which have a heft to them and a texture that’s amazingly “bagel-y.”

I’ve written before that I can’t respect a bagel that can’t be enjoyed untoasted, and wholesale bagels — especially bagels purchased at a supermarket — are almost invariably too stale and dry to be palatable without a quick crisping in the toaster oven. Here’s where the Odd Bagel bagels surprised me the most: Even some twelve hours after I bought them, the bagels were nearly as tasty untoasted as toasted. 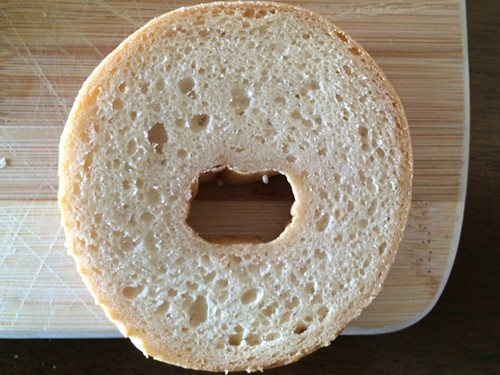 An added bonus: Unlike most gluten-free bagels, Odd Bagel’s recipe doesn’t include eggs, so the bagels are vegan in addition to being gluten-free.

Woodard, a self-described “project person,” said he developed his bagels through an iterative process that involved hundreds of slightly tweaked recipes and a focus group of gluten-intolerant bagel enthusiasts who would give extremely detailed feedback.

The main thing, Woodard said, is that he never wanted to settle for creating a product that only people with gluten allergies would want to eat: “I didn’t want it to be pegged as a gluten-free product because that’s a kiss of death.” His hope was that a family with only one gluten-intolerant member might buy a bunch of bagels that everyone could enjoy, and that no one would feel short-changed.

That, Woodard said, is where he feels most successful. “I solved a problem for people,” he said. “No one’s having to do without, or have to make do with a lesser product.”

Woodard boils and bakes his bagels — about ten dozen a day, presently — at the Uptown Kitchen commercial kitchen. The bagels cost between $1.50 and $2 each. I bought mine for $1.79 at Berkeley Bowl.