At the Grand Avenue eatery, the Cal-Italian chef experiments with preserved lemons, fish sauce, and even an immersion circulator. 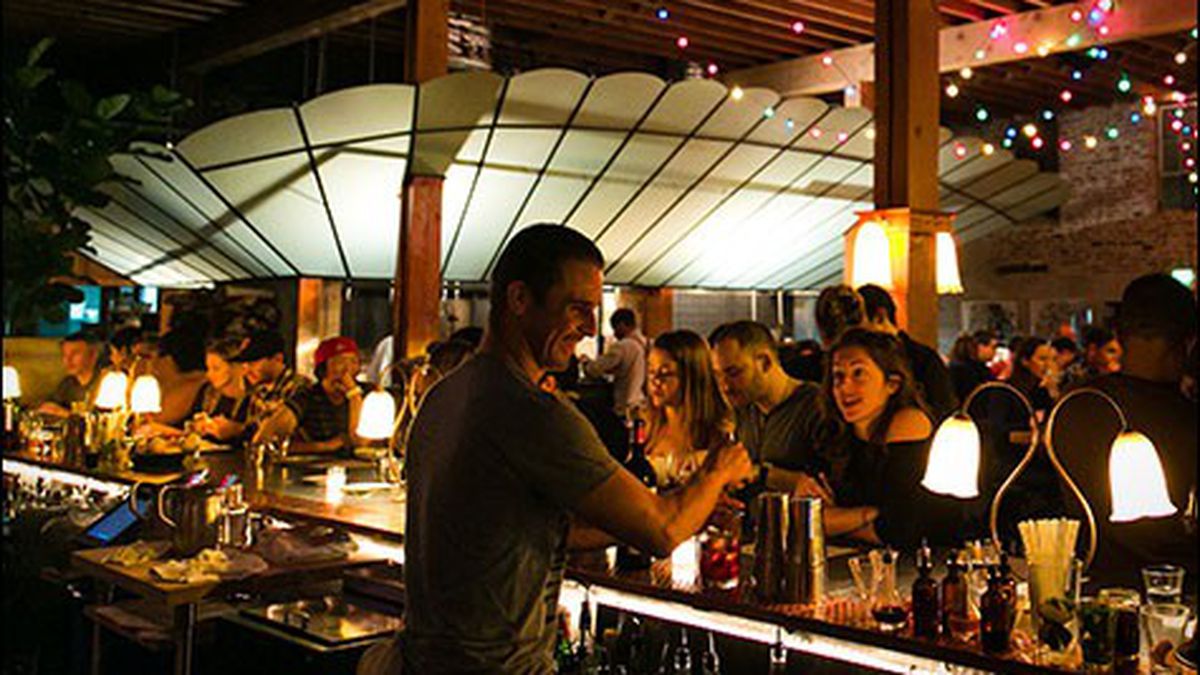 Any conversation about Charlie Hallowell’s new restaurant, Penrose, should probably start with the design, which is, in a word, beautiful. The place oozes with money and Old World charm — from the molded-plastic Eames dining chairs to the whimsical blown-glass light fixtures. (Even the restaurant’s upstairs office, briefly illuminated one night, looked, from afar, to be as well appointed as Jay Gatsby’s library.)

The most prominent feature is the back-lit glass awning that juts out over the open kitchen. Inspired by the fan-shaped art-nouveau awnings you’d find above old Paris Metro stations, the scalloped glass provides an eye-catching frame for the restaurant’s red-hot, flickering heart: an enormous wood fireplace equipped with three big grills, where most of the food is cooked. There aren’t many restaurants that make a more dramatic impression.

Penrose is loud and buzzy and over-the-top, and the food — mostly small plates, with a focus on meats and vegetables grilled in that fireplace — straddles the line between bold flavors and an “elemental” simplicity. Hallowell said he wanted the restaurant to be “rowdy” — the kind of place you take “the hot girl from New York whose pants you want to get into” out to when she comes into town.

For Hallowell, who recently turned forty, Penrose marks a step in a new direction, culinarily speaking. His first two restaurants, Pizzaiolo and Boot and Shoe Service, fell squarely in the chef’s rustic Cal-Italian wheelhouse. Penrose, on the other hand, was inspired by its namesake, Hallowell’s great-great-great-grandfather, Penrose Hallowell, a Quaker abolitionist who, as the son of a “Black Irish” immigrant, may have traced some of his heritage back to the Moors. Perhaps because of that connection, Hallowell said he’s always loved the cuisines with Moorish roots — Sicilian, Andalusian, but also North African. At Pizzaiolo, he’d occasionally serve a chickpea ragu or Moroccan-style flatbread, but he always felt like he was holding back.

So Hallowell decided that at Penrose there wouldn’t be any hard-and-fast rules. The menu skews heavily toward North African and Middle Eastern flavor profiles — lots of preserved lemon, yogurt sauce, and cilantro. But occasionally there are also Japanese-inspired dishes, dishes spiked with fish sauce, and more typically Cal-Italian dishes. There aren’t clear distinctions between appetizers and entrées, and the food comes out in no particular order. Hallowell, a self-described Luddite, said he’s even bought an immersion circulator (!), which he uses to slow-cook eggs.

Some of the best dishes have a rollicking, improvised quality. A wedge of fluffy grilled polenta came topped with pork ragu — a generous heap of juicy, fatty, slow-cooked goodness, as soulful as anything an Italian grandmother might make. Hallowell said he imagined the dish as a North African take on Mexican pozole, a little pool of chermoula (a cilantro-based sauce) cutting into the richness. For another small plate, chickpea fritters were slathered with a cool beet yogurt; the inclusion of whole, as well as mashed, chickpeas added textural interest.

In Hallowell’s vision of “elemental” cooking, each plate of food highlights its main ingredient; garnishes and side starches are kept to a minimum. Nothing could be simpler, or more perfectly executed, than the grilled skirt steak with brightly acidic chimichurri sauce at Penrose. Likewise, the ingredients spoke for themselves in a plate of sweet Berber carrots (roasted whole until wrinkly and just-tender) and feta cheese.

Most of my complaints, especially during an initial, somewhat uneven dinner, had to do with value rather than execution. The lamb kefta skewers were delicious, with a nicely charred outer crust — but in what world is $20 an acceptable price for three small meatballs? And I loved a dish of roasted cauliflower with pine nuts, raisins, and preserved lemon. But $10 seemed steep for the portion. My main issue with a whole grilled sardine was one of practicality: The restaurant was too dimly lit for me to enjoy picking through such a bony fish.

The one constant on the daily-changing menu is beef or lamb tartare. If the lamb is available, just order it, no questions asked. In the version I tried, the lamb was bright red and coarsely chopped, and the fruity brininess of Castelvetrano olives was a nice counterpoint, as were the little cubes of pithy Meyer lemon rind, which added a layer of citrusy bitterness and complexity. Nothing overshadowed the meat, which was tender, clean-tasting, almost sweet.

The only thing that would make the dish better is if Hallowell served it not with toasted baguette slices but with wedges of the restaurant’s flatbread, which, tinged with olive oil and smoky from the wood fire, was fabulous. Since we’re on this journey to North Africa, why not take us all the way there? We’d ordered some flatbread for the table, and the combination was killer.

As it turned out, during the two weeks that passed between my two visits, Hallowell fired the restaurant’s opening chef, Miles Schaefer, and took over the kitchen himself. As the restaurant heads into its second month, it seems that Hallowell has fixed, or at least begun to fix, the handful of quibbles I had: The lights had been turned brighter, resulting in a more practical dining ambience. The menu featured a few more substantial dishes in the $14-to-$16 range, plus some $4 bar snacks, the upshot of which was that it was easier to cobble together a reasonably priced meal. And the food, on the whole, was just tastier and more generously portioned.

It’s the first time a new restaurant I’ve reviewed has changed chefs between visits, but maybe that’s fitting. Penrose is Hallowell’s baby. As long as he’s the one writing each night’s menu, I’ll want to go back to see what he’s cooking.