Plus, a new kind of food delivery service, and a snack market for stoners. 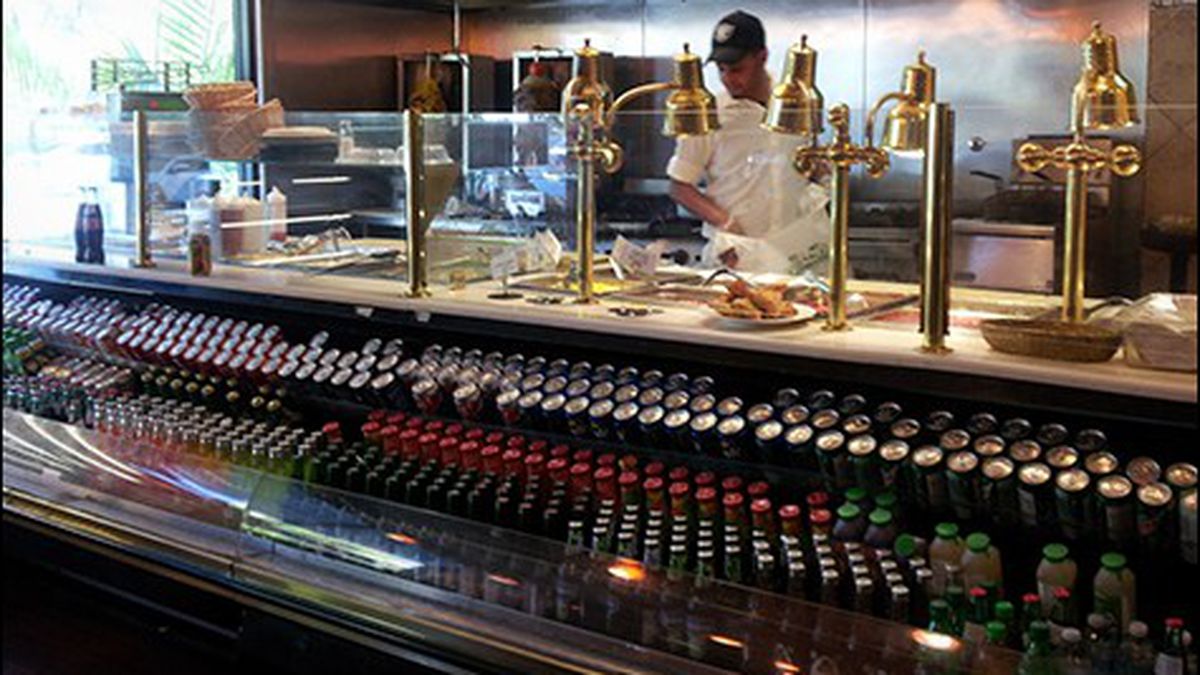 In the four years since it opened, the Oasis Food Market (3045 Telegraph Ave., Oakland) has, true to its name, functioned as a home away from home for the area’s Middle Eastern community — and anyone else who has an abiding love for lamb shawarma, baklava, and hard-to-find Middle Eastern spices sold in bulk.

Now, the folks who own the popular cafe/grocery store/halal butcher shop are about to open a second restaurant in Oakland, this time in the Adams Point neighborhood. Oasis Lounge (344 Grand Ave.) will be located in the same building as the Lake Merritt Supermarket convenience store, which shares owners with Oasis Food Market. And while the original Oasis is mostly known as an ethnic food market that happens to have an excellent takeout counter, Oasis Lounge will be a full-service sit-down restaurant and hookah lounge — a place where customers can have a nice dinner and, if they feel so inclined, indulge in the smoking of vaporized flavored tobacco (or shisha).

According to Oasis co-owner Mohsin Sharif, who is overseeing the new project, the two-story space will seat a total of sixty, between the main indoor dining room and two outdoor patios — the back patio will serve as the hookah lounge area. Meanwhile, the food won’t be strictly Middle Eastern, but rather a mix of different Mediterranean cuisines, Sharif said. The chef, Eric Lanvart, has a background primarily in French cuisine, but he’s also had experience cooking Moroccan, Turkish, and Lebanese dishes. And so while Oasis Lounge will definitely serve things like falafels, hummus, and couscous, there will also be a variety of seafood and pasta dishes on the menu. Oasis Food Market will supply all of the desserts, including its house-made baklava.

Sharif estimated that Oasis Lounge will open by mid-October. The tentative hours will be from 11 a.m. to midnight daily.

These days it seems like every couple of weeks there’s a new contender in the increasingly competitive dinner-delivery-service market in the Bay Area, as fledgling startups vie for the hearts, minds, pocketbooks, and stomachs of busy office workers. There is, for instance, a company that promises to deliver a hot meal to your door less than ten minutes after you’ve placed the order on your smartphone. Other companies function essentially as middlemen, allowing customers to place takeout orders from a carefully curated list of restaurants, and then charge a flat rate to deliver the goods.

Touting itself as “your solution to the weekday dinner dash,” The Quick Cook, which launched in downtown Oakland last week, takes a slightly different approach. After customers order their meals at TheQuickCook.com, the company will deliver the food straight to their office building, where it will sit inside a refrigerated delivery kiosk — something like a vending machine, except each customer will have his or her own personal digital lock box inside — until the customer picks it up. Each microwave-ready meal is cooked fresh that same day, using mostly local and organic ingredients, at a commercial kitchen in West Berkeley (the recently launched Berkeley Kitchens). And because the meals are delivered fully cooked and refrigerated, The Quick Cook is able to avoid charging sales tax — presumably because the foods are treated as groceries rather than restaurant purchases. Recent offerings include grilled glazed salmon with apricot couscous and a crusted “shells ‘n cheese” dish that was served with steamed broccoli.

There are some potential drawbacks to the service. For starters, Quick Cook meals are currently only available if your office has one of those proprietary delivery kiosks. Right now, those are limited to two buildings in downtown Oakland (2101 Webster Street and 2100 Franklin Street), and in general it appears to be the kind of thing that makes more sense for a big office building that houses many different companies. Of course, The Quick Cook’s business model seems predicated on adding additional kiosks, and eventually the company will offer delivery to selected kiosk-less buildings for an additional fee.

More to the point, with meals starting at about $20 each (for a two-serving portion, which is the smallest available size), you’re talking about prices comparable to what you’d pay to eat at a mid-range sit-down restaurant. That’s a lot for a meal that you heat in the microwave — especially since it’s unclear from the website whether the two-serving portion is really enough food to serve as a complete dinner for two people.

What the Fork reached out to The Quick Cook hoping to obtain additional information, but we were told, via email, that the company policy is “to not grant interviews regarding [its] business practices.”

The Uptown Oakland jazz venue Sound Room (2147 Broadway) and its affiliated commercial incubator kitchen The Uptown Kitchen will be hosting a special First Friday artisan food market this Friday, October 4, from 7-10 p.m. This month’s theme? Food made for stoners. Gourmet food items geared toward customers who have a serious case of the munchies will include grilled cheese sandwiches made by the Grilled Cheese Guy, stoner ice cream (bacon, chocolate, and peanut butter flavors) by Kim Byers, and what organizer Maricela Yee describes as “cotton candy on steroids” from Sugar & Spun. There’s no cover charge, and the Oakland Symphony Chorus will be on hand performing showtunes.