A newly released survey also reveals a divide within the department between an old guard resistant to change and new officers who want OPD to become a modern, progressive police force. 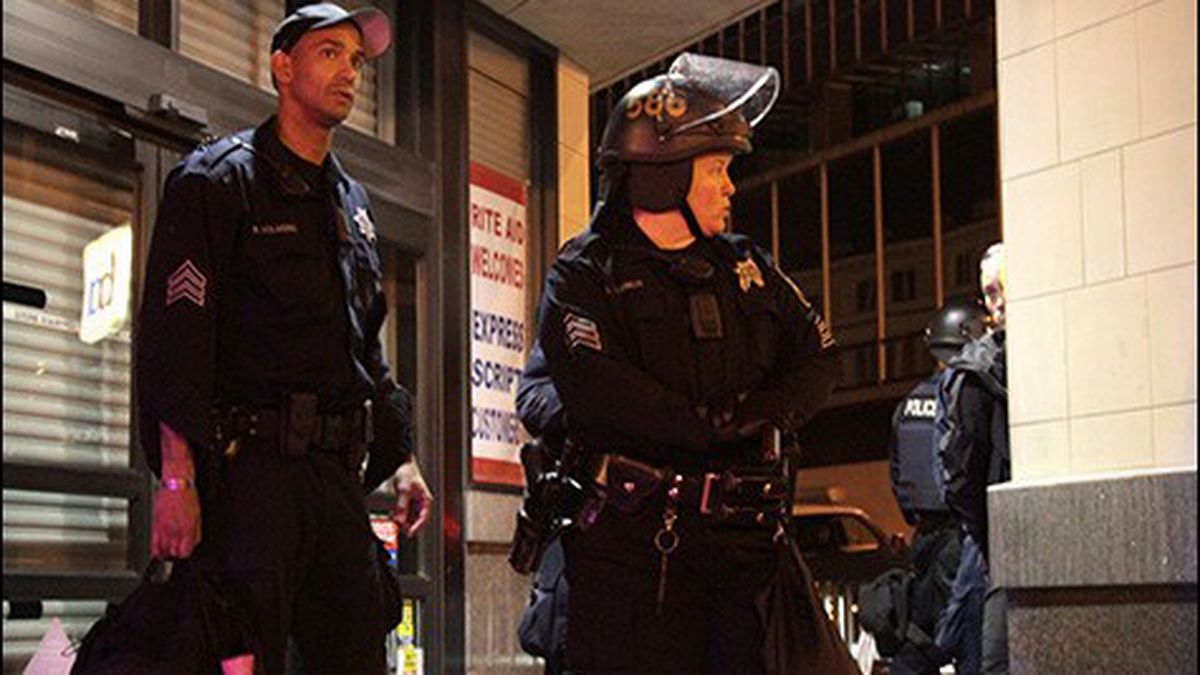 An internal survey of Oakland police officers reveals a deep disconnect between rank-and-file cops and the city they serve. Many officers said they do not trust the city’s elected leaders and think they are too “liberal.” A majority of city cops also complain that Oakland residents don’t appreciate them. And officers think that department brass and city leadership are too focused on eradicating police misconduct and implementing court-mandated reforms. In addition, the survey reveals a stark division within the department between an old guard that is resistant to change and new officers who want OPD to become a modern, progressive police force.

The survey, which was conducted last fall, also paints a portrait of a police force that is plagued by low morale, distrust at all levels, and a lack of basic equipment and staff. The survey results also show that the department’s patrol cops feel unfairly targeted by commanders for discipline and for what they view as unfair Internal Affairs investigations. Cops speak of a “culture of fear” that pervades the agency — fear of making mistakes and being “persecuted.” We obtained the survey’s results through a California Public Records Act request.

Perhaps most shocking are the survey’s raw results: 65 percent of OPD’s sworn officers reported not feeling valued by the department for the work they do. In addition, 55 percent of officers said they do not “feel valued by the citizens” of Oakland. And most Oakland cops have little faith in their own commanders. One survey question asked, “Do you believe commanders/managers treat members/employees fairly in the organization?” 64 percent of Oakland’s cops responded “no.”

More than half of the city’s police officers also do not believe “that hard work and good work performance helps one get ahead,” within OPD, and some officers say that the agency has become the “laughing stock” of law enforcement agencies.

Mayor Jean Quan and the city council received the lowest vote of confidence from OPD’s officers. A whopping 84 percent of cops said they do not feel valued by the rest of Oakland city government. Echoing a line often used by the Oakland police union, one officer pushed for the council to give the police department greater leeway in running its day-to-day affairs: “Insulate employees from constant political turmoil and external pressures. City and Department need to stop rolling over for whoever screams the loudest at city council meetings. This City is hamstrung by political correctness and failed liberal agendas.”

Another officer called the city council “crazy liberal.” The same officer opined that cops accused of disrespectful conduct in the field were simply reflecting the nature of their working conditions: “The Department expects officers to treat citizens with respect, but when you look [at] the working conditions at OPD it is understandable. The building is gross. There is no equipment ….”

Few respondents had kind words for OPD’s leadership. Common complaints centered on discipline. Many officers claimed that commanders use the requirements of the federal consent decree to shirk responsibility and arbitrarily punish subordinates.

“The general perception is that the command has been sacrificing officers to appease the monitors and the federal judge,” one officer wrote. “Bringing policy change that will not hamstring the officer from doing their job for fear of reprisal from command would be the greatest incentive the department could offer.”

Other Oakland cops believe that the federal consent decree — which was instituted in 2003 following a police misconduct scandal involving rogue cops known as The Riders — has resulted in a drive by internal affairs to discipline officers in order to appease US District Judge Thelton Henderson and his appointees. The officers think such actions reduce OPD’s effectiveness in combating crime. One officer wrote that command staffers “only think about themselves and their survival,” and that they “stand in the shadows when things get tough.”

“One of my main issues with this department is that it seems like the department’s main goal is to get into compliance and not to fight crime,” wrote one officer. “It appears as if the department is on a manhunt to get their personnel into trouble.”

Police officers’ frustration with the federal consent decree — and the department’s alleged over-emphasis of it — comes in stark contrast to a recent critical report from Independent Court Monitor Robert Warshaw, a former police chief from Rochester, New York, who is monitoring the department’s compliance with the consent decree. Warshaw’s newest report, released last week, found that OPD had taken a step backward in its attempts to implement the decree’s mandated reforms. Warshaw also found that police officers continue to not use their chest-mounted cameras, which are supposed to record interactions with the public to ensure that cops are not mistreating citizens or violating the law. Warshaw’s team discovered that three officers under review for multiple misconduct allegations turned their cameras in for repairs and resumed patrolling city streets for weeks without replacement units.

Several cops also stated that they should be allowed to use the chest-mounted cameras per their own discretion — and some even called for getting rid of the devices. Department policy mandates that officers turn on their cameras whenever they’re interacting with the public.

Some survey respondents also pointed to a divide within the department between an old guard and newer officers who want the department to fully implement the consent decree. “The Police Department is divided between a group of people trying to move the police department forward into a progressive and modern police force and those holding on to old times, old ways, and a good old boys club,” wrote one officer. Another officer complained that he or she is “tired of the discrimination, cliques, unprofessionalism and the lies that is being facilitated” by some of the department’s leadership.

Rashidah Grinage, executive director of the police watchdog group PUEBLO, said she has been in contact with former OPD officers who confirmed the internal split within OPD. “There’s this group of insiders who basically control everything, and if you’re on their good side you get protected, but if you’re on the outside, you get hung out to dry,” she said.

When asked what the department could do to encourage officers to stay with OPD, rather than exiting for other police agencies, as many new hires do after several years with Oakland, one officer wrote: “Eliminate ‘old boy network’ whereby individuals are placed in supervisory/commander positions without being on promotion lists.”

“The department is, indeed, bogged down by an old guard, a hard-core of officers who don’t want to change and don’t care about the millions of dollars in settlements that the people of Oakland, not them, are paying,” said attorney Jim Chanin, referring to legal settlements the city has paid out over the years because of police misconduct cases. Chanin has worked on OPD’s federal oversight with Oakland civil rights attorney John Burris since they filed The Riders civil suit in the late 1990s.

Other major complaints voiced by many Oakland cops in the survey involve the department’s stressful working conditions, lack of adequate equipment, and mandatory overtime. “We are living in Section 8 housing, driving 905 cars and talking on broken radios, writing reports into a system that doesn’t work — wow the place is completely broken,” wrote one officer. In police lingo, “905 cars” refer to broken-down or abandoned vehicles. Numerous officers wrote that the department badly needs to upgrade its radios.

Multiple officers who responded to the survey brought up the issue of suicides. Last summer, OPD officers William Burke and Porter Weston killed themselves. The department’s patrol cops said this was due to the incredible stress of their jobs, and utter lack of leadership from the department’s commanders and the city’s politicians.

In response to a question about improving the daily working environment, one officer pointed to the toll exacted by mandatory overtime shifts necessitated by political protests in the city or backfilling empty beats. “Eliminate the mandatory overtime,” the officer wrote. “We are under constant serious stress on the daily basis even for our regular 40 hour shifts. In addition, we are often extended well pass this and it is having a toll on officers’ mental well-being. It appears the city is ignoring the obvious spike in officer suicides and it is alarming that no comparison to the overwhelming work load officers have been assigned.”

OPD spokesperson Officer Johnna Watson said the department is currently in the process of creating a “wellness unit” to help create “a healthy working environment for officers.” She said the unit is currently “a work in progress.”

Though the Oakland police union did not return repeated requests for comment about the survey and its results, rank-and-file cops feel that the quality of internal affairs investigations is reflected in the results of recent labor arbitration decisions. The City of Oakland has lost five of the last eleven arbitration cases in which the department sought to discipline officers, and in four cases of the last eleven cases, the arbitrator reduced the punishment sought by the police department. In a case involving officer Wenceslao Garcia, the arbitrator said that Assistant Police Chief Paul Figueroa had issues with “truthfulness,” a phrase that appears to have been noted in an anonymous officer’s response to the survey: “Leadership should not be made up of people who have documented (in binding arbitration sessions as well as the court system) truthfulness issues, attempting to coerce others to change findings of investigations, and a myriad of other indicators of poor character.”

Watson said the department was also implementing a number of changes aimed at addressing officers’ concerns, including adding staff to the crime lab, hiring more police service technicians, running two academy classes with 100-plus officers being training, and adding more training for sworn and civilian staff.

Correction: The original version of this story misstated the number of arbitration cases lost by the City of Oakland. In the last eleven cases, the city lost five of them, and the arbitrator reduced the punishment sought by the city in four other of the eleven cases.