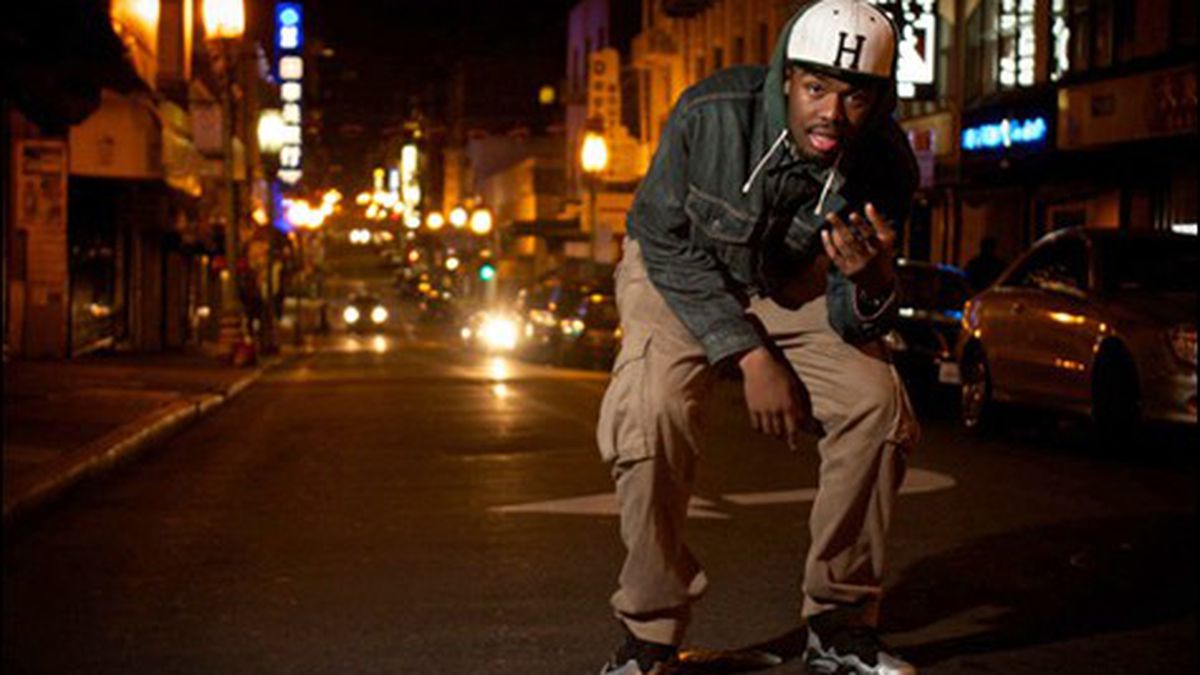 Nowhere to Go but “Up”

IamSu is the auteur behind the hottest local rap song on KMEL. So why isn't he signed?

It could have been mere happenstance that I heard IamSu!’s now-ubiquitous rap song “Up” blaring from multiple car stereos during the half-hour drive to meet him in Pinole. More likely, it was testament to the song’s mammoth popularity. Now playing in heavy rotation on the Bay Area’s two dominant hip-hop stations, KMEL and WiLD 94.9, it’s become sonic wallpaper in IamSu!’s hometown of Richmond, a staple at clubs in Oakland, and a regular presence at the intersection of Adeline Street and San Pablo Avenue in Emeryville, where one driver swayed jerkily with his arms pinned behind his seatbelt. It came on the radio once during the drive from Oakland to Pinole, and twice during a traffic jam on the way back. It’s currently playing on radio stations nationwide.

That’s a coup for a local artist who came up without major-label backing, especially at a time when Bay Area hip-hop seems largely on the decline. Now 22, IamSu! — whose real name is Sudan Williams — began rapping as a student at Pinole Valley High School, where he also played basketball. He learned to make beats at Youth Radio, an Oakland organization that has won several prestigious awards (including a Peabody for investigative reporting), but has also become an improbable incubator for aspiring hip-hop artists. IamSu! says he learned to make beats under the tutelage of another local auteur, Trackademicks (né Jason Valerio). He eventually pulled together a dozen or so friends to form their own crew, called The Heart Break Kids — or HBK, as it’s better known. Within a few years, the group would dominate Bay Area hip-hop.

In some ways, that’s tantamount to being a big fish in a small, increasingly brackish pond. As we found out by watching the well-intentioned but ill-fated hyphy movement, the Bay Area has never really been an epicenter for rap music. It’s not home to major labels, it doesn’t have industry cachet, and its two dominant hip-hop stations — both owned by Clear Channel — don’t burden themselves with being local arts boosters. That meant the members of HBK had to go it alone. As teens, they learned to make beats on FruityLoops software, write their own hooks, and market themselves without any promotional armature. Not for nothing was IamSu!’s first-ever rap crew called “The Go Gettaz.”

Sitting outside a Pinole Fosters Freeze on a recent afternoon, they were seven strong (though there are apparently five additional members, plus a couple adjunct rap crews) but characterized their operation as lean and ascetic. The role of most members remains unclear — one described himself as HBK’s “court jester”; another said he does interpretive sign language. In IamSu!’s words, things started “organically” about three years ago, when a few core members — rappers IamSu!, P-Lo, and Skipper, singer Rossi, and producer Kool John — began meeting after school to write verses at a local Burger King. They got by using minimal technology. To illustrate, IamSu! pulled out his iPhone — a 3G model in a pink case — and opened the Notes app. A list of files appeared on the screen, with names of rap songs typed out in tidy Marker Felt font. It contained his entire oeuvre. He said the iPhone is still his primary piece of gear.

The son of an elementary school teacher with a bohemian sensibility — he says she’s prone to use phrases like “positive vibes” — IamSu! generally subscribes to the credo that less is more, and he’s successfully applied it to hip-hop. The trick, he said, is to keep your operational costs low and your office portable. During high school, IamSu! released a whole spate of mixtapes and emailed them to local DJs, including Adam Giacomini — better known as DJ Amen — a rail-thin, narrow-faced, disarmingly affable KMEL mix-show host, who became the young rapper’s de facto enabler. Amen broke a couple of IamSu!’s early tracks on an after-hours segment called “Damn It’s Late,” which runs from 2 to 4 a.m. on Saturday mornings. Then nineteen, IamSu! had produced a few decent AutoTune-laden R&B songs, a small collection of freestyles, and a lascivious, sing-songy rap called “I Know What to Do With It.” The latter was his first concerted attempt to mollify a pop audience. It sampled a loop from Drake’s “The Night Off,” purloined a few lines from Kanye West’s “Slow Jamz,” and sounded good enough, overall, to land IamSu! on The Bay Area Freshman 10, a talent showcase that Amen launched in 2010 to promote local talent. Although his lyrics were still a bit crude (Sample line: I’m going down, Mary/Makin your girl scream so loud, scary), the song showed promise. Or, as Amen put it charitably, “I thought he had room to grow.”

But Amen didn’t cotton so easily to IamSu!’s actual first hit, which is understandable. “Up” is shorthand for “Beat the Pussy Up,” which is rather alarming subject matter for a group of high school-age emcees. (At nineteen, IamSu! was considered the elder statesman.) “I don’t think that [song] was appealing to anybody except teenage boys when it came out,” Amen said, adding that he also wasn’t enamored of the song’s threadbare structure: It relies on two simple chord voicings repeated over and over, though all you really hear are the two top notes. Not what you’d call an intricate piece of orchestration.

IamSu! and his co-writer, another young emcee named LoveRance, saw the song’s potential. They put it on a flash drive, carried it around in their pockets, and foisted it on every club DJ who crossed their path. If the club had working microphones, LoveRance would grab one and start rapping over the track. Pretty soon the song had enough buzz to get them onstage at chichi venues like 330 Ritch, where they caught the attention of KMEL music director Big Von. He started playing “Up” on his afternoon program, which has a much wider audience than any late-night mix show. “Von is really the powerhouse who breaks records and puts them on the marketplace,” Amen said. “I just help bring stuff to the table.”

Within a couple months, “Up” was airing multiple times a day on KMEL — often enough, in fact, that IamSu! learned to switch the radio station in his mother’s car at exactly 8:25 a.m. every morning, so she wouldn’t hear her son rapping about female ejaculation. (Eventually, it was unavoidable, he said — “my mom was crazy upset.”) LoveRance, who was a decidedly less-talented rapper but who was credited as a songwriter of “Up” on an early mixtape, got his own place on Bay Area Freshman Top 10 in 2011 — the same year that Kreayshawn was added as an honorable mention. Later that year, he inked a deal with Interscope.

Ironically, though, IamSu! is the group’s more obvious frontman. He has the first verse on “Up”; he’s the more nimble rapper; he’s got a raspier, hookier vocal timbre; he wrote the beat. Moreover, he’s unassailably handsome — more than six feet tall with saucer eyes and near-perfect facial geometry — he just looks like someone who should have a record deal. But so far, he’s fallen behind his more market-savvy peers. IamSu! said that’s a conscious choice. “It was just a decision I made because I didn’t want to come out on that note,” he assured, insinuating that the image LoveRance cultivated for himself is a little too prurient, a little too adolescent, and probably a little too insipid to have real staying power.

Not that IamSu!’s solo material is a huge departure: He lards them with boasts and bawdy punchlines, and his latest claim to fame, a cameo on E-40’s song “Function,” is all about a booty call. That said, he’s also shown more sophistication on songs that probably won’t make it to radio. His new mixtape, KILT, sounds colder and sharper, with a lot of minor-key hooks and raps delivered in double-time. Some of them are dismal: On “Over,” IamSu! scolds listeners for their political apathy. People need medicine, and people is hungry/But we don’t do shit about it, and that’s how it’s gon’ be, he laments.

To date, IamSu! has released ten mixtapes — five in the last three years — guest-starred on three radio hits, and penned hooks for many of his more-famous peers. Although he has yet to release an album, and is one year away from finishing an ethnic studies or communications degree at Cal State East Bay, there’s a huge promotional machine behind the emcee, and many regard him as a new savior for Bay Area hip-hop.

That’s a tall order, but one that IamSu! might be capable of filling without the support of a record label. After all, he’s already discovered the holy grail of hip-hop: Make a song with zero production values, saturate it with male ego, and parlay it for local notoriety. Or, in this case: Put a cache of verses on an iPhone, and use them to commander the airwaves.

Oakland May Have to Favor the Raiders Over the A’s