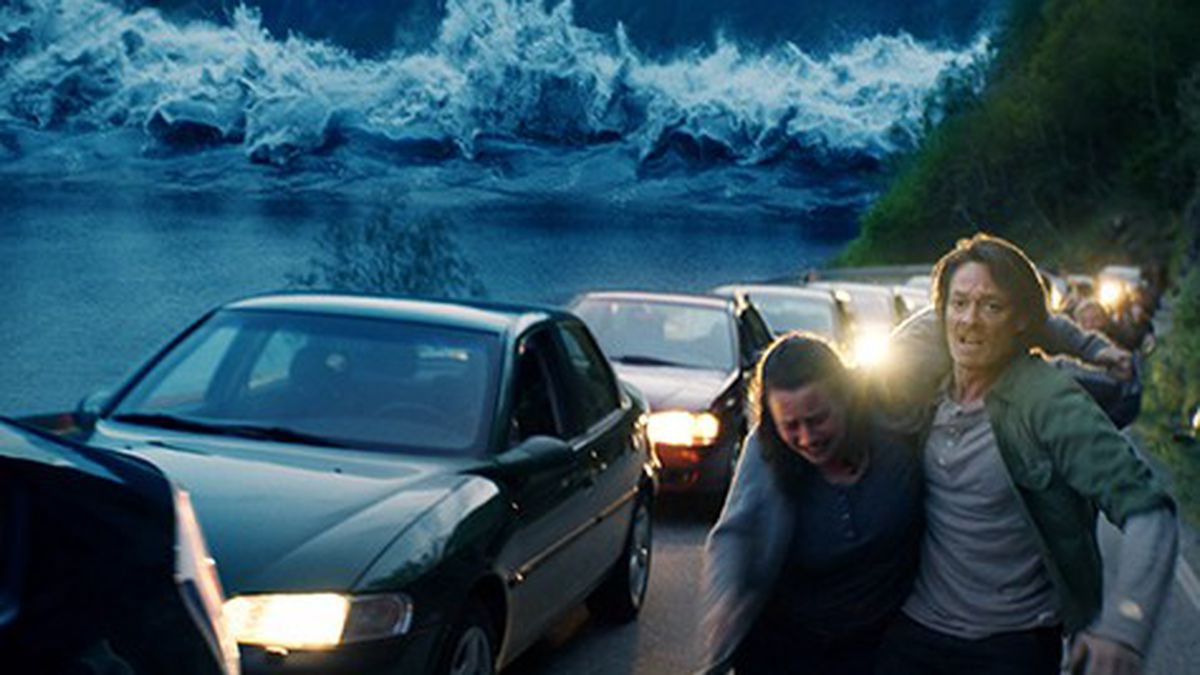 Make their own disaster flick, The Wave.

Disaster flicks? In Norway? Even though that Scandinavian country (population: about 5 million) is best known by the average American moviegoer as a place where tall, blond people enjoy winter sports and pickled herring, the producers of The Wave want us to know that another Norwegian cliché, the ever-popular fjord, has the potential to scare audiences. How is that, you may ask? By crumbling apart, sending thousands of tons of rock hurtling into the fjord’s waters to create a massive, eighty-meter-high tsunami — at the height of the tourist season; despite the nervous apprehension of a conscientious scientist (played by Kristoffer Joner); when one of the other scientists is looking away from his monitor. Short answer: Epic destruction usually sell tickets.

Turns out there are more than three hundred unstable mountainsides in the picturesque Norwegian topography. Geologists like Kristian Eikjord (actor Joner) are well aware of the threat, and the country has in place a system of rock-stabilization structures, electronic devices, and emergency plans to cope with the destruction when — not if — a ginormous mountain like Åkerneset should finally lose its battle with gravity and crash down, in this case on unsuspecting vacationers near the scenic Western Norwegian town of Geiranger.

Kristian, his wife Idun (Ane Dahl Torp), and their two children are separated from each other when The Big One hits. Unlike the majority of H’wood disaster pics, we don’t get a roundelay of otherwise disconnected characters suddenly brought together by the cataclysm. It’s just Kristian, Idun — at her job in a resort hotel along with their skateboarding teenage son — and their little girl, running with the rest for high ground as the hellacious CGI (but careful, convincing CGI, it should be noted) wave bears down from across the Geirangerfjord, sweeping all before it. They have ten minutes to reach higher elevation or else be put into the rinse cycle with cars, cows, and other screaming folks, à la The Impossible, the film about the 2004 Indian Ocean tsunami.

Let’s take a moment to appreciate director Roar Uthaug. What a wonderful name for the maker of a movie about falling mountains. Roar. Using handheld cameras for maximum spontaneity, he herds the huge disaster into a tight frame whenever possible, moving from sweeping vistas of raging inlets to such confined spaces as a hotel basement emergency shelter quickly filling up with water, in order to bring a monumental catastrophe into close, personal focus. Sturdy actor Joner — the archetypal long-haired, stoner-looking Euro scientist — gives worried family man Kristian the same cool, level-headed, understated heroism we demand from any disaster survivor. Opposing him, in addition to the unstoppable force of nature, is the plainly presented reluctance of the authorities to unduly alarm everyone about a looming catastrophe the government has been expecting for years. Their reason: No one wants to hurt the tourism business, which is now in peak season.

One of the best things about filmmaker Uthaug’s relatively modest environmental horror story — Norway’s first disaster movie, as well as one of its most-expensive-ever film productions — is that its telescoped field of interest eliminates one of the genre’s corniest devices, the question of who makes it and who doesn’t. When the situation eventually boils down to an underwater rescue, as in The Poseidon Adventure, there isn’t any Shelley Winters to cheer for, nor an Ernest Borgnine to hiss at. Just the little family, give or take an unrelated hapless floater or two, gasping for air in a claustrophobic death trap. What could be cozier?

The old-style Seventies disaster-mobile was notorious for inflating its cast in order to provide work for low-priced, forgotten Tinseltown actors. The advantage of setting a disaster movie in Norway is that all the actors are unknown in the first place. In the midst of staging an enormous natural sorting-out, The Wave puts its stress on the human-scale dimensions of staying alive. That’s reassuring. It was either going to be that or giant killer sardines.