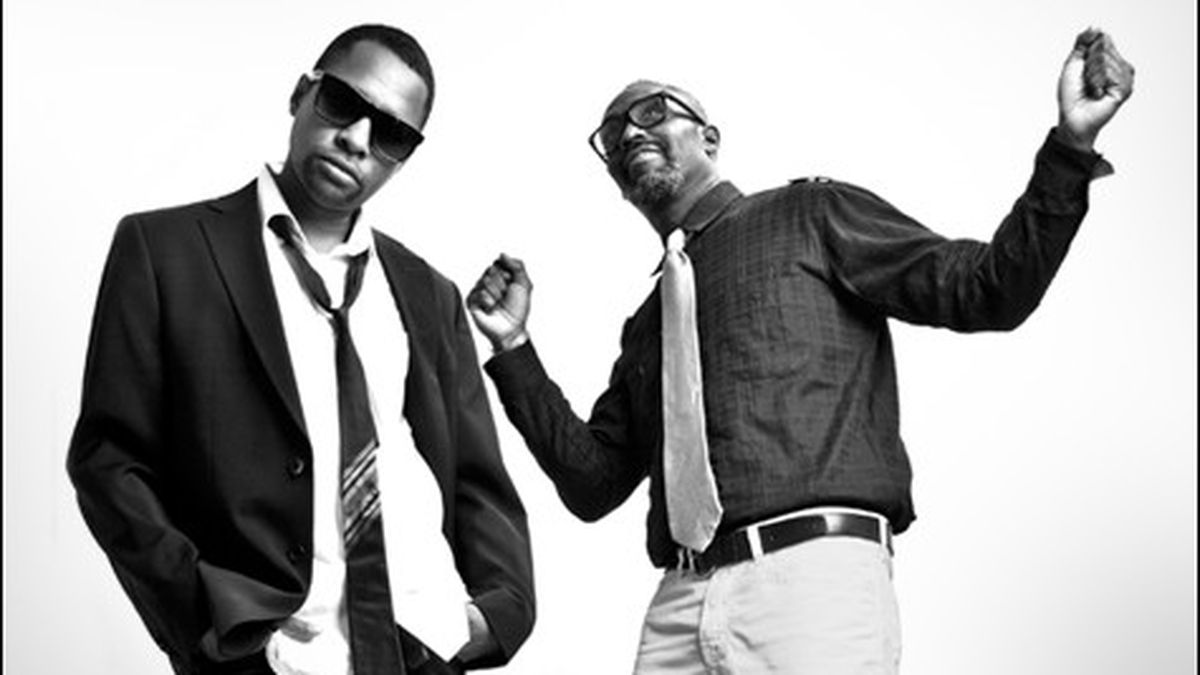 Eric Cooke and Myron Glasper met in the hip-hop group Blackalicious, but draw from obscure Sixties soul for their new project Myron & E.

When DJs in England who specialize in obscure old-school soul records first heard Myron & E’s 2008 debut seven-inch, “Cold Game/I Can’t Let You Get Away,” many mistook it for something that had been recorded decades earlier. So did Chicano DJs in San Jose who spin little-known, sweet-soul oldies at low-rider car shows and other events, explained Eric “E da Boss” Cooke, one half of Myron & E.

The record’s two songs certainly sound as if they’d come from an earlier era, right down to Myron Glasper and E’s unpolished yet plaintive vocals, a slightly-out-of-tune string section, and the record’s somewhat lo-fi sound quality. The tracks are not unlike a Natural Four record, Whispers’ singles on Soul Clock before the company moved from Berkeley to Los Angeles, or one of countless other indie releases from throughout the United States during the Sixties.

The record was initially issued by the Timmon label in Finland, then licensed for release in North America by Now-Again Records in Los Angeles.

“Everybody Timmon sent it to thought that the label had found a master tape from back in the Sixties,” said Cooke, a DJ who has been producing hip-hop records as E da Boss for the past thirteen years. “A ton of people didn’t know that it was brand-new music.”

The rhythm tracks for the single were actually recorded in 2008 in Helsinki by the retro-soul band The Soul Investigators (also on the Timmon label) in a studio that uses vintage equipment patterned after Motown’s legendary Sixties setup. The two singers — friends since they began touring with the Sacramento hip-hop group Blackalicious (Glasper as a backup singer, Cooke as a DJ) — wrote lyrics and melodies to the tracks the Finnish musicians had sent them, and then recorded their vocals in the bedroom of Cooke’s Oakland apartment using Pro Tools. Strings were added in Helsinki, and, after mixing and mastering, three hundred 45s were manufactured in Germany — one at a time, using an old-fashioned hand press. Another 2,000 or so copies were pressed as demand grew.

The two tunes are included on Myron & E’s debut album, Broadway, just released on Stones Throw Records, an LA label run by DJ Peanut Butter Wolf. The eight other songs, all collaborations by the singers and The Soul Investigators, were mostly recorded in Finland during 2009 and 2010 visits by Glasper and Cooke. A video for “I Gave You My Love,” a sweet-soul ballad from the album, was shot recently during a low-rider dance at the Veterans of Foreign Wars Hall in the City of Industry with the two men lip-syncing their parts. They will perform it, and other numbers from the album, when they play The Legionnaire Saloon on Saturday, July 13, backed by their six-piece band, and again on August 27 at The New Parish, as part of the eight-city Stones Throw Soul Tour.

Cooke lives in San Francisco in an apartment filled with an estimated 10,000 45s and thousands more LPs and twelve-inch singles. He was born forty years ago in Newark, New Jersey, where he began collecting records as a kid and spinning and scratching at house parties while in middle school. He and fellow DJ Nick Andre have issued a dozen records on their Slept On label over the past thirteen years — some on vinyl, others in digital form only. Having briefly signed to Om Records, Cooke had an underground hip-hop hit in 2007 with “Go Left,” featuring his friends Gift of Gab and Lateef the Truth Seeker from Blackalicious. When Om requested a follow-up that did not use any samples, Cooke asked The Soul Investigators, whom he had met in Finland during a 2005 tour with Andre and rapper Nebulous, for an instrumental track. In trade, the band asked Cooke to sing on one of their other productions. Cooke recruited Glasper for the assignment, and the duo Myron & E was born.

Glasper, 44, was born in LA and recently returned to Southern California after more than a decade in Oakland, Phoenix, and Sacramento. Much like Cooke, who started out of as a DJ before becoming a singer, he was first a dancer and appeared in that capacity on the hit Nineties TV comedy series In Living Color. He then began taking voice lessons from Stevie Wonder’s ex-wife Syreeta Wright. Glasper came to Oakland in 1997 to work with Coffee Shop, a group that was being produced by D’Wayne Wiggins of Tony! Toni! Toné! Coffee Shop quickly dissolved, however, and Glasper ended up washing dishes at the Oakland club Geoffrey’s Inner Circle. He drove a big rig for a period before joining Blackalicious in 2002.

Both Glasper and Cooke are still active in Blackalicious. “I still do gigs with them when I’m available,” Glasper said by phone from the Stones Throw studio, where he and Peanut Butter Wolf were editing a new Myron & E video. “E just went to Europe with Lateef. Whenever they need our services, they call us.”

For now, the two singers said Myron & E is their top priority. After next month’s Stones Throw Soul Tour, they’re slated to go to Japan in the fall.