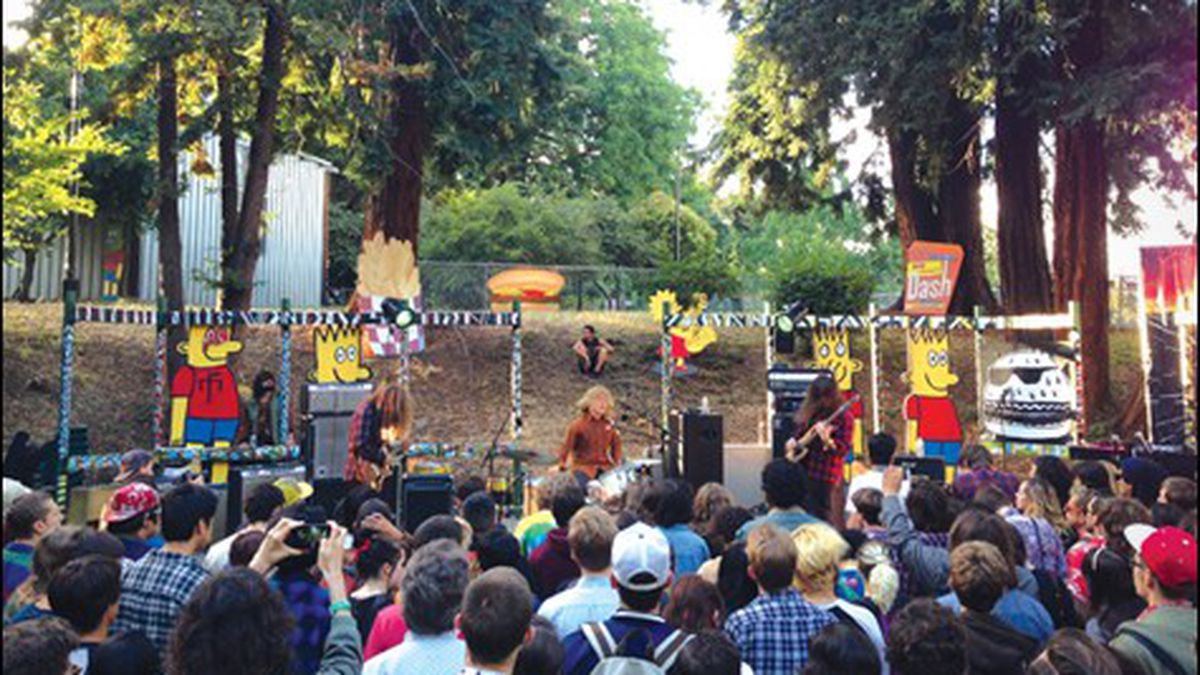 Burger Records' annual music festival — held in Oakland for the first time — brought out the rockers, young and old.

It was the second day of Burger Boogaloo’s festival at Mosswood Park, and the Memphis soul-punk trio Oblivians was closing the show with “No Reason to Live” off the band’s 1995 debut album, Soul Food. But no sooner did the band start the song than it promptly stopped, at which point guitarist/vocalist Greg Cartwright uttered the words that no band had dared to say all weekend: “This is wrong.” The members quickly regrouped and restarted the track, and Cartwright acknowledged he couldn’t remember the second verse. Nonetheless, it was one of the best sets of the weekend — full of the raw energy, lo-fi grit, and sweaty/trashy joy that garage rock is known for — executed by veterans of the genre.

In fact, it was the headliners that most stood out in a festival that included many young acts, demonstrating that, even though garage rock is known for its messiness, there’s still an art to making it compelling.

The fourth-annual festival — and the first one in Oakland — was put on by Orange County label Burger Records, which carved out its niche by offering limited-edition, mostly cassette releases of psych, punk, and garage-pop bands. The label enlisted Total Trash promoter and Berkeley resident Marc Ribak to book this year’s Burger Boogaloo and manage local logistics.

Burger Records has grown significantly since starting in 2007; according to Allmusic.com, it has sold more than 100,000 cassettes. But beyond resurrecting a format, the label has spawned an entire subculture of worshippers of loud, simple, sugary rock ‘n’ roll. The scene at the all-ages Burger Boogaloo included lots of vintage clothes, Doc Martins, and disheveled, long-haired rockers sipping PBR in the beer garden.

Ribak admitted there were many challenges to holding the festival in a non-traditional venue, including getting city permits and working with Oakland Parks and Recreation. (The BART strike was another worry, but luckily it ended the day before the festival started.) Organization seemed to be an issue, especially midday Saturday when a long line of people formed at the entrance, unsure of whether there were separate lines for Will Call and buying tickets. There were no ATMs inside the park and no ins-and-outs, making the two nine-hour days tough for those who forgot cash (although some kind security folks did permit people to leave and come back). Inside, three local food vendors, Oakland’s Subrosa Coffee, and a small beer garden provided sustenance, and San Francisco vintage store Vacation offered cheap duds for sale.

Mosswood Park’s stone amphitheater, which is surrounded by redwoods, provided a beautiful setting for the festival, but sound issues seemed to plague many of the bands.

On Saturday, Oakland trio Shannon & The Clams charged through a high-energy set fueled by charismatic frontwoman Shannon Shaw — one of the few females on the lineup. San Francisco’s budding garage-pop star Mikal Cronin, whose sophomore solo album MCII was released on Merge this year to rave reviews, couldn’t rescue his set from sounding muddy and flat. The 27-year-old Cronin has come into his own as a songwriter and frontman, but his band never quite tightened up enough to deliver the pop melodies he created in the studio.

One of the weekend’s oddest, and in my mind, most delightful, performances came from former Modern Lovers frontman Jonathan Richman, who at 62 still has the vocal chops and dance moves of a young man. In a sea of rockers, Richman looked like a folk hippie, bringing to his set just an acoustic guitar and jazz drummer Tommy Larkins, but his quirky, stream-of-consciousness songs resonated loud and clear in the amphitheater. Richman sang in multiple languages, babbled about outer space, and, at one moment, for no apparent reason, chased away a photographer from the grass hill behind the stage. He didn’t sing any Modern Lovers songs but covered “La Bamba” by Ritchie Valens, to which the crowd swayed and sang along.

Pangea on Saturday and Audacity on Sunday represented the grungy, SoCal skate/surf punk sound that NOFX made popular in the Nineties. Both bands appealed to the younger portion of the crowd, stirring up lively, fist-in-the-air mosh pits with their catchy, short, and very loud songs.

Trashwomen, which formed in 1991 for a one-off show of Trashmen covers, reunited for a rare appearance. The women used humor and banter to push through a set of stops and starts and “fuck-ups” (their words, not mine). But the crowd continued to cheer them on and, by the end, they almost seemed comfortable being onstage again.

A fixture on the Burger Boogaloo lineups, Ty Segall played both days of the festival — with one of his older projects, surf-thrash band Traditional Fools, on Saturday, and with a newer formation, Fuzz, which is inspired by heavy Seventies rock, on Sunday. Segall sang and played drums in both outfits, although his mic wasn’t on for the first song in Traditional Fools. That band still had the far better set, its surf melodies intricate and delicate, even at their most chaotic. Fuzz, on the other hand, seemed to confuse loudness for heaviness, and its ear-splitting jams felt indulgent and juvenile; the crowd responded with tepid claps.

The festival award for showmanship belongs to the endearingly goofy, gregarious band Redd Kross, which was started by brothers Jeff and Steve McDonald in 1980 when they were teenagers in Los Angeles. During the band’s set, Jeff McDonald never stopped moving, his long frame leaning into the pit as he played tambourine or jumping into Steve’s shadow to punch out a melodic guitar riff, all while he sang lead. The band’s glam, Seventies power-pop sound hasn’t evolved much over the past three decades, but it’s still among the best in the genre, which it proved with its first album in fifteen years, 2012’s Researching the Blues. New tracks like “Stay Away From Downtown” flowed seamlessly with hits like 1987’s “Peach Kelli Pop,” and every song was tight and flawless.

The newly reformed Oblivians’ appearance on Sunday was part of a nine-city summer tour in support of its new album, Desperation. The three-members — Cartwright, Jack Yarber, and Eric Friedl — have remained active in multiple bands, and Friedl’s Goner Records has released work by seminal garage-rock artists like the late Jay Reatard. The members have said in interviews that they reunited because they had fun playing together, and their chemistry was evident on Sunday: The musicians closely listened to one another, rotated singing duties, and even swapped instruments. Despite the aforementioned hiccups, the set included some of the best-sounding music of the weekend — full, but not loud; primitive, but not loose; bluesy, but not bleak. Experience, as they say, is everything.

A Minor Victory Against Gentrification in West Oakland