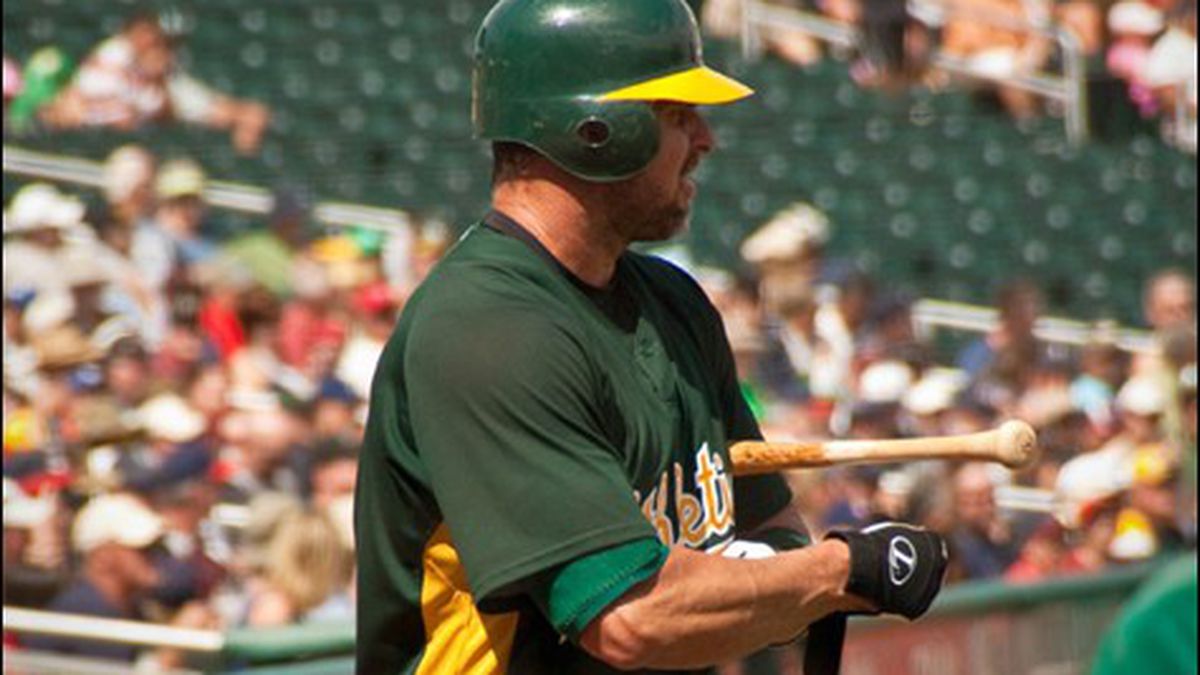 The other possible reason for why the Oakland A's were so successful during the first-half of the last decade.

From 2000 to 2004, the Oakland Athletics were the greatest baseball team that never won the pennant. Film fans can get that idea from Moneyball, the new Brad Pitt movie about Billy Beane, the club’s computer-genius general manager.

In that stretch, the A’s won 98 games per year — 20 in a row at one point. First baseman Jason Giambi and shortstop Miguel Tejada both were named the American League’s Most Valuable Player, and pitcher Barry Zito won the Cy Young Award. Oakland was in the playoffs four straight years — and lost in the first round every time.

There’s another idea fans might not get from the movie: The Moneyball A’s were loaded with steroid users. Nine men who played for the A’s between 2000 and 2004 used banned drugs, according to the Mitchell Report, former US Senator George Mitchell’s official investigation of baseball’s steroid era.

Three were customers of the Bay Area Laboratory Cooperative steroid mill. They said they bought drugs from Greg Anderson, who was a weight trainer for San Francisco Giants slugger Barry Bonds. All three also testified for the prosecution in Bonds’ perjury trial earlier this year.

Five more were customers of Kirk Radomski, a former New York Mets bat boy who became a major steroid supplier for major league players. Another Athletics player had an online pharmacy express-mail steroids to him at the ballpark.

Of course, Oakland had a rich tradition of steroid use, according to 1980s-era slugger Jose Canseco. In his memoir, Juiced, Canseco described how he and fellow slugger Mark McGwire used to go into the men’s room before games at the Oakland Coliseum and inject each other with steroids.

Jason Giambi, first baseman (1995-2001 and 2009; MVP, 2000): As Mark Fainaru-Wada and I reported in our book Game of Shadows, Giambi was an experienced steroid user even before he got caught up in BALCO. Giambi has testified that he switched from bodybuilders’ steroids to designer drugs in 2002, after he left the A’s for the New York Yankees.

Bonds and Giambi were among the stars who went to Japan for an off-season baseball tour, and Bonds brought trainer Anderson along. From Bonds’ trainer, Giambi got BALCO’s undetectable steroids, the cream and the clear. Giambi cooperated with the federal probe of BALCO, at one point demonstrating to a federal grand jury how he injected himself in the belly with human growth hormone. He also testified about Anderson’s steroid-dealing at Bonds’ perjury trial.

Jeremy Giambi, outfielder, designated hitter (2000-02): Jason’s brother also was a steroid user before encountering BALCO, he testified at Bonds’ trial. Jeremy Giambi said his brother introduced him to Anderson. The trainer said he could beat baseball’s steroid testing program with BALCO drugs, Jeremy Giambi testified. Jeremy Giambi told the BALCO grand jury that he believed the drugs were safe, saying, “I didn’t think the guy would send me something that was, you know, Drano.”

Randy Velarde, infielder (2000 and 2002): At Bonds’ trial, Velarde testified that he met Anderson in 2001 through former Giants catcher Bobby Estalella, another admitted steroid user who had encountered Bonds’ trainer in the San Francisco clubhouse. Velarde said he bought growth hormone and steroids from Anderson. On about ten occasions during the 2002 season, Velarde said he met Anderson in parking lots. There, the trainer would inject him with banned drugs, he said.

F.P. Santangelo, infielder (2001): Radomski, the former Mets bat boy, said he began selling steroids to Santangelo around 1997, when the infielder was with the old Montreal Expos. Radomski also sold drugs to Santangelo while the player was on the A’s, according to the Mitchell Report. Santangelo wouldn’t talk to Mitchell. But after the report was published, Santangelo, who by then was a sports broadcaster, admitted to using banned drugs.

Adam Piatt, outfielder (2000-03): In 2002, when the A’s had demoted both Santangelo and Piatt to the minor league Sacramento River Cats, Santangelo introduced Piatt to Radomski. Piatt said he continued to buy steroids and growth hormone from Radomski after he rejoined the major league club. For a time, Piatt’s locker was next to that of shortstop Tejada. Tejada asked about steroids, and Piatt said he bought the substances from Radomski for the shortstop, according to the Mitchell Report.

Miguel Tejada, shortstop (1997-2003; MVP, 2002): After he left the A’s for Baltimore, Tejada was dragged into the steroid scandal by Orioles teammate Rafael Palmeiro. In 2005, Palmeiro told a televised congressional hearing that he had never used banned drugs. When Palmeiro later tested positive for steroids, he blamed a contaminated vitamin injection he said he got from Tejada. Tejada denied it, telling congressional investigators he had never used banned drugs.

But then the Mitchell Report quoted Piatt about buying drugs for Tejada. The report included copies of  Tejada’s canceled checks. Tejada was charged with lying to Congress. He pleaded guilty and was put on probation.

David Justice, designated hitter (2002): Radomski told Mitchell that he sold growth hormone to Justice after the 2000 season, when Justice played for the Yankees. Brian McNamee, the trainer who claimed he provided banned drugs to Yankees pitching star Roger Clemens, said he had heard from Radomski about drug sales to Justice, according to the Mitchell Report. Justice denied the allegations.

Cody McKay, catcher (2002): His name and phone number appeared in Radomski’s address book. The former bat boy said he couldn’t remember how they met, but he said he sold banned drugs to McKay when the catcher played for the minor league team in Indianapolis in 2001 and again in 2002, when he was with the A’s. McKay wouldn’t talk to Mitchell.

Jose Guillen, outfielder (2003): In September 2003, Guillen paid an online pharmacy in Florida $2,083 for growth hormone, steroids, and syringes, billing records show. He had the drugs sent to him at the Oakland Coliseum, according to the records.

Good News for People Who Love Bad News About Wal-Mart