1. A car slammed into Bar Dogwood early this morning, causing serious damage to the popular tavern in Oakland’s Uptown district, the Trib$ reports. No one was injured in the crash, which was the result of a two-car accident at Telegraph Avenue and 17th Street. The motorists fled the scene. The car ended up inside the bar and smashed into a wall. 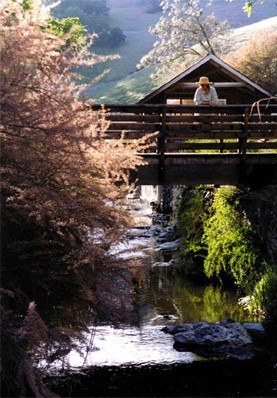 2. Wilbur Hot Springs, a rustic retreat in Northern California that has long been popular with East Bay residents, was badly damaged in a large fire over the weekend, the Chron reports. Firefighters evacuated about sixty people from the retreat; no one was injured. The blaze, however, destroyed much of the retreat, which features naturally occurring hot springs.

3. The Oakland school district is considering putting a parcel tax on the ballot this year to raise funds to expand so-called career pathways programs in the city, EdSource reports. The linked learning programs connect academics with real world working experience and have proven successful so far in getting students ready for college.

5. Many Safeway stores will likely close as the result of the buyout of the East Bay supermarket chain by the private equity firm Cerberus, which also owns Albertson’s, the Bay Area News Group$ reports, citing industry analysts.

6. The state legislature is considering a bill to label GMO products, although it likely will face fierce opposition from large food conglomerates — much like happened to the 2012 statewide ballot measure that sought to label GMO foods, the LA Times$ reports.

7. And the solar power industry won a victory when the state PUC ruled that homeowners with rooftop solar can continue to sell excess energy back to the grid, KPBS reports (via Rough & Tumble).