The Oakland school district is considering what may be a first-of-its-kind approach to pay for academy programs that prepare students for college and careers: ask voters to pick up some of the tab. The district is studying the feasibility of placing a parcel tax on the November ballot to help fund efforts to expand so-called linked learning, or career pathways, programs at its high schools. The programs integrate academics with real-world work experience, such as internships and job shadowing, to keep students engaged in their studies and help them succeed after high school. 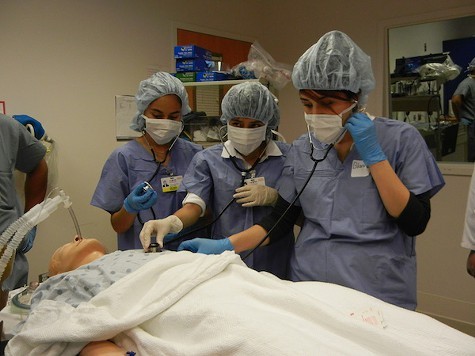 “I don’t know of any other place yet that has proposed such a thing (a parcel tax),” said David Stern, director of the College and Career Academy Support Network at UC Berkeley, which offers resources for districts on how to create effective academy programs. “I personally think that’s a great idea to bring it to the voters. That really will put these (programs) on a solid footing and I think you could make a very good case to voters that this is worth paying extra money for.”

Any potential parcel tax is still in the exploratory phase, but Oakland officials say it has promise to help them reach their goal of expanding career pathway and academy programs to its 9,200 high school students. Officials see the programs as key to boosting low graduation rates and improving academic performance. About 25 percent of Oakland students dropped out of high school in 2011-12, according to the most recent data available from the state.

Students who participate in Oakland’s existing pathways programs have an 84 percent graduation rate, according to district figures, and 52 percent of them complete the courses required for university admission, called A-G, with a grade of C or better — compared with 31 percent of district students in traditional high school programs.

The potential ballot measure comes as the state is putting an increased focus on making sure schools are preparing students to succeed in college and careers. A 2012 state law, SB 1458, requires the state to incorporate measures of career and college readiness into a high school’s Academic Performance Index, the measure used statewide to gauge a school’s academic effectiveness.

Ensuring that all students graduate “career and college ready” is also one of Oakland Unified’s long-range goals, outlined in a multi-year strategic plan created by former Superintendent Tony Smith to help bolster achievement in the high-poverty district. “The only thing is that nobody ever really thought about what does it really cost” to expand the programs, said Oakland school board Oresident David Kakishiba.

At the district’s Life Academy of Health and Bioscience, for example — often considered a model program — students take core academic courses aligned to a health field, then intern in hospitals, medical offices, and other businesses along their path to graduation.

Oakland Unified’s budget estimate shows it will cost an additional $13 million per year to expand career academy programs throughout the district. The estimate includes costs of rejiggering the school schedule to allow for eight periods, up from six; creating an associated summer school program; expanding support services for students; and hiring and training staff, among other costs.

The programs aren’t cheap, especially in the start-up phase, according to a 2010 report Stern co-authored for the non-partisan research group Policy Analysis for California Education. Programs that use linked learning cost, on average, about $1,500 more per student than traditional high school programs, the report said. Among start-up programs, the cost is closer to $1,899 per student because of additional demands on teacher time, among other factors, as the programs get ramped up.

Oakland Unified can expect some additional funding through the state’s new Local Control Funding Formula for schools, which gives additional money to districts with high numbers of low-income students. The district is also applying for grants through the state’s $250 million Career Pathways Trust for college and career programs, but additional resources will be needed, Kakishiba and other officials said.

No dollar amount has been set for a potential parcel tax, yet “something under $100” would generate about $9 million or $10 million a year for the district, Kakishiba said.

A preliminary voter poll indicates public support for a parcel tax, which would require approval from two-thirds of voters. About 67 percent of polled voters said they would support a theoretical $150-a-year parcel tax to “ensure all students graduate high school prepared to succeed in college and career,” according to a voter survey commissioned by Oakland Community Organizations and the East Bay Asian Youth Center, two community groups that advocate for Oakland schools.

Once voters are informed about linked learning pathways, support for a parcel tax jumps to 71 percent, said the poll by Fairbank, Maslin, Maullin, Metz & Associates. Support similarly jumped if the amount of the tax decreased, with the highest support (72 percent) at a potential $75 tax, the poll said.

That poll, which was not contracted by the district, got school officials thinking about studying a parcel tax in earnest. The school board has directed Interim Superintendent Gary Yee to pursue a formal, more targeted voter poll and make a recommendation at the board’s May 14 meeting on whether the district should pursue a ballot measure.

“Those poll results were so positive, that it’s hard to ignore them,” said school board member Jody London, who nonetheless said significant research needs to be done before officials decide whether they’ll pursue a parcel tax targeted specifically at expanding career pathways and academy programs.

“The minute there’s money on the table, everybody has a way they want to spend it,” London said, noting myriad pressures on district finances. Groups have approached the board in recent weeks with requests for salary increases for teachers, demands for certificated librarians in schools, even school gardening programs — all worthy programs, London said.

“You can only go to voters so many times, so the question is, is this the one thing you really want to go to them on,” she said.

Any measure could also appear on the ballot alongside a reauthorization of the city’s Measure Y, an $88-per-year parcel tax approved in 2004 to pay for anti-violence programs, raising questions whether voters would support both taxes.

School and city officials could potentially promote the measures together, as complementary efforts to reduce entrenched challenges in Oakland: combating violence and improving the schools, said Kakishiba, who also serves as executive director of the East Bay Asian Youth Center.

Any parcel tax would also have to be accompanied by a significant education campaign to inform voters about linked learning pathways, a relatively new effort in many high schools, acknowledged interim Superintendent Yee.

“For residents, it’s difficult for them to imagine it because it’s not the kind of high school they went to,” Yee said.

The district has already fielded criticism from those who question the focus on the pathways approach when schools are struggling to provide the basics.

“I’m confused about the career pathways system,” parent Misty Cross, whose son attends McClymonds High School, told the school board at a March 12 meeting where trustees heard an update on the district’s efforts to prepare students for college and careers.

“We’re trying to implement an eighth period, when we have six periods now” that don’t meet entrance requirements for the University of California and California State University, she said, adding, “We don’t have enough electives to even get our kids into college. We’re giving them things just to get by.”

Yee said a heavier focus on career and college preparation is part of a transformation of Oakland schools.

Comparisons with “the existing model of education is not where we’re going,” he said. “We’re actually talking about redoing what it means to be a high school graduate.”

EdSource Today is the journalism arm of EdSource, a nonprofit, nonpartisan organization founded in 1977 to engage Californians on key education challenges. Read more at EdSource.org.