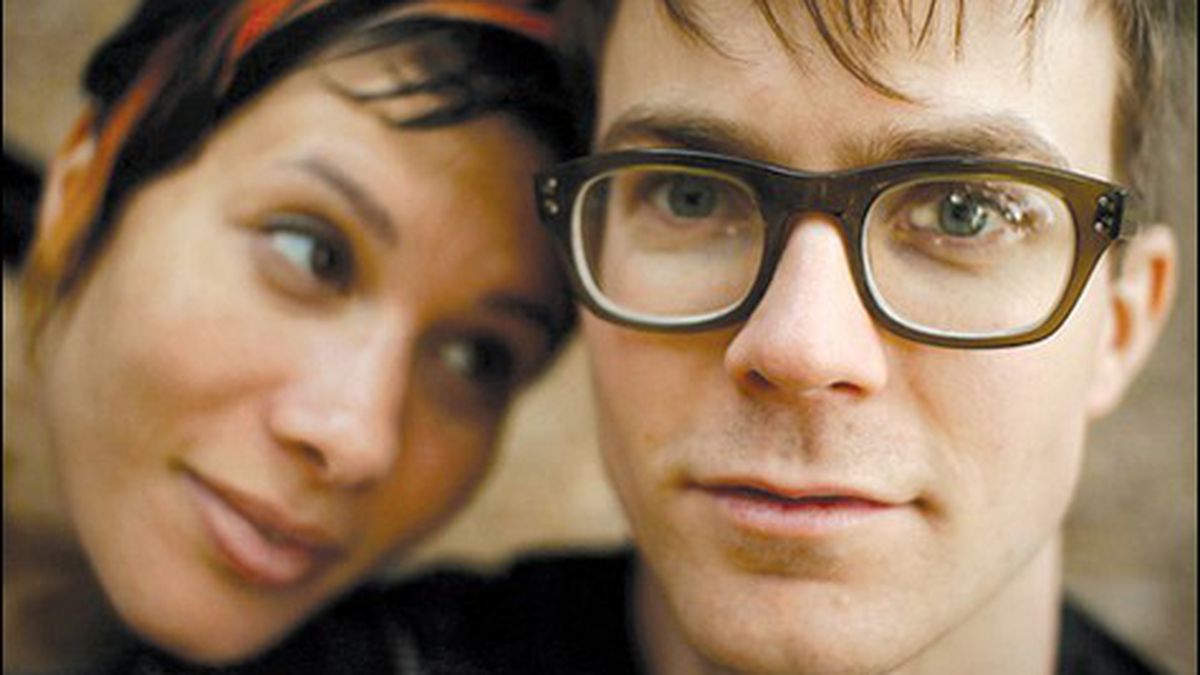 The Brooklyn dance-punkers win everyone over the Fox Theater.

You really had to wonder why The Bros were there.

After all, Bros do not engage in the kind of unabashedly twee concert behavior the Brooklyn-based dance-punk duo Matt and Kim have come to be known for. Bros do not dance, and bros definitely do not take joy in confetti or in covers of late-Nineties Europop, both of which were in great supply last Saturday night at the Fox Theater. And they certainly didn’t look like they wanted to be there, standing next to the bar, white-knuckling their beers, looking uncomfortable in thick team logo-emblazoned sweatshirts and surrounded by a sea of exuberant, sweaty, bouncing people.

And indeed, for at least fifteen minutes, The Bros (not their real names) didn’t so much as crack a smile: Not when Matt Johnson (lanky, adorable) and Kim Schifino (tiny, hyperactive) bounced onstage to the theme from Rocky after an incendiary set by Portland’s The Thermals, and Johnson — the duo’s keyboardist and main vocalist — gleefully threw his T-shirt into the crowd, announcing his intention to “turn this into one super show.” Not when Schifino, the drummer, sheepishly relayed the story of the band’s first time playing in Oakland — apparently to no more than five or six people, all of whom were expecting something acoustic and who promptly booed the synth-loving duo offstage. And not even when she managed to hop on top of her bass drum, shake her arms and do a little thirty-second shimmy, bearing the biggest, smiliest smile in the history of smiles.

“Ohmygod I love them!” someone yelled — less as an exclamation than as a declarative, as if to say he’d just come to realize the profundity of his affection for the two and felt like sharing with anyone within earshot. But still: nothing from The Bros. Astounding. Standing mere feet away from a pair of musicians who are more or less professionally fun, having built a career out of buoyant, sugary, synth-punk and a notoriously hyperactive live show, they stood stock-still and stony-faced, barely batting an eye. These Bros were good.

But finally, just around the four-song mark: a smile, and then a sort of awkward bobbing-bouncing motion — not quite dancing, but close enough. This was right about when Johnson threw about a hundred multicolored balloons into the crowd, and it was clear what was happening: The Bros were being broken down by the sheer force of fun pummeling them from all sides.

Indeed, everything about Matt and Kim’s set seemed engineered for fun. There was crowd surfing (fun!) and the aforementioned balloons (undeniably fun!) and, toward the end, a brilliant cover of Alice DeeJay’s 1999 earworm “Better Off Alone” (ironically fun!). About a month into their national tour, the fun thing is probably entirely calculated, and, at times, even slightly cloying, but it’s damn infectious. At one point, Schifino dove into the crowd and performed what Johnson affectionately described as her “booty dance” — a sort of semi-ironic, profoundly goofy, self-deprecating burlesque on the video-ho ass-shaking trope. At another, they led the audience — exclusively in their mid-to late-twenties, by the way — in a sing-along to Biz Markie‘s “Just a Friend.” The duo — a longtime couple in real life — treated the audience like old friends, sharing personal stories about each other, and declared the Fox the most beautiful venue they’d seen thus far on tour. Despite the fact that neither drums nor keyboards lend themselves to dynamic stage movement, they managed to look like they were constantly in motion, and if Schifino stopped smiling at all the whole time, it must’ve been for only a second.

And then, of course, there was the exuberance of the music itself: buoyant, new wave-inflected dance-punk, culled about equally from the duo’s previous releases as well as their latest, the brilliant Sidewalks. The sound at the Fox, always inconsistent, was undeniably bad, with an almost-tinny reverb that tended to drown out the lyrics, but nonetheless,”Cameras,” the horn-heavy first single from Sidewalks, was a standout, as was “Lightspeed,” which Schifino finished in deafening crescendo. About an hour after going on, they finished with the unrepentantly joyous ode to urban living “Daylight” and one final shower of confetti (because: fun.) And The Bros, bless ’em, were shirtless and sweaty and positively beaming, jumping along with everyone else.