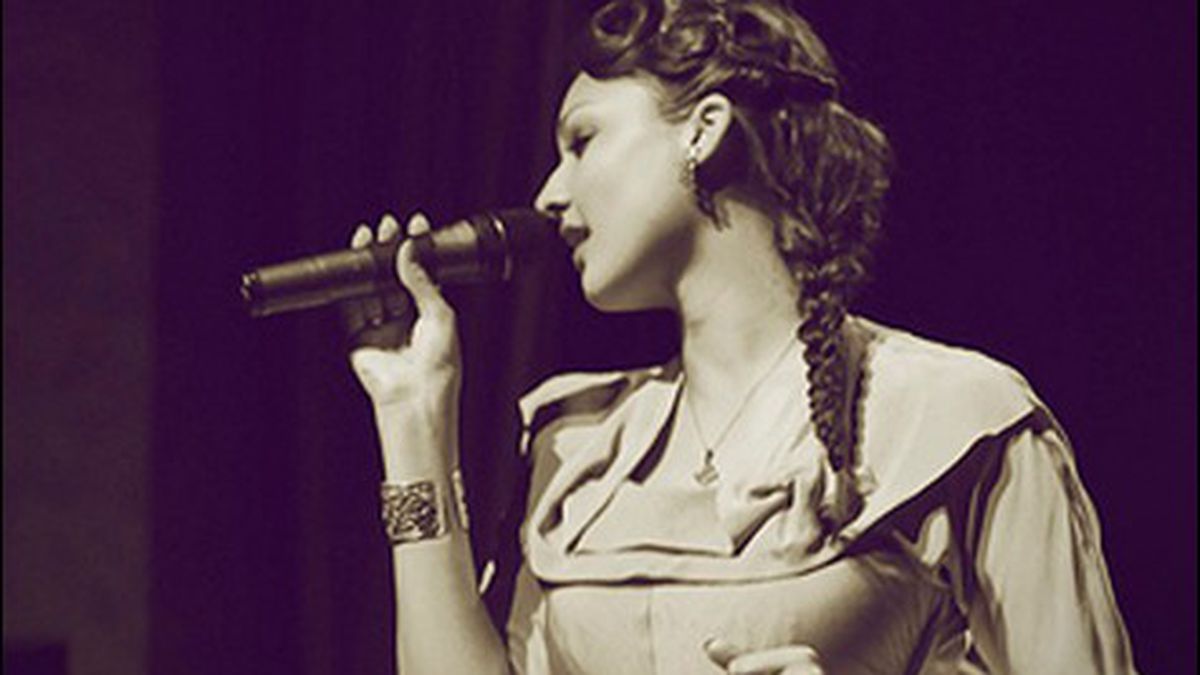 Midway through a recent Yoshi’s set of soul-spiced original songs and reinterpretations of tunes by the likes of Jamiroquai, Björk, D’Angelo, Mos Def, and Bob Marley — many of them anchored by the steady, bass-and-drum-heavy Memphis beats of her backup band, The Park — fast-rising Oakland vocalist Mara Hruby suddenly switched gears.

A most unusual coloring book/the kind you never see/Crayons ready, very well, begin to color me, she sang gently as the quartet shifted into waltz time. Her vibrato fluttered while caressing the lyrics, their hues changing with each line and finally ending with the words color him gone.

The heartbreaking ballad, written in 1962 by Fred Ebb and John Kander, has been recorded by many: Kitty Kallen, Sandy Stewart, and Barbra Streisand, among them. Hruby learned it from a 1963 album by Julie London, one of the sultriest jazz and pop singers of the Fifties and Sixties.

Despite it being written way before her time, the number fits the 24-year-old Hruby as well as it did London. The tall, svelte, strikingly beautiful Hruby performed in a black cocktail dress of 1942 vintage that had belonged to her great-aunt. She followed “My Coloring Book” with two more songs associated with London: “In the Wee Small Hours of the Morning,” and her signature tune, “Cry Me a River.” Hruby used expressive hand movements during “Cry Me a River” to help drive home her alternately delicate and dramatic delivery of the classic torch song.

All three tunes are intended for Hruby’s forthcoming tribute to London, an EP titled Archaic Rapture. It will be the follow-up to her R&B-oriented 2010 release From Her Eyes, which she sells at gigs (along with bracelets, scarves, and knitted caps that she makes herself). She is working on the EP with a cast of players that includes guitarists Nate Mercereau and Steve Wyreman, both of who bring a lot of experience to the young Hruby. Besides being a member of The Park, Mercreau has worked with Ledisi, Sheila E., Darondo, and Wallpaper., while Wyreman’s résumé includes writing songs for and recording with Rihanna, as well as touring with Keyshia Cole, Lauryn Hill, and Mary J. Blige. Hruby’s management at GFCnewyork — the firm that has represented her for the past two years and secured her engagements at the Blue Note in New York City, both Yoshi’s in the Bay Area, and prestigious clubs in Los Angeles and Washington, DC — is working on lining up national distribution for Archaic Rapture later this year.

Hruby was raised in the Oakland Hills; sang in junior high school choir; performed hip-hop, jazz, and other dance styles as a teenager with the New Style Motherlode Dance Company; and attended Skyline High School. Her tribute to Julie London, who died in 2000 at age 74, may seem like an odd choice. If London is remembered at all these days, it would most likely be for her starring role as a nurse in the Seventies television series Emergency! “I adore her voice,” Hruby said of London by phone from Los Angeles, a few days after the Yoshi’s show. “I really, really like the cadence and the tone in her voice.”

“I’m a huge Bobby Bland fan and a huge B.B. King fan, as well,” Hruby added. Indeed, her two-song encore at Yoshi’s ended with “Call It Stormy Monday (But Tuesday Is Just as Bad),” a T-Bone Walker blues song that Bland scored big with in 1962. For Hruby’s hard-hitting rendition, Mercereau borrowed the rhythm guitar riff from King’s “Rock Me Baby.” And, on the song’s final chorus, the singer dropped to her knees to cry out, Lord have mercy.

Hruby, who is of mixed racial heritage, has been likened to the late African-American actress Dorothy Dandridge, a comparison that might also be a nod to her personal style. “I’m a big fan of the Forties- and Fifties-era fashion — the classic woman of that time and how she presented herself,” Hruby said. Her favorite movie stars are also from times past and include Rita Hayworth, Marilyn Monroe, Jane Russell, and Barbara Stanwyck.

“I would love to act in films,” said Hruby. For now, however, she is focused on singing, a decision she arrived at carefully after graduating high school and opting to skip college.

“I’m very passionate about cooking. I was actually deciding between culinary school and music,” Hruby said. “The ducks just lined up for me and I decided to go ahead and go for music. I haven’t looked back since.”