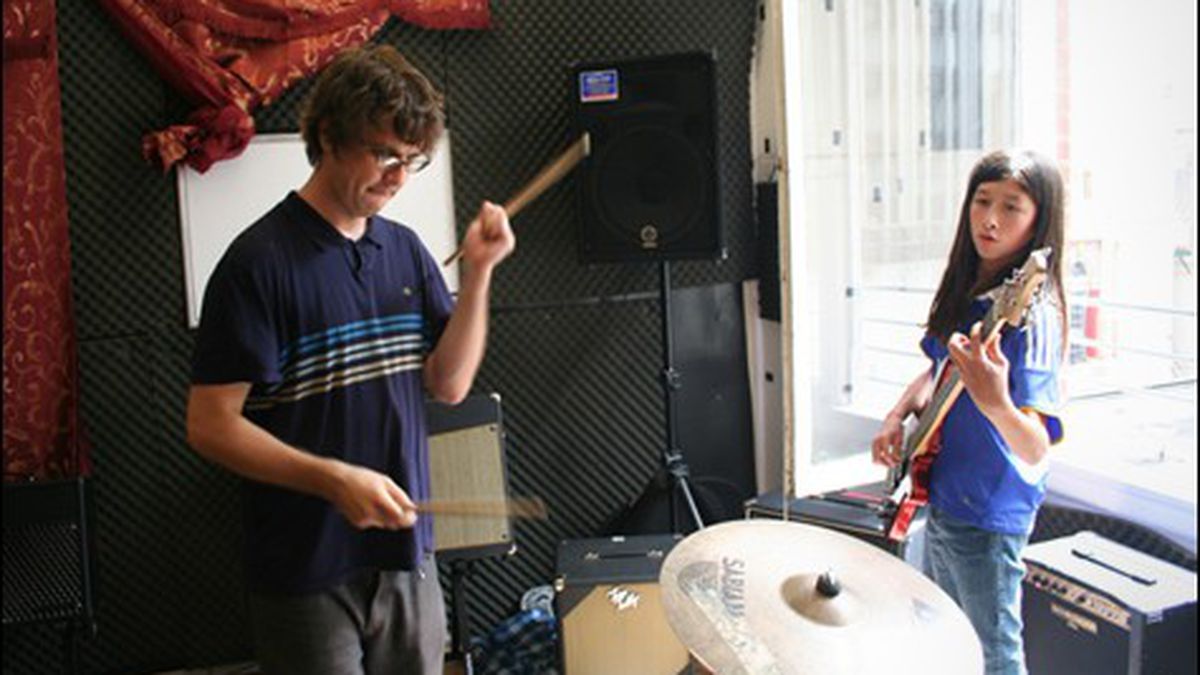 Nick Tamburro probably has the longest commute of any music teacher in the Bay. Every week, the experimental rock and jazz drummer drives four hundred miles from Long Beach to San Francisco for a weekend of private drum lessons and band rehearsals. It’s not that there isn’t work for drum teachers in Los Angeles, but Tamburro, who moved there last year, had found a gig in San Francisco that was too good to give up.

Tamburro’s colleague Warren Huegel, who also teaches drums at the Rock Project, explained why it’s a rare opportunity: “You know how when you’re fourteen and you have the older cousin who has the cool record collection and he’s like ‘Listen to this?’ This job is kind of like that.”

It’s been a long road for the Rock Project, even longer than Tamburro’s commute. In June 2010, School of Rock, which has more than one hundred locations in the country, abruptly announced to a room of stunned parents and weeping children that it would shut down its San Francisco location within the month. Though a landlord dispute was purportedly the cause, Tamburro said teachers believed their school was closing because it was not making enough money. Tamburro said the School of Rock representative strongly hinted that the parents could buy the school as a franchise (which would cost between $100,000 and $300,000).

“Until the money was in our faces, it was about the music and awesome kids and teaching them and hanging out with them,” said Tamburro, an energetic guy in narrow glasses and a cardigan.

The idea of losing the school drove parents to act. They didn’t take the franchise bait, but set out to write the mission and values for a new nonprofit. Nonprofit status would allow them to take donations, as well as avoid legal issues with teachers who were bound by non-compete clauses to the School of Rock. In just two months, Rock Project opened its first season with a Van Halen-versus-Randy Rhoads show.

Nearly three years later, Rock Project is still a nonprofit run by a board of parents who choose to allocate funds for improving equipment, expanding its instrument-lending library, and tuition-assistance programs for the young rockers. Tuition assistance is spread among all who apply, and 20 percent of current students receive tuition assistance, up from 15 percent last year, according to the Rock Project.

The structure of the Rock Project, which currently enrolls about seventy students, is similar to the old School of Rock: For about $350 a month, kids get one 45-minute lesson and at least one three-hour rehearsal a week, all geared toward preparing them for the Season Show, a public performance at a local venue. Each season lasts about four months, and in the summer, the school offers weeklong intensive boot camps, with a show at the end of every week. Students can take lessons only, but that is discouraged, as the school emphasizes performance and collaboration. Students can audition to be a part of the House Band, which plays paid or volunteer shows one to four times a month.

Ten-year-old Oakland resident Nicky Saxton-Garcia had been taking private drum lessons from Tamburro for years before joining the Rock Project. His mother, Kirsten Saxton, said that until she learned about the tuition assistance program, the expense and distance were a barrier. “I’m actually surprised this school didn’t start in Oakland,” said Saxton. “I’d like to see Rock Project spawn a sister school in the East Bay.” Saxton said it isn’t easy to get to the Rock Project’s home in San Francisco’s Maritime Hall, but said, “it is utterly worth it.” “It teaches the kids how much work it is to be a musician,” she said.

When they’re not playing Megadeth or David Bowie, the kids will often spend all weekend hanging out together between lessons and rehearsals.

“A lot of these kids have more friends here than they do at their schools,” said Ava Mendoza, an Oakland-based guitarist and Rock Project teacher.

Fourteen-year-old Sasha Berliner has played drums and vibraphone at the old School of Rock since she was seven. She said the teaching has only gotten better: “This Rock Project is more productive. The teachers are more experienced. They’ve been all over the world touring with their own bands that are super cool.” This week Mendoza and Tamburro will leave on a month-long European tour with their experimental, jazz-infused instrumental rock project, Unnatural Ways.

Berliner is in the House Band along with her older brother, Cole, who plays guitar. The House Band played at the Treasure Island Music Festival last fall, and Season Shows have been hosted by Thee Parkside, Bottom of the Hill, Make-Out Room, and Rickshaw Stop. “Local gigs in San Francisco, showing people that kids can rock as hard as adults, that doesn’t come in any other program,” said Berliner.

Berliner’s mother, Sheri Evans, who works as the school’s office manager, said teachers at the Rock Project now have more say in what music their kids learn: “School of Rock was based in this serious classic-rock vein, Led Zeppelin or The Who or Pink Floyd. We still do that, but we have been able to bring in more modern, obscure, or local music.”

At a Friday-night show at Thee Parkside last week, at least two hundred people filled the bar, cheering and throwing their fists in the air to Devo/Talking Heads and Black Sabbath sets. A surprisingly large portion of the crowd seemed unconnected to the kids and were just there for the show. But there were plenty of nervous parents like Aaron Hathway, who watched his daughter Zada as she sang “Whip It” and “Psycho Killer.” “Devo is brutal, the timing is really hard,” said Hathaway. “She played a Prince show here three years ago, and she looked like a deer in the headlights.” Now eleven, Zada looked every bit the budding rock star, commanding the stage in dark eye makeup and glittered cheeks, a pit of little kids gripping the edge of the stage at her feet.