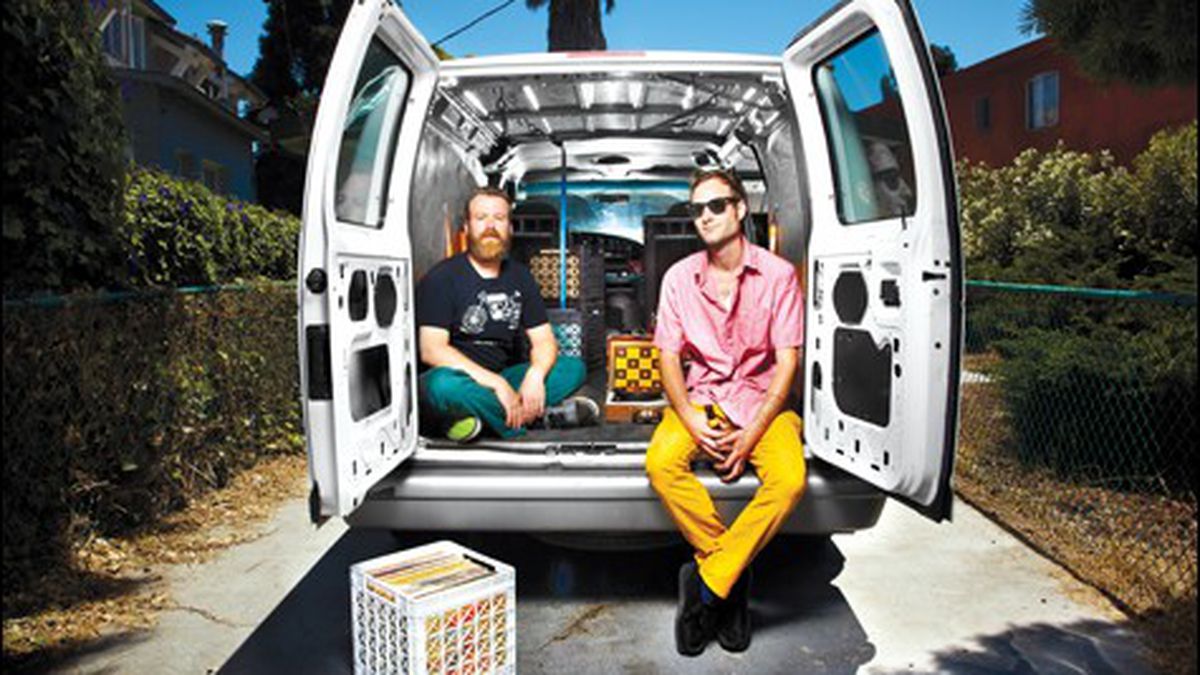 Cratediggers Andrew Schneiderman and Lloyd Cargo turned their passion for vinyl into a thriving business.

It was late afternoon at last Saturday’s Soul Congregation record sale/vinyl swap, and inside the cool, dimly lit Uptown bar The Legionnaire Saloon, Andrew Schneiderman was making deals: Five bucks for a Bob Seger record; a trade for a coveted gospel sampler.

Schneiderman and Soul Congregation organizer Cameron Thompson said that most collectors come in to buy or trade just a few records. “We make enough to buy more records,” Schneiderman said about the swap.

Still, Schneiderman and his business partner, Lloyd Cargo, have managed to turn their record-collecting passion into a full-fledged business. Since starting Manzanita Sound at the end of 2011, they have already ingratiated themselves in the tight-knit East Bay community that buys and sells vintage vinyl. They’ve amassed 10,000 records; become a fixture at local record swaps; and have picked up a monthly DJ spot at Bar 355, Manzanita Sound Soul Party, on the last Wednesday of every month. Manzanita has quickly built a reputation for showcasing rare and obscure jazz, blues, soul, funk, and R&B records, mostly pre-dating the early Eighties, which the collectors sell both online and in-person, out of their Oakland homes and at swaps.

Cargo and Schneiderman met in college in the Midwest; Cargo attended University of Michigan and Schneiderman was at Washington University in St. Louis. Cargo’s roommate was Schneiderman’s best friend from his hometown of Los Angeles, and they quickly bonded over records. After college, Schneiderman applied his studies in jazz and American culture to work for The Brubeck Institute at the University of the Pacific in Stockton, but he frequently visited the Bay Area, eventually moving here in 2011 to start Manzanita Sound.

Although vinyl’s comeback was already firmly established by then, Schneiderman said he had an “a-ha” moment. “I walked into Urban Outfitters and there was vinyl everywhere — $100 record players and a wall of records,” he said. “It reaffirmed what we already knew. It’s good to see people appreciate vinyl again.”

Schneiderman and Cargo started the business by offloading portions of Cargo’s extensive personal collection on eBay. But as the business grew — especially in France, Germany, and Japan — they needed to find new inventory.

“It’s a different model than the record stores, where the records come to you — we needed to buy more to sell more,” Schneiderman explained. “The Bay is rich in records, but it’s extremely competitive.”

In March, Schneiderman and Cargo equipped a large cargo van with crates full of records to sell at SXSW, and made stops along the way to dig for vinyl. The three-week trip yielded approximately 3,000 vintage 33s, 45s, 78s, and box sets — including a rare reissue. In Fort Worth, Texas, Schneiderman and Cargo visited a garage sale offering a bunch of 45s.

“We started digging and came across a bunch of copies of a reissue of ‘One Way Ticket’ by Bobby Crown,” Schneiderman recalled. “A man came into the living room, wearing PJs, and said, ‘That’s my record.'” The man turned out to be Crown, whose “One Way Ticket” single was originally released on a small Forth Worth label called Felco, but which found a new audience when it was re-released, along with his other early work, by Dutch rockabilly collector Cees Klop. The reissue is now part of Manzanita’s collection.

Schneiderman said local dealers frequently make trips to Detroit, the mecca for American record collectors, and to spots as far-flung as South America.

Manzanita’s inventory has included expensive rarities, like The Beatles’ Yesterday and Today with the “butcher” cover, which Schneiderman said he sold for a couple hundred dollars. But, he added, “That’s not our proudest sale — we like selling $10 records [just] as much.”

Schneiderman and Cargo each maintain private collections, in addition to Manzanita’s records, but almost everything is fair game when it comes to the business. “We’re willing to sell almost every record we have,” Schneiderman said. “I have the attitude that the record will come back to me.”

Cargo works part-time at the East Bay Depot for Creative Reuse, where he occasionally finds vintage records to add to the pile, but Schneiderman has made Manzanita his full-time job. Ultimately, his love of discovering music in its physical form and sharing it with other people is what drives him.

“It was intimidating when I first started going to swaps and talking to the person with the records,” Schneiderman said. “It can be easier to sell the higher-end records online, but we’re constantly trying to get people to come out to swaps to buy cheaper records. This is what I’m most into now — making people new to it feel welcome.”

Manzanita also launched a cassette label in April. Its first release was by Olympia, Washington artist Arrington de Dionyso. Schneiderman said they eventually hope to use their knowledge from selling records to start putting out reissues on the label.