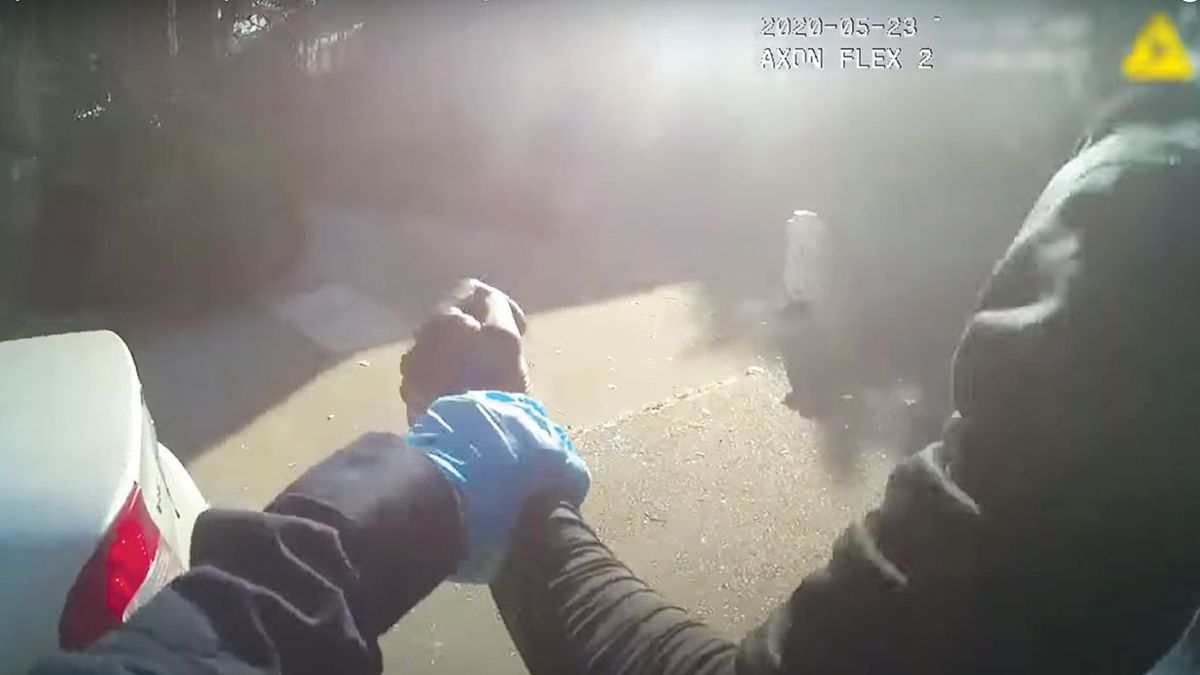 A viral video of a Black man being detained by Alameda Police officers while exercising is gaining the attention of city officials and the public in the aftermath of the killing of George Floyd.

Four Alameda police officers restrained Mali Watkins on May 23 before wrestling him to the ground on the 2000 block of Central Avenue in Alameda. Watkins was not arrested, but was later given a citation by police.

Alameda Police released body-camera video of the incident on Friday, along with the call for service. The call to the police dispatcher reported an African American man walking and dancing in the middle of the street.

The man, who was detained, told officers that he practices martial arts choreography every day in the area.

“I do this every morning—let me go!” Watkins said, after being detained by police. “I have the right to exercise on my street.”

For context, the incident in Alameda occurred two days before a Minneapolis police officer jammed his knee to the neck of Floyd for nearly nine minutes, leading to Floyd’s death and nationwide anger and protests.

Over the next week, a video of the incident in Alameda—created by a member of the public—went viral on various social-media sites.

Watkins is known to those in the neighborhood as someone who exercises in the area. A woman in the video is heard corroborating the man’s daily activity.

“Why are you making a problem out of nothing?” she called out to the police.

Alameda Councilmember Malia Vella said she saw an initial description of the incident in a Reddit posting on May 23, but without yet witnessing video of the incident. Vella alerted City Manager Eric Levitt on May 25 and asked for more information, she said. The officer involved was described to her as a rookie cop who incorrectly handled the matter, Vella said. She also asked for the citation to be rescinded.

However, when Vella later viewed the video, the explanation previously given to her by the city manager did not match what she had now witnessed. In a tweet on Friday, Vella accused the police department of a “cover-up.”

“They said there was one novice officer who responded,” Vella said in an interview. “In the video, there’s four officers. I don’t know why someone on staff would be compelled to mischaracterize what happened. There’s no reason to lie. There’s no reason for a cover-up. This is what people are talking about police departments and closing ranks.”

In her series of tweets, Vella said Levitt apologized for the misunderstanding.

“I don’t have cause to question Eric, I believe he is genuine,” Vella said.

In addition, the city is beginning an independent investigation of the May 23 incident.

“I don’t think our city manager is involved in a cover-up,” Vella said. “I don’t know who he spoke to and what he was told.”

Vella added that she hopes the independent investigation will help determine who disseminated the false or incomplete information to Levitt.

“If a bystander hadn’t recorded this, if people wouldn’t have posted this on social media, this wouldn’t have come out,” she said.

After Alameda Police released body-camera footage of the arrest, the reaction from the public was swift, and a dance party was quickly organized.

For some Alamedans, the absurdity of a Black man being arrested by local police for dancing and exercising in the street called for a healthy dose of mockery towards law enforcement’s actions.

With a DJ in tow and protesters encouraged to bring their own tunes, hundreds of Alamedans danced in the streets on Sunday from the Alameda Theatre on Central Avenue towards Chestnut Street and turned on Santa Clara Avenue to the Alameda Police Station on the corner of Oak Street and Lincoln Avenue.

The large gathering chanted “Black Lives Matter,” while some placed handmade signs calling for the end of police brutality and racism in America on the front steps of the police station. But they mostly danced as the late evening shadows fell on the island city.