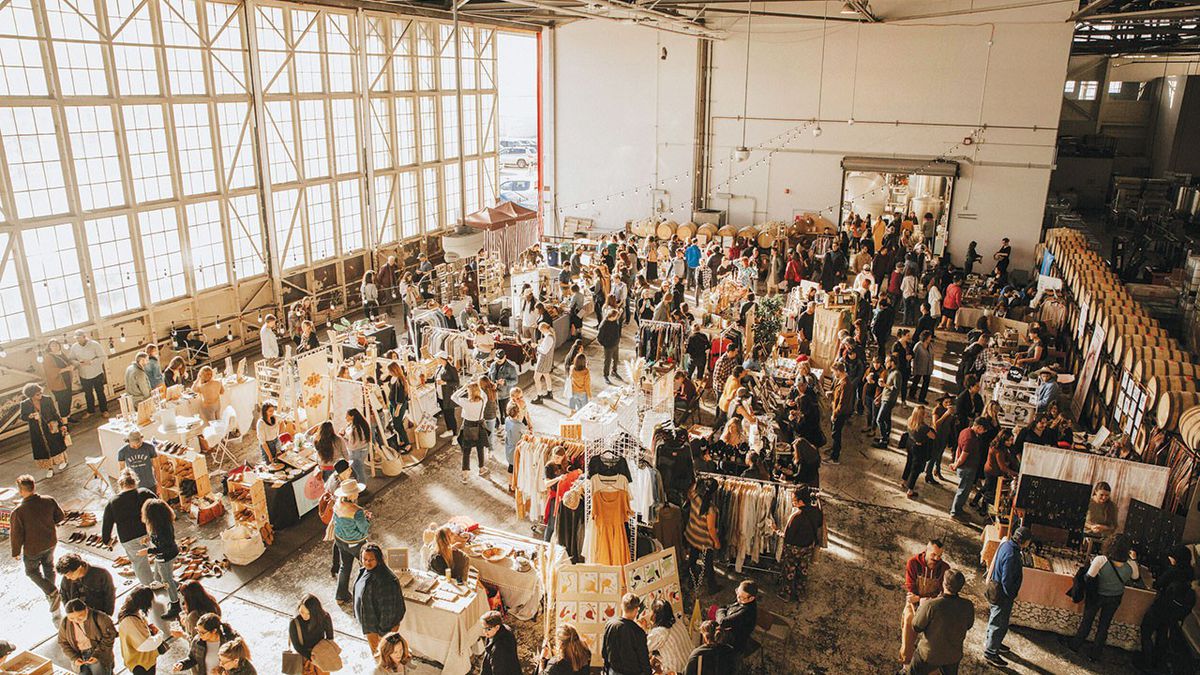 A modern maker’s journey from concept to customer is not an easy one, especially for small artisan producers and brands trying to find an audience for their products and services in a crowded online marketplace.

Jimmy Brower was one such creative, a North Oakland retail professional who left the corporate world to pursue his own desert-inspired lifestyle brand, West Perro, in 2016. Through the brand, Brower creates and sells sun hats, jewelry and other items in his online shop. In figuring out how to sustain and survive as a self-employed entrepreneur in an expensive Bay Area, Brower knew he had to create a community.

“I would find myself participating in craft shows and markets, and my network broadened,” he says. “All these things that are a benefit in the small business world; but the things I saw that were lacking in these larger fairs and markets was accessibility, affordability and diversity.”

In 2018, Brower founded Head West Marketplace to provide a diverse array of local purveyors a pop-up platform with which to share and sell their products and services in a physical space akin to a farmers’ market, only this one features art and crafts instead of fruits and vegetables.

“I wanted to build something that was affordable for new or emerging artists, or small businesses, or makers, or shop owners,” Brower says. “And I wanted to make it accessible to people in their own community, their own neighborhood.”

The first few months of Head West Marketplace in 2018 happened 10 blocks from Brower’s house, at Bay Street Shopping Center in Emeryville. He and the artisan crafters and makers who participated in those early markets saw immediate results.

“People were coming up to me that had not been exposed to small business in the form of sole entrepreneurs just working out of their households,” he says. “There were a lot of conversations happening about the value of time and materials and ultimately the value of products and services when it’s coming from a human being versus a corporation.”

While the pop-up space in Emeryville could accommodate 20 booths of local purveyors, Head West Marketplace quickly grew beyond that capacity and expanded its market at different venues, moving between Hangar One Distillery in Alameda and the Temescal District on Telegraph Avenue in North Oakland.

“I started to see doors open for all shapes and sizes of makers in the Bay Area,” Brower says. “These individuals needed an outlet from out behind their computer screen to physically connect with people, whether it be their already existing customer base, their followers on social media or just their family and friends to test out their ideas and creations. “

Brower also found that customers were coming to these marketplaces from the North Bay, the South Bay and the far East Bay. In 2019, Head West Marketplace doubled from two venues to four, adding pop-up markets at 1717 Fourth Street in Berkeley and at the Barlow in Sebastopol.

While Brower is still the one-man operation behind Head West, he acknowledges he does not do it alone, and he says he’s blessed to work with partners at these community-minded venues to create space for the makers and creators.

All of this rests, in some way, in Brower’s childhood, growing up in a small town in Illinois, with a mother who worked graveyards shifts at a hospital, a father who worked with his hands as a welder and a stepfather who would come home covered in soot from his job in a coal mine.

“Being inspired by that type of blue-collar hard work helped me to infuse that into what I’m doing today,” he says.

Today looks very different from the 2020 that Brower envisioned for Head West Marketplace, which was poised to hold an outdoor market nearly every weekend at one of its four venues beginning in March and running through the holidays.

“I led with this mentality of, ‘2020 is the year to see things clearly,'” he laughs. “I started hearing those things being echoed, that this was THE year of things happening. And things are happening, absolutely, important things are happening. But if I put myself in the silo of small business and those stay-at-home makers and crafters and designers, it’s been very difficult.”

Head West hosted its first market of the year on March 7 at the Barlow Center in Sebastopol.

“I was elated,” Brower says, of the event that drew 3,000 people. “There was so much success, so much optimism and so much positivity with that bellwether marketplace.”

Less than a week later, most of the Bay Area issued a stay-at-home order to stop the spread of Covid-19. Brower was disheartened to cancel his Head West markets, ultimately through June.

Yet, Brower says he’s also seen uplifting news in that time. He’s networked with other like-minded market organizers up and down the coast, inspiring him to continue supporting makers and purveyors with online resources and exposure.

To that end, Head West Marketplace has assembled a comprehensive resource guide for Bay Area small businesses dealing with the Covid-19 fallout. These resources include grant and loan opportunities, and Brower’s informed opinion on options for staying afloat during these dire economic times.

“I’m one of those business-minded people that says loans are for growth, not for crisis, and there were a lot of predatory lenders trying to capitalize on panicked individuals,” he says. “I built the online resources in the mindset that it is about making sure you survive after this moment, what that looks like in terms of personal finance and income, and what it means for your business revenue.”

In addition to providing resources for business owners, Head West is also sharing a list of Bay Area–and-beyond makers and designers who have pivoted to creating customizable and artistic face coverings during the ongoing pandemic.

Beyond supporting the shop-local scene, recent events in the U.S. have prompted Brower to join the growing chorus of “Black Lives Matter,” and when Head West returns to public events, Brower is making commitments to support Black makers and businesses, highlighting many planned actions listed on the Head West website such as providing no-cost booth space scholarships at every marketplace for Black-identified participants.

Brower is also assembling a resource and support directory for Black empowerment in the Bay Area on Head West’s site, with contact information for dozens of organizations including the local NAACP chapter, defense funds, lawyers’ guilds and more.

“I see myself on this rollercoaster—I don’t know how I got on it, but I look around and I see everyone I know sitting on it with me, we’re all experiencing the same thing but we’re all having different emotions because it’s affecting us on an individual level,” Brower says. “We don’t know when it’s going to end, but when it does end we are going to get off the ride together, as one.”