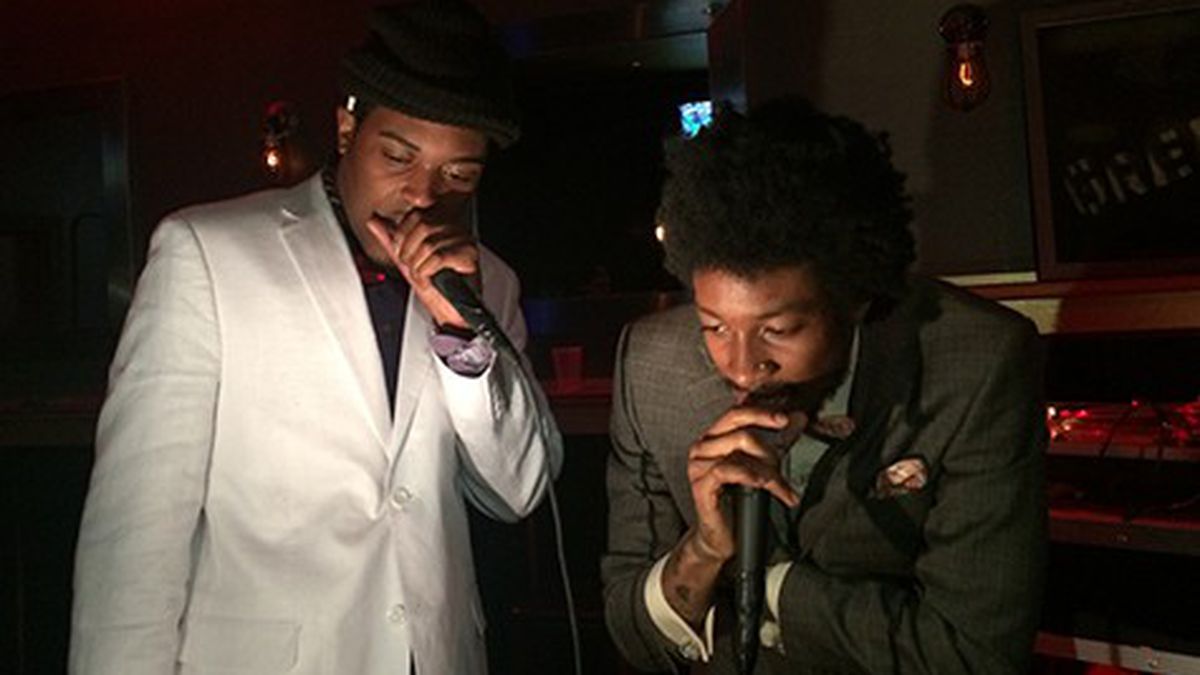 Main Attrakionz: Back to Cloud 9, Crew in Tow

The cloud rap originators reemerge with their second album, 808s and Dark Grapes III, but fame is only secondary to their love for their crew.

Although a dozen other rappers were in the Rock Steady last month for a Green Ova showcase, one could immediately tell that Squadda Bambino and MondreM.A.N. were the crew’s natural ringleaders. Having swapped their usual hoodies and jeans for matching suits and bowties on this particularly festive Thursday night, they busied themselves ushering rappers to and from the stage, shadowed by a bearded cameraman.

Collectively known as Main Attrakionz, Squadda (Charles Glover) and Mondre (Damondre Grice) were heralded as two of Oakland’s most promising rappers when their mixtape, 808s and Dark Grapes II, went viral in 2011. Squadda and Mondre’s early work with beatmakers such as Friendzone and Clams Casino garnered national attention. They’re now considered the originators of cloud rap, a term they adopted to describe their signature mix of intricate, melodic production and introspective rhymes.

Their first album, however, Bossalinis and Fooliyones, released in 2012, featured seventeen tracks and thirteen different producers — a patchwork of collaborations that distracted listeners from Main Attrakionz’ greatest strengths. Subsequent projects were received ambivalently. Eventually, Squadda and Mondre seemed to evaporate from the local and national scene altogether.

Perhaps when 808s II unexpectedly blew up, Main Attrakionz wasn’t ready for it. Squadda and Mondre were still living at home, recording in a foam-padded closet in Squadda’s childhood bedroom, when they began getting coverage in major outlets like Pitchfork and The New York Times. They played festivals around the country before appearing live for the first time in Oakland. Though ASAP Rocky and Danny Brown were among their supporters, Squadda and Mondre were inexperienced in the ways of the industry. The duo’s initial brush with fame proved to be fleeting.

During their apparent hiatus, however, Squadda and Mondre took time to hone their craft. For the past few years, they’ve spent long hours at the Pleasanton studio of production duo Friendzone (composed of James Laurence and Dylan Reznick), with whom they’ve developed an intimate creative relationship. Friendzone produced the entirety of Main Attrakionz’ second album, 808s and Dark Grapes III, which is due out on June 30 through Neil Young’s Vapor Records. (The album’s release date was recently pushed back from May 12.) The four of them have natural chemistry, and the new record evolves the cloud rap aesthetic to a significant degree.

“It’s second nature, working with them, so we put the best together,” said Squadda, as we stepped outside to talk during the Green Ova showcase. “Peanut butter and jelly — slap them together and give it to the people.”

“And then go get some bread,” interjected Mondre, laughing.

While Main Attrakionz’ last few projects contain a sample platter of beats, on 808s III there’s a harmonious, yin-and-yang quality to the way that Mondre and Squadda’s pared-down verses complement Friendzone’s multi-layered production. Melancholic, synth-driven melodies dominate the album. However, the producers insert occasional twists, like horn and flute samples. These add an unexpectedly analog feel to several tracks, despite the album’s otherwise digitized sound. With a flurry of samples playing off of each other simultaneously, Friendzone’s beats are complex and detailed without stealing the spotlight from Main Attrakionz’ vocals. Squadda and Mondre’s plainspoken lyrics about their daily struggles give the album a narrative focus despite its lofty instrumentation.

The two aren’t exactly lyrical virtuosos, but they compensate for lacking wordplay with idiosyncratic flows. Throughout the record, they engage in a back-and-forth: Mondre’s raps often sound detached and even jaded, while Squadda’s cadence is raspy and emotional. The vocally dexterous Shady Blaze, also of Green Ova, makes several guest appearances, and his impressively speedy rapping creates a pleasing contrast with Main Attrakionz’ mellower delivery.

The long-anticipated announcement of 808s III’s release was cause for celebration at the Green Ova showcase. It was Main Attrakionz’ first local show in several years. Squadda and Mondre seemed antsy to share new material with hometown fans. Having just returned from South by Southwest in Austin, they were already preparing to leave for a month-long national tour. Everyone from the Green Ova crew, old friends and supporters, and even Squadda’s mom were in attendance. But before Squadda and Mondre could take the stage, they wanted to make sure that each of their friends had a chance to play at least one song.

“Everyone who’s [performing at this show] has been around for many, many years,” said Squadda, after I observed that other members of Green Ova seemed to be making music more actively lately, as well. As we talked, various friends and family members came up to him for hugs and high fives. Animal, a rapper who had just played a song inside, put his arm around Squadda. “Like my man Animal, he’s been here before there was a Green Ova, before we put a name on Green Ova,” Squadda enthused.

Such is the selfless ethos of Main Attrakionz, which seems more interested in seeing friends come up than worrying about fame. The members of Green Ova have known each other since middle school. While Squadda and Mondre are the most widely recognized artists of the group, they promote their crew at every opportunity. 808s and Dark Grapes III contains shout-outs to Green Ova on almost every track.

Though some Green Ova members, such as Lolo and Shady Blaze, aren’t as prolific as they used to be, Main Attrakionz continues to promote their work and include them on projects. Squadda and Mondre have become mentors to others, including aspiring rappers Animal and Robbie Rob. This duo’s new music video for “Truthfully,” which recently debuted through the Green Ova YouTube channel, is an endearing ode to friendship that sums up Green Ova’s spirit of camaraderie.

Now that they’ve outgrown their D.I.Y. approach and are working with a label, Squadda and Mondre seem concerned with making calculated moves and surrounding themselves with people they trust — which is why Green Ova remains so important to them. As we discussed their latest endeavors during our interview, their friends chimed in with anecdotes from the early days. As Mondre summed it up, “Everybody who’s here has been here since before anyone heard of us — since the garage, sleeping on bean bags and shit, eating Cup Noodles.”