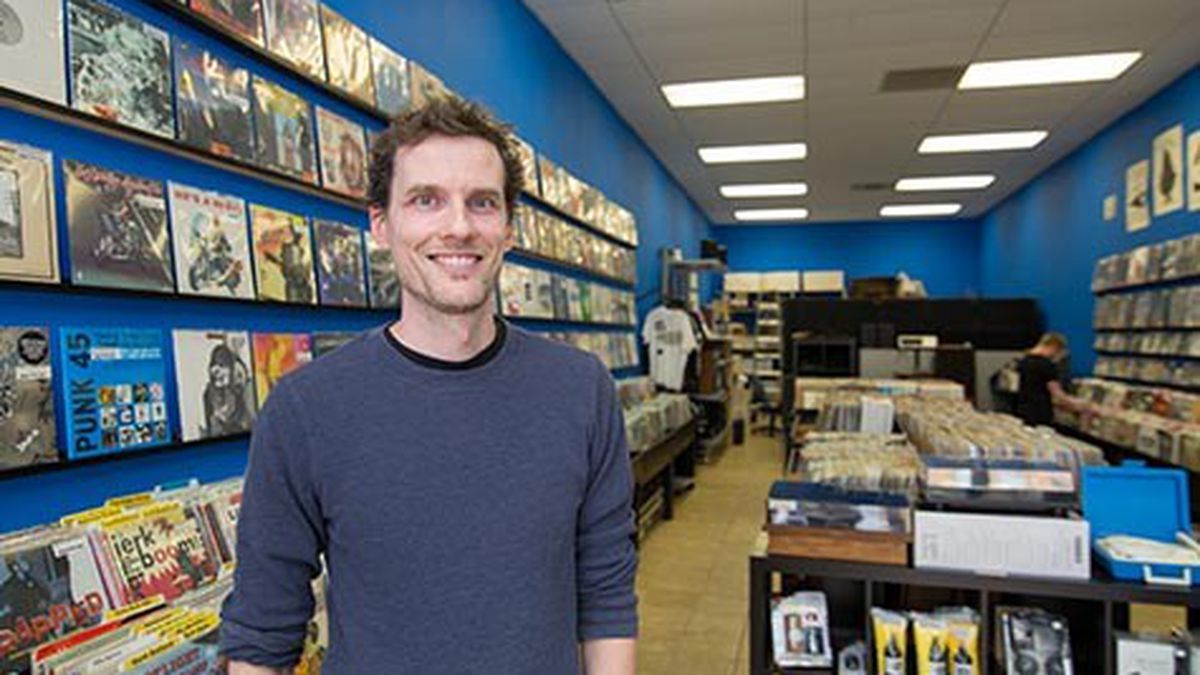 Local Bands You Should Listen to, According to Record Store Clerks

Plus, how a new model allows brick-and-mortar music stores to thrive in a beleaguered industry.

Working at a record store is like a highly biased and non-credentialed form of consumer advocacy. Clerks’ commentary (sometimes unspoken) and recommendations (sometimes unasked for) often characterize shops more than selection and decor. Of course, cashier chatter and advice (especially unsolicited) are also the source of every negative record store cliché around. But consider pop culture depictions of the smug and didactic clerk: They charm nonetheless and ultimately prevail. None of this is to say that East Bay record store clerks are necessarily boorish, but they’re certainly charismatic and offer solid advice on aural consumption.

Econo Jam and 1-2-3-4 Go! Records are about a mile apart in Oakland. Both shops represent a new record store model that’s being embraced around the country (Full disclosure: I worked at 1-2-3-4 Go! in 2012). Mostly, the stores carry vinyl, and, because no brick-and-mortar can compete with the internet’s selection, orient stock around particular, niche genres. Each shop further cultivates its identity partly through non-retail endeavors. 1-2-3-4 Go! boasts an in-house record label, and both shops host in-store performances, art shows, and assorted events. But since clerks leave the most vivid impression of a store, I asked some employees what local releases to buy.

“Well, cassettes are like the new seven-inch,” said Matt Thompson at Econo Jam after suggesting two local releases — by Baus and Healers — on tape. He seemed indifferent to the thoroughly reported cassette renaissance, noting simply that tapes have replaced seven-inch records in terms of affordability and practicality for bands looking to self-release material. These two — along with Econo Jam owner Tom O’Shaughnessy’s tape recommendation, Earhammer Soundsystem by No Statik — are readily listenable for free online. That’s reflective of a broader trend, where digital content complements, rather than combats, the carefully crafted physical media peddled at stores such as Econo Jam.

O’Shaughnessy played Earhammer Soundsystem on one of the many stereo systems available for purchase. A curio in the storied local hardcore band’s catalog, Earhammer Soundsystem is basically a remixed version of No Statik’s 2012 album, Everywhere You Aren’t Looking. Blitzkrieg drum fills are isolated and looped into hyperactive break beats, and serrated vocals morph into phased and flanged electronic textures. Some songs begin like the original versions, and then the guitar riffs slowly and subtly decay, while others feature only treated vocals, extricated from their original context and suspended over a sea of amorphous bass. The cut-up treatment retains all of No Statik’s intensity while evading hardcore’s limitations.

Thompson recommended Healers, a local trio whose recently released tape, Time Is a Vulture That Is Always Circling, places moody guitar leads and raspy shouts atop a straight-ahead rhythm section. A keyboard replaces the bass guitar role, filling the negative space left by bandleader Nick Wortham’s sparse guitar leads with a distinguished, dark luster. “Dissociation” is a surprisingly tuneful song, one that evokes disheveled indie-rock and seems to clash with Healers’ stark, speckled black and white cover art. It’s an exception, though. On most tracks, thumping tom-tom drums create anticipation, relieved by Wortham’s ice-pick guitar leads, and resolved by his pained vocal delivery. Time Is a Vulture That Is Always Circling’s cover art mimics the tension at the heart of Healers’ power.

At Econo Jam, Thompson spoke highest of Baus. The Oakland trio’s Idol Minds album — a fraught collection of rock-power-trio ingenuity with skittish beats, lean bass lines, and hysteric vocals — was released on a cassette earlier this year; the band plans to roll out a vinyl version soon. Thompson explained his fondness with the admission, “I’m a sucker for post-punk.” At 1-2-3-4 Go!, shop clerk Rob Fletcher also championed Baus, sputtering praise while price-tagging records at an astounding rate. His testimony was more colorful.

“Why do I like Baus? Y’know, ESG, DNA — probably some other weird New York bands with three-letter names — they’re like that,” Fletcher said. “They have that song that’s like parts of three different songs but they play them together. The first time I heard that my eyeballs fell into my scrotum. [Frontman] Mike [Morales] works next door [at Homeroom]. That band is fueled by beer and mac ‘n’ cheese. They should be more sluggish. It’s amazing.”

Of course, these stores aren’t alone in the East Bay. Stores such as Stranded in Temescal, Vamp in downtown Oakland, and Dave’s in Berkeley each cater to certain microcosms of the musical universe and advance a new business model for a notoriously beleaguered industry. And all of the evolving retail philosophies preserve one of the most important elements to the music fandom experience: room for singular, opinionated listeners, some of whom are more boorish than in other kinds of stores — and some of whom work there.

Thinking Outside the Cell

A Burmese Resurrection: Grocery Cafe Will Get a Second Life in...