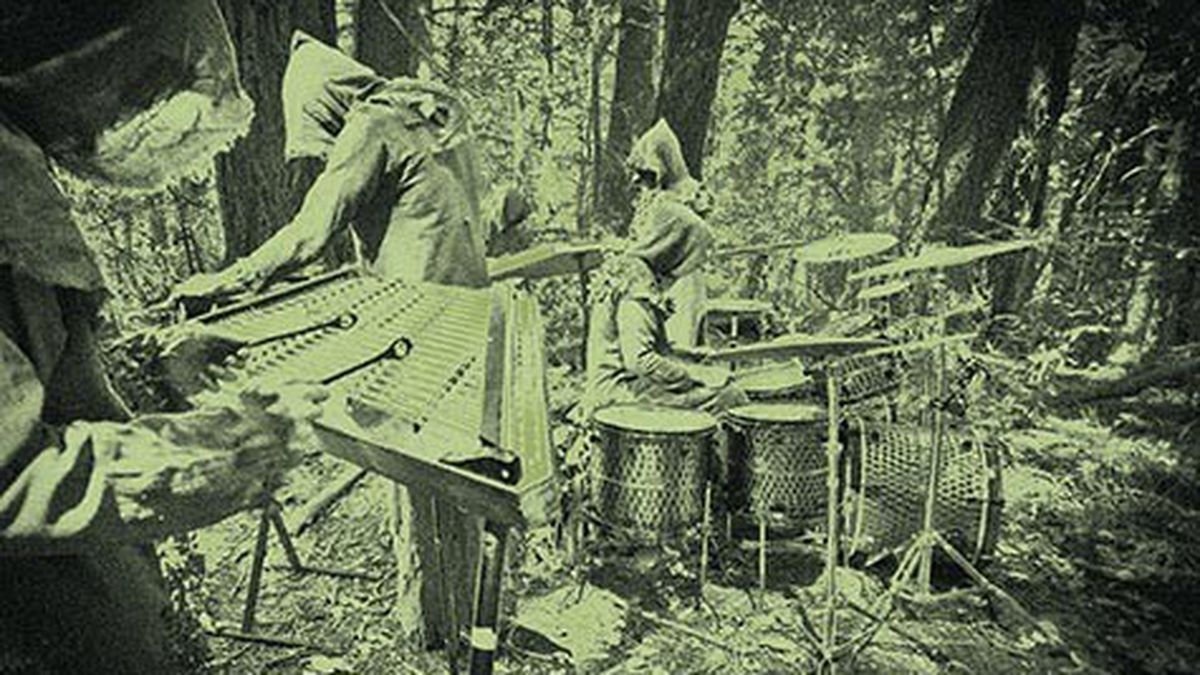 Seated behind an elaborate drum kit in his tidy practice space, Otrebor, the chosen name of the artist behind the conceptual metal project Botanist, sketched the narrative details of his fourth album, 2013’s IV: Mandragora: A “demonic, floral entity” named Azalea explains to the project’s human protagonist, The Botanist, “that he must raise an army of mandrakes — alchemical creatures from mythology — to annihilate humanity.”

Since 2011, Botanist has released five albums and a split LP with another local metal act, Palace of Worms. The first, I: The Suicide Tree, garnered voluble praise from metal and non-metal fans alike, appearing on year-end lists on NPR and Pitchfork. Botanist skirts the stylistic lines of doom and black metal, but the distinct presence of hammered dulcimer (instead of guitars) and certain lyrical topics remain consistent across Otrebor’s growing discography. Taken together, Otrebor’s use of scientific terminology and mythological references create a lyrical world that’s not unlike fantasy fiction.

Despite a growing lexicon and cast of characters (Botanist’s website features a glossary), Otrebor said that his underlying intentions of the project remain simple. “Botanist is a vehicle to revere the natural world as if it’s divine, as if it is the most tangible aspect of God that we as humans can see,” he stated. “Botanist is about the aesthetics of the natural world,” he continued, and gestured toward a copy of his latest release, VI: Flora. “Look at the cover of the album — it’s about the beauty of this.”

The cover depicts a color painting of blooming butterfly orchids, which Otrebor referred to as “oncidium papilio,” the plant’s Latin name. Credited to L. Stroobant in 1853, the image originally appeared in an obscure scientific text. Otrebor first discovered it online, then located an original copy of the book, out-of-print since the nineteenth century, in the Peter H. Raven Library at the Missouri Botanical Garden, and paid for a high-resolution scan. The booklet contains song lyrics and lengthy Latin titles, which are very helpful because Botanist is a concept project with indiscernible vocals.

“I try to make Botanist as little about me as I can,” said Otrebor, who declined to disclose his age. He said that he grew up in San Francisco and first discovered metal through bands such as Dio and Iron Maiden when he was seven or eight years old. As long as he can remember, solitary experiences in natural settings have carried spiritual significance. Otrebor doesn’t consider Botanist political, but the project’s central conceit critiques human beings’ treatment of the planet.

“It’s not only that plants are interesting,” he said. “They’re extremely important, the most essential part of the world. If we destroy that, we will die. Instead of just putting that [message] out there, Botanist uses allegory.” Of course, Otrebor’s personal conviction isn’t hard to glean from the lyrics, no matter how labyrinthine and esoteric the dramatization becomes. “The misanthropy,” he said, “comes personally from being disgusted by people not caring about the environment.”

Otrebor said that Botanist’s misanthropy — which manifests in the central character’s vehement loathing of his species — is also an homage to black metal. With Scandinavian origins in the early 1990s, black metal is characterized lyrically by themes of isolation, nature worship, and misanthropy, and sonically by blast beats, tremolo-picking, screechy vocals, and budget recording quality. Otrebor also identified with another element of the style, an element that he likened to classical music.

“Black metal is the most romantic of all the metal styles,” he said. “There’s this shared element of romanticism, of epic-ness, transcending the mundane.”

To Otrebor, the hammered dulcimer expresses these qualities better than guitars. After a street performer introduced him to the instrument, he began to experiment with it in a black metal context, and was pleased with the results. “Dulcimer has this constant choral effect,” he said. “All of these notes ring at once and it creates these amazing overtones. They just sound sinister and sad and epically melancholic,” he continued.

In a 2012 interview with the English music criticism website TheQuietus.com, Otrebor said he was finally looking to perform live, having worked up to that point as a solo recording artist. “Interested parties, contact me,” he announced to prospective band mates. “I’m serious.” In a testament to Botanist’s cult profile, the appeal worked. But with a band together, amplifying the hammered dulcimers for live performances posed a new problem.

Otrebor bought his dulcimers from James Jones, a Virginia-based instrument maker. In the studio, he was able to record them as acoustic instruments. To customize them for live performance, Otrebor worked with Jones to devise an electric pick-up solution that could amplify the instrument over blast beats and shouts without compromising tone or creating feedback. In more than three decades of making instruments, it was the first time Jones had been asked to amplify a dulcimer so greatly.

In August 2013, Botanist performed live for the first time. At The Lab in San Francisco, Otrebor played the drums with his back to the audience. Facing the crowd were two hammered dulcimer players and a vocalist who also played harmonium. All performers donned brown cloaks decorated with scraps of greenery. The dulcimer players struck intricate patterns on the instrument, eliciting harrowing tides of resonant tones that ebbed and flowed along the course of each lengthy song.

Practically every type of musical performance involves theatrics, but Botanist’s first set commanded a grandiose, sweeping drama that’s particular to metal. In conversation, his explanations of science, mythology, and narrative devices collide with fervent references to metal. However serious and severe Botanist appears, Otrebor is first and foremost a gushing fan. After a lifetime of engaging with metal, he’s clearly tickled to contribute new volumes to the form’s spiky, leather-bound annals.

“If you go see Meshuggah play live, they have eight string guitars,” Otrebor said. “My new dulcimer is kind of like that.” He cited Cannibal Corpse as a band that’s restricted by the expectations of its audience, Carcass as another metal band known to extrapolate on scientific terminology, and King Diamond as an act that’s limited by its conceptual obligations. Most telling about Otrebor’s besotted relationship with the history of metal was his perspective on the local metal community. “Somewhere … people are looking at the Bay Area scene and making up all these stories and romanticizing it and that’s awesome.”

Belying Otrebor’s doomsday fixations is hope, at least for the plants. When Azalea charges The Botanist with his mission, she notes that he too will die. When people talk about saving the environment, Otrebor knows they mean to save it for themselves. The natural world will endure human carelessness and persevere. As he put it, “Botanist tells the story of a person who waits until everyone dies and utopia can rise again.”