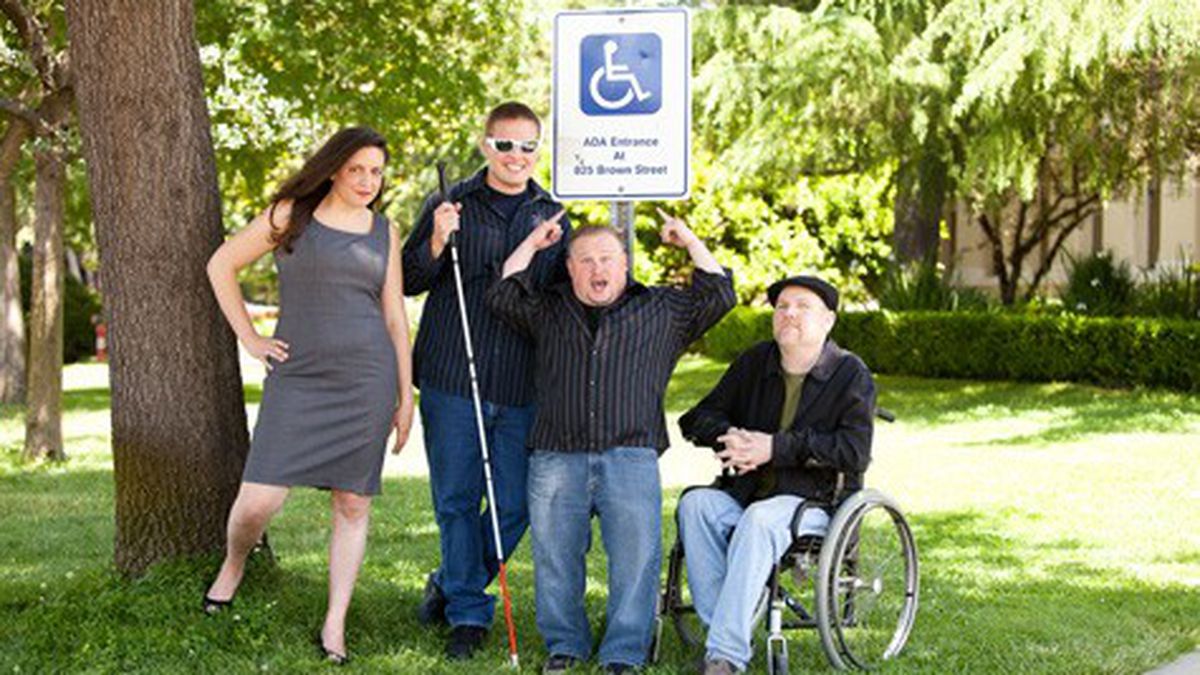 Laughing With the Disabled

A comedy troupe made up of comedians with disabilities aims to educate and entertain at the same time.

Michael O’Connell got into comedy on a dare. Unemployed at the time, he had nothing better to do when a friend suggested that they perform at an open mic comedy night at Tommy T’s in Sacramento. But after winning the competition, he fell in love.

Late to the game at the age of 41, O’Connell was fortunate and got good gigs quickly, partly because of the novelty that came with being a “wheelchair comedian.” His business card says “100% Comedy, 0% Stand-Up.”

O’Connell has Emery-Dreifuss muscular dystrophy. He was used to being the only person in the room in a wheelchair, but watching comedian and self-identified “little person” Steve Danner perform at Laughs Unlimited in 2010 gave him an idea. “Instead of making fun of his disability, he was stealthily making fun of the way other people react to it,” O’Connell recalled. He approached Danner, as well as visually impaired comedian Eric Mee, with the concept of starting a troupe of comedians with disabilities. They all signed on.

The Comedians With Disabilities Act’s first show at the Sacramento Comedy Spot sold out. When they got booked at San Francisco’s Punch Line two months later, stuttering comedian Nina G. asked if she could be their guest, and after the show the three agreed she should become a permanent member. “She smoked us on stage,” said O’Connell. “She represented something important, which is a non-apparent disability. That’s a part of the disability world that people overlook.”

Nina had worked to increase disability awareness for a long time, but comedy was her dream since she was eleven years old. She didn’t try it because she thought, “you can’t stutter and be a stand-up comic,” she said. “I had to challenge my own biases about that. I tell everyone that they can do everything they want to do, but I wasn’t doing it myself.”

The members of the troupe aim not to make fun of themselves but to educate others without being whiny or preachy. Because their experiences are not often represented in the media or in comedy, they hope to teach able-bodied people about what their lives are like and “maybe how not to be such an asshole,” said Nina.

The troupe, joined by special guests Queenie TT and Steve Lee, will be performing at the Pacific Pinball Museum (1510 Webster St., Alameda) on Saturday, September 14, in a benefit for the museum. Following the show will be a dance party DJed by Darren Brown. The group will do another show in Oakland in October and have plans to perform in New York and Memphis, Tennessee next year.

So far, audience response has been mostly positive. After a performance at St. Mary’s College last spring, many people with non-apparent disabilities came up and expressed how much they liked the show, said Nina. O’Connell mentioned that they have a significant disabled fanbase, which they all really appreciate. “It looked like a wheelchair biker bar,” he said about one of their shows in Oakland. “To have all those people really getting my jokes, that’s a real pleasure.”