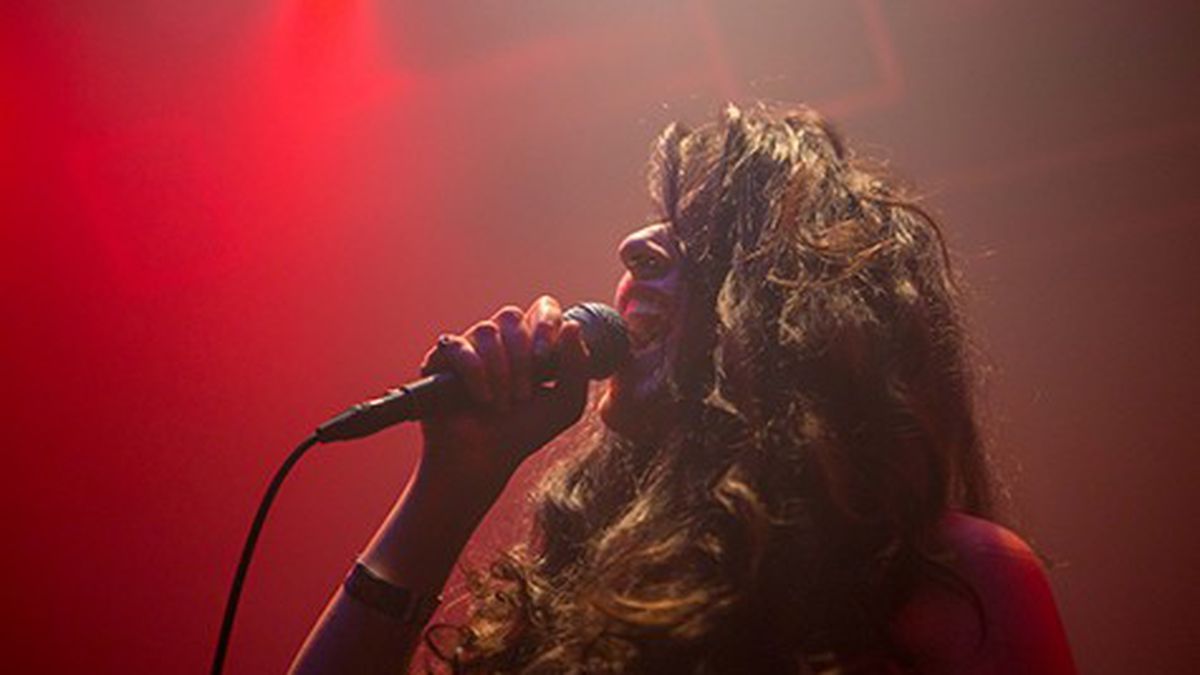 Kristina Esfandiari demanded, “Lower the lights,” and the stage assumed a crimson hue as a sample of muddled choral voices grew louder. With the long strokes of a down-tempo bruiser, the drummer synchronized with a bassist, whose violent motions evoked yanking teeth. Esfandiari, swaying calmly to the funereal tumult, parted her black mane intermittently to reveal the crumpled brow of an expressive vocalist mid-howl. Not long into the song, her elongated phrasing gave way to husky grunts. She collapsed on the floor.

This was a King Woman performance at The Rickshaw Stop, part of Noise Pop — the annual indie hullabaloo that colonizes the local music conversation for a couple of weeks every year. The upstart doom outfit’s austere stage disposition suggested the poise of a band remaining aloof to the attention that they know is imminent. Doubt, King Woman’s recently released four-song EP, accrued the sort of buzz that a coveted spot on the roster of reputable local metal label Flenser tends to elicit from dark music devotees, and a Rolling Stone premiere impressed everyone else.

For Esfandiari though, performance is a legitimately cathartic expulsion of past trauma, rivaled only by taking drugs, in terms of effectiveness.

“Basically,” Esfandiari said recently over coffee, “I was raised in a cult.”

Esfandiari, 27, grew up in a Charismatic Christian community. At the behest of her mother, she joined the choir at the age of 15, and eventually became a worship leader. After moving to the Bay Area at age 22, however, she started seeing her upbringing less in terms of faith than indoctrination.

“It was cult-like because of the control certain leaders had,” she said. Declining to reveal details, Esfandiari said that it bore “all of the characteristics” of a cult.

“I was taught to be a meek lamb, with a soft, angelic voice,” she continued. “It took moving to the Bay Area to find that I’m actually a strong woman.”

After extricating herself from the environment, unsettling memories surfaced. “I started getting flashbacks, suspecting all of these things that I saw weren’t right,” she said. Symptoms of dissociation and post-traumatic stress disorder appeared. “I didn’t consider myself Christian anymore,” she said. “But the values were ingrained in me.”

Struggling to expel the congregation’s conditioning, she bonded with Sky Madden, who’s one-half of the duo Chasms, and the bassist in King Woman. “I was DJing one night with Sky and got high.” Afterwards, Esfandiari and another friend watched the “brainwash videos” that they both remembered from childhood. She remembered, “Together, we just laughed through it.”

So instead of the Charismatic Christian practice of faith healing — dramatic hand motions believed to expel physical and spiritual ailments — Esfandiari took to substances. They worked better.

But perhaps the ceremony — in which a faith healer riles and cures a congregation like a consummate emcee of the Holy Spirit — taught Esfandiari something about stage presence. To renew her efforts of playing music outside of a worship context, she first posted an ad on Craigslist. Whirr, the Deafheaven-affiliated shoegaze outfit in San Francisco, responded in kind, but her tenure in the band was short-lived.

Whirr created a minor firestorm beginning in 2013 for crusading against music critics, who typically issued tepid reviews of the band. The band started a blog called Whirr Hates Pitchfork, in reference to the influential website, with insipid criticism of the outlet’s writers, whom Whirr called “dumb out of touch pussies.”

Esfandiari said she understood why Whirr lashed out at its critics. Still, the campaign quickly degenerated into callously insulting the group’s own fans. “That’s not my shit,” she said. “I respect people and respect my fans and give a shit about things like feminism.” It prevailed upon Esfandiari, who remains friendly with the group, to launch a project in which she had more creative control.

Across three EPs released uner the moniker Miserable, Esfandiari’s vocals started to flourish. In choir as a teen, she submitted to the vocal style and content prescribed for women by a lineage of holy men. Screaming, she was taught, was demonic. As Miserable, however, songs such as “Bell Jar” — in which an opiate drawl gives way to menacing mutters before martial snare drum emerges to underpin her cataclysmic shouts — emphasized her range.

Following Miserable, Esfandiari founded King Woman. The name sounds like a rejection of the submissive gender role foisted upon her as a child, and Esfandiari said that her lyrics relay her experience with deprogramming — or losing faith in order to gain the world. At first a solo outlet with rotating collaborators, King Woman issued “Degrida / Sick Bed” — a pair of understated, somnambulant sketches — through Sleep Genius Records in 2013. Next year’s “Dove / Fond Affections” single better prefaced the music on Doubt.

After a tour in support of “Dove,” word of the band’s live prowess reached Jonathan Tuite of Flenser Records, who reached out to make the deal that produced Doubt. And it was live performance, enabled in part by King Woman’s most solid lineup, that fully allowed Esfandiari to shed her inhibitions. “The first night of tour I blacked out screaming over and over on the floor,” she recalled. “It felt like I’d really broken free.”

The way Esfandiari describes purging the vestiges of her childhood faith through primal yelping is eerily reminiscent of a Charismatic Christian convention: Glossolalia, or speaking in tongues. Practitioners describe it as a current of electricity surging down from heaven to twist their tongues in the service of a sacred language. Instead of prayer, Esfandiari’s experience as a performer evokes the parlance of “possession,” which really involves its own sort of faith. On stage at The Rickshaw Stop, maybe Esfandiari channeled a less oppressive and yet wholly supernatural spirit.