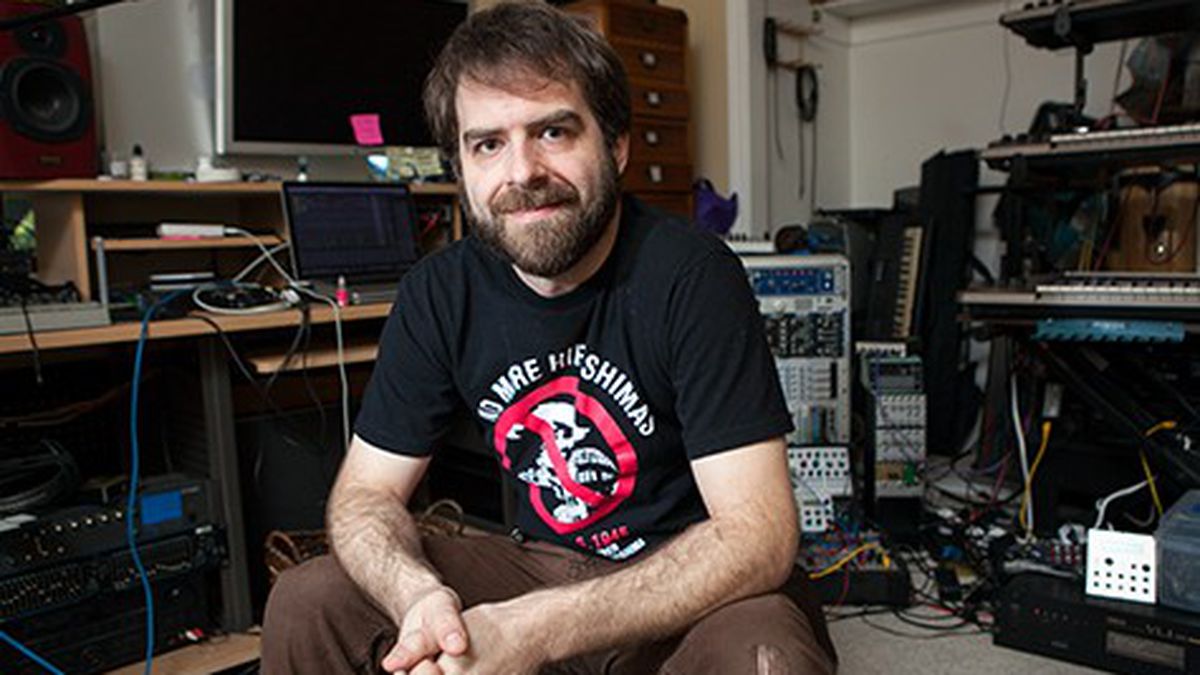 Probing into the Aural Uncanny Valley

On Ambiente, Fluorescent Grey presents a three-part album that uses physical modeling synthesis to challenge the reality of perceived sound.

In August 2004, al-Qaeda terrorists allegedly beheaded a San Franciscan named Benjamin Vanderford. A vague yet gruesome video of the incident was uploaded to two file-sharing sites without context, and soon enough, every media outlet was reporting on it. But Vanderford was, in fact, alive. The video was directed by then 23-year-old Robbie Martin and filmed in a San Francisco apartment with the intention of proving that media coverage should never be taken at face value.

The success of the hoax was a catalyst for Martin’s politicization. (He now contributes to an alternative media site Media Roots, and puts together independent political documentaries using found footage.) But the stunt was also a lesson in the effectiveness of simulation to fool the mind, a concept that Martin is revisiting a decade later as a musician under the moniker Fluorescent Grey.

These days, when not performing at small venues with experimental leanings, Martin is holed up in a tiny studio at his house in Montclair. There, he’s been working on the next addition to a series of albums called Ambiente that offer electronic wanderings into caverns of sound with remarkable depth. At times, rhythmic threads and recognizable aural textures begin to take shape in the dark, but always dissipate before becoming fully formed, leaving the listener engulfed in enigmatic sound sculpture.

Martin’s early work as Fluorescent Grey was dark electronic music that he spliced together with odd samples and field recordings, while maintaining a beat you could bob your head to. Around 2008, he began setting aside drawn-out sound experiments that didn’t fit into his live sets. Slowly, those largely arrhythmic musings began to steal his focus and become content for Ambiente. In 2013, Martin released a limited edition of the three-part compilation through his label Record Label Records. Each portion is titled after one of its key tracks: The Harmoniums Reside in the Caverns of Mercury, The Uncanny Valley, and Ritual at the Super Volcano. They come housed in a custom wooden box with a set of original “art cards” that add samples of texture to the sensory experience. Last month, Martin released the compilation digitally for the first time.

Martin mainly uses Yamaha VL digital synthesizers that were released in the early 1990s and designed to physically model traditional wind and string instruments. They work based on algorithms that use the size of resonant chambers, reed vibration, and breath value as parameters to define their sound. Martin currently has three in his possession, and has designed custom software that allows him to play them all at once.

After the initial hype of the synthesizers’ release, physical modeling synthesis’ buzz subsided, and they became mostly isolated to academic spheres. Today, Martin scours the internet for others composing music with the same technology, but has found few. It’s much easier to sample recorded instruments than to generate the sounds digitally with finicky old tools. But Martin is admittedly obsessed with the challenge of perfecting digital mimicry. He uses the synths to simulate familiar sounds, then mixes them with field recording samples so that the listener is constantly questioning what’s “real,” forcing what was once familiar into ambiguity.

As the series of albums progresses, Martin probes deeper into the aural “uncanny valley,” — a term usually used to refer to animation that is so realistic that it becomes unexpectedly unsettling, exemplified by movies like Polar Express and The Hobbit. The second album, titled after the concept, is almost entirely composed of digitally synthesized sounds that mimic found noises or instruments with an eerie tinge of the unnatural. The song “Physmod” could be heard as guitar feedback over slow chimes and a heavy gong. But beyond an experiment in simulation, the effect is entrancing, with varying degrees of coarseness layered around moments of hollowness.

On Ambiente 4, Martin’s sound so far is emblematic of his recent work — composing a soundtrack for his next documentary. Its eerie orchestra compositions sound remarkably analog. He has found that the best way to make a synthesized instrument sound realistic is to introduce tiny inconsistencies into the composition, so that it sounds more human. But he likes to shift from convincing sounds into sections that are obviously synthesized, to keep the music challenging.

Eventually, Martin has a dream of creating a “wall of sound”-type album that sounds like heavy guitar feedback, and releasing it on YouTube under the name and branding of a fictional metal band — just to see if people will be able to tell the difference. It’s not that he’s always trying to punk everyone, he just gets a kick out of forcing people to question their understanding of what’s “real.”

What Are You Lookin’ At?

Berkeley Bowl Union Gets Off the Mat

Thursday’s Dining Out for Life Fuses Appetizers with Altruism